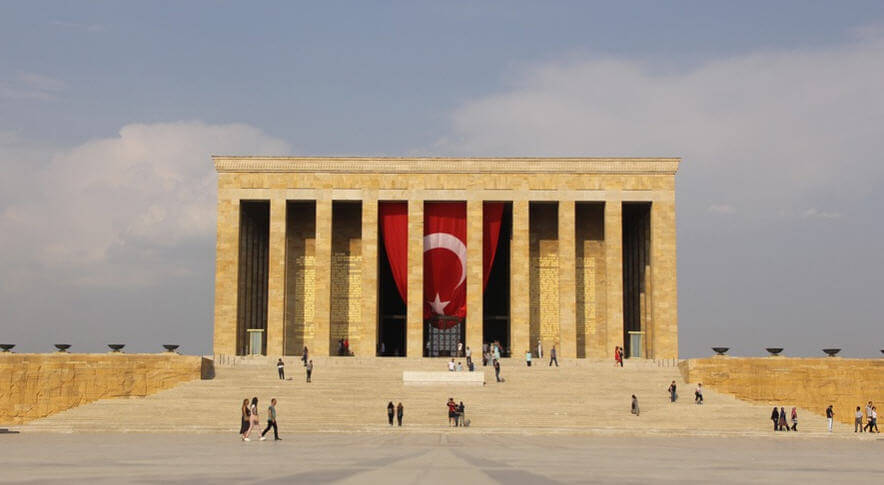 The main entrance is accessible from Anıt Road and there is a rear entrance from Akdeniz Road. The steps from the main entrance lead to a colonnade flanked by Hittite style stone lions that takes you to a central courtyard in the mausoleum. The two towers here; Independence on the left and Freedom on the right house a scale model of the Anit Kabir complex, photographs of before and after construction from 1944 to 1953 and examples of 48 other plans and designs that were submitted and rejected.

The squared-off Neo-classical mausoleum sits in the central courtyard and has huge bronze doors usually flanked by soldiers to ensure that visitors remove their hats before entering as a mark of respect. The interior is surprisingly plain and has some mosaic work but your attention is drawn to the sarcophagus containing Atatürk’s body which was bought here in 1953 from its first resting place at the Ethnographic Museum. On the courtyard opposite is Ismet Inonu’s (1884-1973) tomb, who was Ataturk’s oldest comrade and supporter who served as first prime minister of the Turkish Republic and then President after Ataturk’s death.

The largest hall on the southern side of the courtyard is the Ataturk Museum displaying a range of personal items from his wardrobe to his exercise equipment and gifts presented to him; a diamond encrusted sword from the shah of Iran and an exquisite toilet set from the king of Afghanistan. His medals and decorations are also here along with other personal items given to the museum by his adopted children. The hall next door has Ataturk’s cars that were used for personal and official business.

The information centre nearby, offers a large selection of Ataturk clocks, key-rings, ashtrays and other esoteric souvenirs.