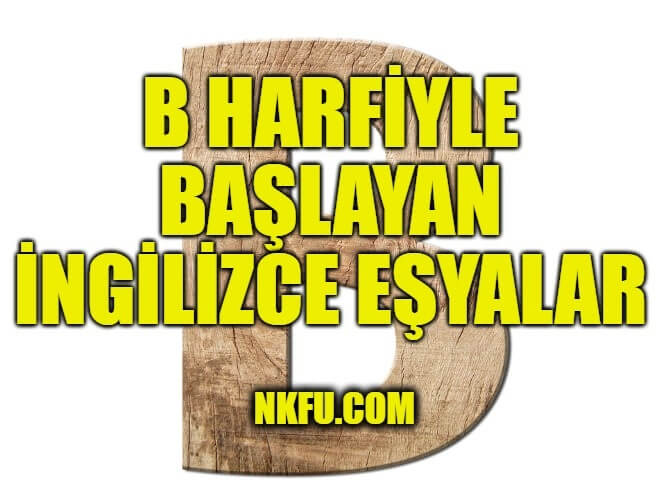 A bottle equipped with a teat, used for feeding infants.
Türkçesi: biberon

a badge is a distinct mark, identifying signal or mark of allegiance.
Türkçesi: Rozet

Bag is defined as a container that can store items or be used to carry items.
Türkçesi: çanta

a platform with a railing that sticks out from the outside wall of the upper floor of a building.
Türkçesi: balkon

a round object in the shape of a sphere or any sport that uses such an object in its play.
Türkçesi: top

a balloon is material such as rubber, silk or plastic which can be filled with air or gas.
Türkçesi: balon

barbecue is something used for cooking out-of-doors over coals or fire, or is food that has been cooked that way.
Türkçesi: barbekü

a barometer is a device that measures the pressure of the atmosphere as an aid to predicting weather.
Türkçesi: Barometre

a barrel is a unit measurement used in certain industries to signify how much material can be held inside a large round container.
Türkçesi: Fıçı

a container made of interwoven cane, rushes, strips of wood, etc. and often having a handle or handles
Türkçesi: sepet

a beating or blow with a stick, usually on the soles of the feet, esp. as a method of punishment
Türkçesi: Falaka

A loose-fitting robe worn before and after bathing and for lounging.
Türkçesi: Bornoz

bead is a small piece of plastic, glass or wood, often round in shape, with a hole in the center for threading, which is used for making objects such as jewelry.
Türkçesi: boncuk

A wide cylindrical glass vessel with a pouring lip, used as a laboratory container and mixing jar.
Türkçesi: deney şişesi

The definition of a bed is a piece of furniture on which to lie or sleep.
Türkçesi: yatak

bedspread means a piece of decorative cloth that covers the place where you sleep.
Türkçesi: Yatak örtüsü

a framework for supporting the bedspring and mattress of a bed
Türkçesi: Karyola

a hollow object, usually cuplike, made of metal or other hard material which rings when struck, as by a clapper inside
Türkçesi: çan, Zil

a strip or band of leather or other material worn around the waist to hold clothing up, support tools, etc., or as an ornament or sign of rank
Türkçesi: kemer

a long, hard seat or work table, or an official’s seat.
Türkçesi: Bank

a round, flat cap of felt, wool, etc.
Türkçesi: bere

A bundle of twigs attached to a handle and used as a broom.
Türkçesi: Çalı süpürgesi

A piece of cloth or plastic secured under the chin and worn, especially by small children, to protect the clothing while eating.
Türkçesi: önlük

a bicycle is a two-wheeled vehicle with one wheel in front of the other which is propelled using foot pedals.
Türkçesi: bisiklet

The definition of bijouterie refers to trinkets or jewelry.
Türkçesi: Bijuteri

a bike is a two-wheeled vehicle with one wheel in front of the other which is propelled using foot pedals.
Türkçesi: bisiklet

a box or other receptacle, or an enclosed space, esp. for storing foods or other articles for a time
Türkçesi: kutu

A hand-held device consisting of a series of lenses and prisms, used to magnify objects so that they can be better seen from a distance, and looked at through both eyes.
Türkçesi: dürbün

An airplane having two pairs of wings fixed at different levels, especially one above and one below the fuselage.
Türkçesi: çiftkanatlı uçak

blanket is something that covers all cases or all instances of something.
Türkçesi: battaniye

A blouse is defined as a loose-fitting garment resembling a shirt that is usually worn by women, peasants or workers.
Türkçesi: bluz

a vessel used to carry people or cargo on water, or a boat-shaped serving dish.
Türkçesi: tekne

a bodice is the part of a woman’s dress above the waist, or a vest that often laces up.
Türkçesi: korse

a bolt is defined as a bar or rod used for locking or joining two things together.
Türkçesi: Civata

a story or collection of stories that can be read.
Türkçesi: kitap

a boot is a type of shoe or foot covering that covers part of the leg as well.
Türkçesi: çizme

a bottle is a container with a neck that holds liquids.
Türkçesi: şişe

a bow is anything curved or bent, especially a device used for shooting arrows.
Türkçesi: yay

a bowl is a deep circular dish, or something in that shape.
Türkçesi: çanak

a box is a container typically made of cardboard or wood.
Türkçesi: kutu

A woman’s undergarment worn to support the breasts.
Türkçesi: Sütyen

An ornamental band or chain encircling the wrist or arm.
Türkçesi: bilezik

a brake is a device used to slow down or stop a vehicle or machine.
Türkçesi: Fren

An implement used for sweeping, typically consisting of a bunch of stiff synthetic fibers or broomcorn stalks, or formerly twigs or straw, bound together and attached to a handle.
Türkçesi: süpürge

a brush is a tool with bristles on a handle, the process of using such a tool or the act of lightly sweeping something.
Türkçesi: fırça

a bucket is a round and deep container used for carrying things.
Türkçesi: kova

a buckle is a clasp used for fastening or closing.
Türkçesi: Toka

a bugle is a brass horn instrument like a trumpet without keys or valves.
Türkçesi: borazan

a tractor with a large, shovel-like blade on the front, for pushing or moving earth, debris, etc.
Türkçesi: buldozer

a bullet is a small ball or cone-shaped projectile which is shot from a gun, or a solid dot at the beginning of a line of type for emphasis.
Türkçesi: kurşun

a bundle is a group of objects held together tightly.
Türkçesi: Bohça

a shelflike bed or berth built into or against a wall, as in a ship
Türkçesi: Ranza

a bus is a large, long motor vehicle that carries a lot of passengers, usually on a regular route.
Türkçesi: otobüs

a button is a small disk used for fastening two parts of a garment, or is used to operate something.
Türkçesi: düğme