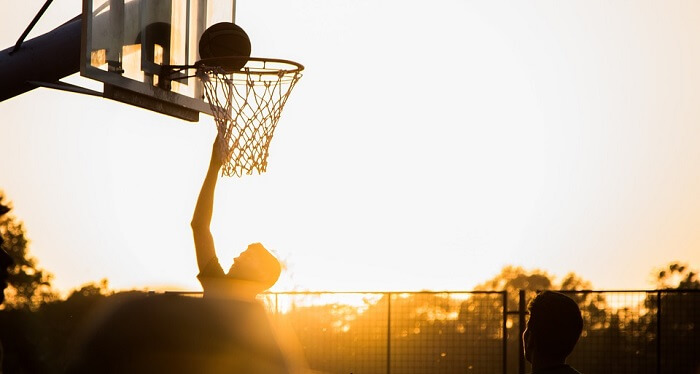 Overview of the Court

A basketball court consists of two basketball hoops on opposite ends of the court. The court divides in half down the center, with one half belonging to each team as the team’s offensive end of the court. Each team plays to make baskets in the hoop on their offensive end of court. Also, each team must play defense to try to prevent the other team from making baskets in the other team’s basketball hoop.

A standard basketball team consists of five players. Teams can also have fewer players as long as the teams have equal numbers. An informal basketball game might be one-on-one or two-on-two. Teams can also include three or four players. In a five-player team, the positions include one center, two forwards and two guards.

As players move the ball up, down and around the court, they must either throw it or dribble it on the floor while walking or running. Carrying the ball for more than two steps without dribbling it is a “traveling” violation. Dribbling the ball, stopping and then starting to dribble again is a “double dribble” violation. Players must always keep their hands on top of the basketball when dribbling — never underneath it. Holding the ball from underneath is a “carry” violation. Players might commit fouls if they interfere with play illegally or if they have illegal contact with a player on the opposing team. If an official calls a foul, the opposing team might get the ball or they might get free throws.

Players can score between one and three points per basket, depending on the kind of shot and the location of the player. Free throws earn one point and they are awarded to teams as a result of personal fouls against the opposite team. Baskets earning two points occur when a player shoots from inside the 3-point line marked on the floor surrounding the basket. Baskets earn three points when a player shoots from outside the 3-point line surrounding the basket.