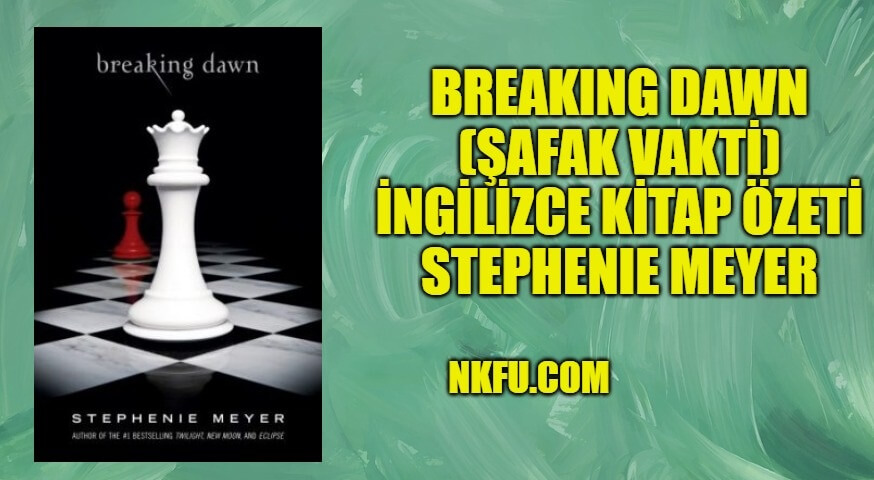 The story Breaking Down is divided into three invidual books. During part 1 we read about Bella’s wedding and marriage to Edward. They spend their honeymoon on a remote island near the coast of Brazil. During their stay, Bella’s wish comes true when she and Edward make love. Shortly after, Bella becomes aware of her pregnancy when she misses a period. She contacts Carlisle who confirms her suspicions, the couple make plans to return soon after. The fetus develops rapidly, an occurrence that prompts Edward to request she gets an abortion. Unperturbed, Bella resists his pleas and contacts her friend Rosalie, who has wanted children for a long time.

Part two is written from Jacob Black’s perspective, it documents the pregnancy of Bella right through to the birth of her child. The werewolves in the novel are unsure of the child and fear of the danger it poses prompts them to make plans to kill Bella to prevent it’s birth. Naturally, Jacob is strongly opposed to this and revolts. He cuts all ties to the pack and forms his own alongside Leah Clearwater and Seth. Four weeks after conception Bella gives violent birth to the child. In the process she loses a great deal of blood and suffers multiple broken bones. To save her life Edward is forced to embrace and turn her into a vampire. Immediately after the birth Jacob imprints the newborn baby girl Renesmee.

The final part of Breaking Dawn

The final part of Breaking Dawn reverts back to Bella’s view point, continuing her story as an excited Vampire who enjoys all the abilities it brings. Irina, another Vampire mistakenly identifies the baby; she believes Renesmee is an “immortal child, one that has been changed to a Vampire. An act the Volturi outlawed previously. Irina informs the Volturi of the act, they then decide to destroy the Cullens and baby Renesmee based on Irina’s allegations. To prove their innocence and save the life of their baby daughter the Cullens gather vampires to stand up as witnesses and help prove to the Volturi the child isn’t an immortal child.

The ploy works, the Volturi realize they have been lied to by Irina and immediately sentence her to execution for the mistake. She is killed shortly after. Despite the news of the childs true nature being revealed they are still unsure as to the threat the childs existence brings to the secret lives of vampires. Soon after, the arrival of Jasper and Alice, who too had a human-vampire child return. They prove the child presents no threat with Nahuel, their 150 year old crossbreed son. The Volturi see the truth in these words and promptly leave, safe in the knowledge that vampire-human crossbreeds can co-exist without bringing any undue attention on the vampire’s existence. Bella, Edward and their daughter Renesmee return safely to their home.