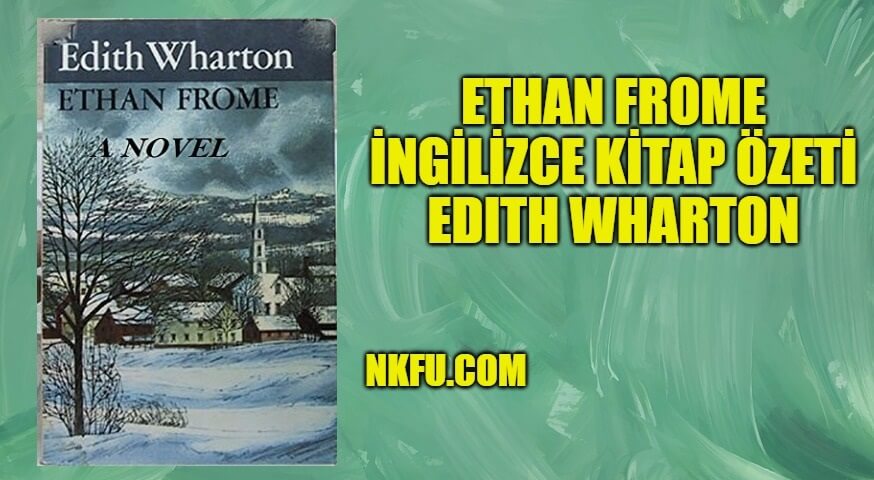 This book was written in 1911 by Edith Wharton. It’s weird because Edith Wharton was this rich lady who lived in New York and she wrote a book about the sad life of some poor farmer in New England. How would she know anything about poor farmers? Who cares? There’s no deep symbolism with the title obviously. And yes, this book is set in New England but unfortunately nobody says that something is “wicked good”.

Narrator: He is a young engineer/electrician dude. He is in Ethan’s town with some time to kill. He is curious about Ethan so he asks around about him. Then he kinda tells the reader what he has learned.

Ethan Frome: He is the main dude of the story. This whole story is about the poor choices he made and what a crappy life he turned out to have. He started out really well. He studied in college and loved nature. then he got called back to the farm to work and it was all downhill from there. He’s a smart guy, maybe a bit of a pushover. We know he has a conscience because instead of running off with Mattie, he stays with Zeena.

Zenobia (Zeena) Frome: No, she’s not the princess warrior. Zeena is Ethan’s cousin. Then she become his wife. She is a HUGE bitch and basically ruins Ethan’s life. She controls him from the time they got married until the present day. They didn’t marry because of love..Ethan kinda married her because he owed for because she took care of his mommy. Ethan could have left Zeena, but guys were old fashioned back then and actually respected their “till death do we part” thing no matter how ANNOYING their wives were.

Mattie Silver: Mattie is a distant cousin of Zeena’s. Mattie is pretty and energetic. But she sucks as a housekeeper. Ethan falls in love with her. Mattie wants to commit suicide via sled in the end but she just ends up crippled.

This book takes place in New England during winter. When it starts off, Ethan Frome is this lonely old man (52 yr. old) who is depressed and doesn’t do much in life. Then one day there is a blizzard in the town and some young electrician dude stays in Ethan’s house. the young guy is pretty interested in Ethan. Then the young man tells the reader what he has learned about Ethan.

When Ethan was a young lass (18) he went to college and studied science. Then his dad died and Ethan had to drop out and come back to run the family farm. Ethan works hard but the farm doesn’t make alot of cash. Then his mom gets sick and he takes care of her. Finally he gets a little help. His cousin Zeena Pierce comes to help take care of Ethan’s mommy. Then Ethan asks Zeena to marry him cause he doesn’t wanna be all alone after his mommy dies.

Then Zeena gets sick. She sits around all day.

Ethan works hard to keep the farm going and to pay for Zeena’s medicine. He realized he really screwed up by marrying Zeena. Then this other chick comes named Mattie Silver (a cousin of Zeena’s). She move sin to help take care of Zeena. Ethan REALLY likes her…but Zeena hates her. Zeena wants to fire her ass..but Ethan doesn’t want her too. Now see the pickle Ethan is in? He doesn’t want her to leave but he can’t stick up for her too much because then Zeena will find out how he has the hots for Mattie.

Ethan wants to tell Mattie how he has the hots for her..but he is too nervous. Mattie wants to tell Ethan the same thing but she’s nervous too. Then one day Zeena goes on a trip to see some new doctor. Ethan is happy to be rid of her. He thinks she’s gonna blow alot of cash on new medicines. He hopes she dies. When Zeena leaves..Ethan and Mattie are home alone. Then the cat breaks some fancy glass dish that belongs to Zeena. They are scared because they know Zeena will be pissed.

Zeena comes back before Ethan can glue the thing back together.

Zeena comes back before Ethan can glue the thing back together. Zeena IS pissed and she yells at Ethan and Mattie. Then she tells them that she is SO sick that the doc said she can’t do any housework at all. Then Zeena tells Ethan she has hired a new chick to come help. This means Mattie will have to leave. Ethan gets mad and almost bitchslaps Zeena.

Mattie is sad because she has no place to live. Then Ethan comes up with a plan. He will elope with Mattie, divorce Zeena and move out West. He writes a letter to Zeena telling her “so long sucker”….then he realizes his broke ass doesn’t have the cash to move out West. Then he has a plan to get some cash. He plans to find some builder dude (Mr. Hale) who owes Ethan money for some lumber Ethan gave him. The bill isn’t due for 3 months, but Ethan plans to lie and say that he needs the money now for his sick wife Zeena.

He sees the builder guy’s wife (Mr. and Mrs. Hale) on his way to get the cash.

She tells Ethan that she understand his pain in dealing with the very sick Zeena and she admires him for sticking by her. Ethan is now feeling SUPER guilty. He can’t believe he was gonna lie to Mr. Hale. Ethan doesn’t get the cash. Instead he goes home and decides he will work on his farm the rest of his life.

Then Ethan has to say goodbye to Mattie. Cause he has decided to live on the farm. He drives her to the train station. They both tell each other how they have the hots for each other yadda yadda yadda. Then they go sledding (yeah..that makes sense). After they go down once, Mattie tells Ethan she wants to sled down the hill together and die. Ethan agrees that death would be better than going home to his bitch of a wife. So they sled down the hill and hit a tree. But they both survive.

Then the electrician dude stops narrating. The story gets back to present time when Ethan is an old due. There is an old woman serving him dinner. that is Zeena. We find out what happened after the sled crashed. Mattie got a severe spinal injury and lived with Ethan and Zeena the rest of her life as a cripple. That same night Zeena miraculously recovered and now takes care of Mattie. Zeena and Mattie still complain at each other and Ethan hates his life. The last part of the books is when the electrician’s landlady says that it would have been better for Ethan if Mattie would have dies in the sled crash. At least they wouldn’t have to take care of her.