In football, teams consist of 11 players. Each team tries to get the ball into the opposing teams end zone. There are 3 types of teams: Offensive, Defensive, and Special teams.

Offensive players are separated into the following groups: 7 linemen who play on the line of scrimmage, or the line where the bal is located; and backs who are placed in different positions behind the linemen. The Linemen are designated in the following ways: 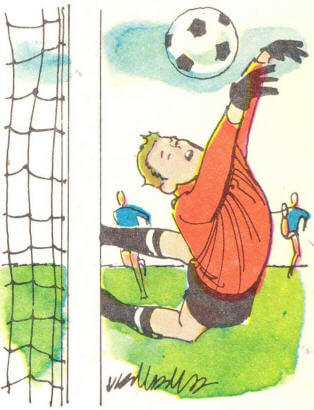 Special teams usually consist of players who only play in certain part of the game. For example, the kicker only plays at the beginning or half of the game and tries to kick the ball through the goal posts. The punter kicks the ball downfield only when the offensive team has to surrender it.

A team of seven officials usually looks over a football game. They include: a referee, an umpire, a linesman, a field judge, a line judge, a side judge, and a back judge. They enforce the rules. The referee is mainly the head of the outfit decided the calls etc. The umpire questions uniforms equipment etc. The linesmen mostly mark the balls at the end of each play. The field judge mainly times the game. 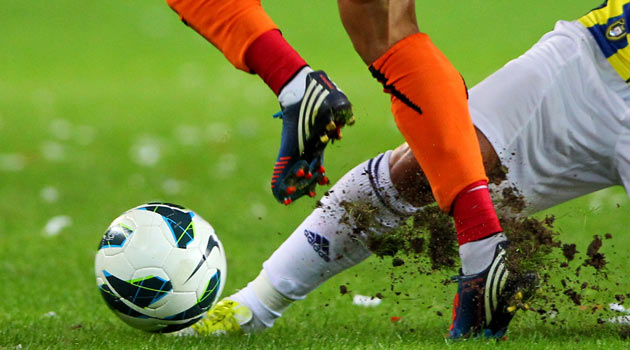 The football itself is an extended oval spheroid that weighs between 14 and 15 oz. The white rings on football help the players grasp it. Beneath the player’s uniform and pants he wears a series of pads for protection. These protect the players on the field from bodily injuries. The players usually wear cleats that provide traction. The player’s helmet protects the player’s head from injury. It has a strap on it that helps a player keep it on. It also has a facemask and holes in the side that allow a player to hear.

A football game usually consists of 4 separate quarters. Two make up the separate halves. The halftime period is usually 15 minutes. The teams change sides after half time. At the start of a game the two teams decided who would kick first. In the NFL, the kick takes place at the kicking teams 30-yard line. Before the player kicks it the other teams spreads out in an effort to intercept the ball. If a player on the receiving team intercepts the ball he may run down the field with it. If he is tackled and stopped this is known as a down.

This is official when one the tackled players knees touches the ground. The ball is the placed on the line where the player was downed. When scrimmage takes place, the ball put back into play. Before scrimmage the teams huddles and discusses which plays to use etc. after huddles they line up with each other opposite on the line of scrimmage. If the quarterback decides a new play coded signals are announced. The play begins when the center hikes the ball.

Different passes are used in the game as well.

The forward pass is happens when the quarterback throws the ball directly downfield. The back ends and other players try to catch it and score. A lateral play can be made anywhere to anyone on the field. The defense team has to stop the other team from advance or stop the offence from getting to the line of scrimmage. The offense team has to advance the ball 10 yards in 4 tries called downs. Teams usually punt on the forth down. The defense can gain possession of the ball by recovering fumbles of intercepting it in throws.

The games objective is to score more points than the opposing team. When you make touchdown in football, a player carries the ball into the end zone. This is worth 6 points. Extra-point conversion only happens after a touchdown and allows the team to get a few more points. Kicking field goals are worth 3 points if they make it throw the goal post. This usually takes place on the last down and when a ball is 35 yards near the goal line. The defense team can earn 2 safety points when the ball is behind the opponent’s goal line. When the offensive team is permitted to down the ball intentionally behind it’s own line, it is called a touchback and is awarded no extra points. Tiebreaker games can be decided by sudden death rounds, (when the first team to score is the winner) or in overtime periods.