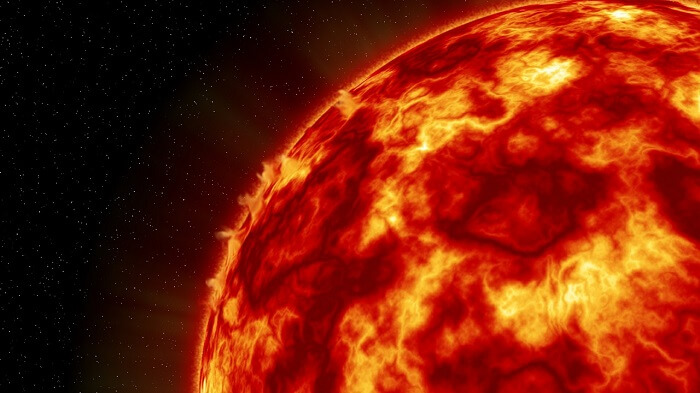 The Sun (or Sol), is the star at the centre of our solar system and is responsible for the Earth’s climate and weather. The Sun is an almost perfect sphere with a difference of just 10km in diameter between the poles and the equator. The average radius of the Sun is 695,508 km (109.2 x that of the Earth) of which 20–25% is the core.

One million Earths could fit inside the Sun.

The mass of the Sun is approximately 330,000 times greater than that of Earth. It is almost three quarters Hydrogen, whilst most of the remaining mass is Helium.

The Sun is an almost perfect sphere.

There is only a 10 kilometre difference in its polar diameter compared to its equatorial diameter. Considering the vast expanse of the Sun, this means it is the closest thing to a perfect sphere that has been observed in nature.

The temperature inside the Sun can reach 15 million degrees Celsius.

At the Sun’s core, energy is generated by nuclear fusion, as Hydrogen converts to Helium. Because hot objects generally expand, the Sun would explode like a giant bomb if it weren’t for its enormous gravitational force. The temperature on the surface of the Sun is closer to 5,600 degrees Celsius.

Eventually, the Sun will consume the Earth.

When all the Hydrogen has been burned, the Sun will continue for about 130 million more years, burning Helium, during which time it will expand to the point that it will engulf Mercury and Venus and the Earth. At this stage it will have become a red giant

The Sun will one day be about the size of Earth.

After its red giant phase, the Sun will collapse, retaining its enormous mass, but containing the approximate volume of our planet. When this happens, it will be called a white dwarf.

Light from the Sun takes eight minutes to reach Earth.

With a mean average distance of 150 million kilometres from Earth and with light travelling at 300,000 kilometres per second, dividing one by the other gives us an approximate time of 500 seconds, or eight minutes and 20 seconds. Although this energy reaches Earth in a few minutes, it will already have taken millions of years to travel from the Sun’s core to its surface.

The Sun travels at 220 kilometres per second.

The distance from the Sun to Earth changes throughout the year.

The Sun is middle-aged.

At around 4.5 billion years old, the Sun has already burned off about half of its store of Hydrogen. It has enough left to continue to burn Hydrogen for approximately another 5 billion years. The Sun is currently a type of star known as a Yellow Dwarf

The Sun has a very strong magnetic field.

Solar flares occur when magnetic energy is released by the Sun during magnetic storms, which we see as sunspots. In sunspots, the magnetic lines are twisted and they spin, much like a tornado would on Earth.

This is a stream of charged particles, which travels through the Solar System at approximately 450 kilometres per second. Solar wind occurs where the magnetic field of the Sun extends into space instead of following its surface.