ABDULHAMID II (1842-1918), was the 34th ruler of the Ottoman empire. The son of Abdul-Medjid I and Tirimujgan, a Circassian, he was born on Sept. 21, 1842. He came to the throne during one of the most critical periods in the later history of the empire. The Tanzimat (reorganization) reform edicts, proclaimed first in 1839 and expanded in 1856, had prepared the ground for constitutional change and liberalization of the state. A group of ministers, including the constitutionalist Midhat Pasha, deposed Abdul-Aziz in May 1876 and placed his nephew Murad V on the throne. Murad’s deranged mind necessitated his removal from the throne. Abdul-Hamid had declared himself in favor of constitutional government, and the fact that he had been associated with the liberal Society of New Ottomans won the confidence of the liberals, who placed him on the throne on Sept. 1, 1876.

To fulfill guarantees he had made before his accession, Abdul-Hamid proclaimed the first Ottoman constitution on Dec. 23, 1876. The constitution provided for a bicameral parliament, which met for the first time on March 17, 1877. It survived less than a year; Abdul-Hamid used a disastrous war with Russia as a pretext for closing it on Feb. 13, 1878.

The Treaty of Berlin (July 13, 1878), which ended the Russo-Turkish War, reduced Ottoman territory and led to increased national agitation among the sultan’s non-Muslim subjects. Abdul-Hamid spent the next few years consolidating his position. In 1881, Midhat Pasha and several of his supporters were tried for the alleged murder of Abdul-Aziz. Midhat was convicted and banished to Arabia, where he was murdered in 1883, apparently on the sultan’s orders. His disappearance reduced the activities of the sultan’s foes. Many took refuge in Europe or went underground, keeping alive the desire to return to constitutional government. Both the inability of the liberals to agree on a course of action and the efficiency of Abdul-Hamid’s secret poliçe allowed him to stay in power. 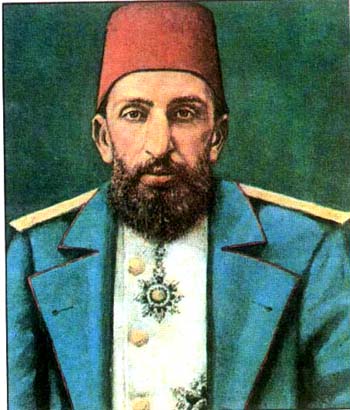 Despite his bitter hostility to constitutional and liberal ideas, Abdul-Hamid accepted some Westernization and reform in certain areas. Many administrative, legal, and educational reforms begun in earlier reigns were continued and actually speeded up during his reign. His greatest achievements were in education. He increased the number of secular schöols training badly needed technicians and civil servants, and he established the University of istanbul (1900).

Although he was less successful in reforming the empire’s legal and fiscal systems, Abdul-Hamid effected great advances in communications as part of his attempt to centralize power in his own hands. He personally presided over the improvement and expansion of rail and telegraph services. In 1888, Hungary was linked with istanbul and Ankara as part of the Baghdad Railroad project. In keeping with his pan-Islamic policy of uniting ali Muslims around himself as caliph, Abdul-Hamid also sponsored the Hejaz Railway to the holy places in Arabia. The railway was built by popular subscription. The press, although greatly restricted by state censorship, developed swiftly and contributed significantly to the literacy and political awareness of the public. At the same time the output of books was almost doubled, chiefly in the fîelds of literatüre and education.

Rebellion. Meanwhile, dissatisfaction with Abdul-Hamid’s rule continued to grow. Westerners called him “Abdul the Damned” and “Bloody Abdul.” The Young Turk movement, an outgrowth of the earlier Society of New Ottomans, hoped to reinstate the constitution of 1876. Although hampered in their activities by factional dissensions and official repression, the Young Turks achieved some degree of unity when they succeeded in organizing the Committee of Union and Progress in 1907. Finally, on July 24, 1908, a revolt precipitated by the fear that the empire would lose more European provinces through the machinations of the great powers forced Abdul-Hamid to restore the suspended constitution of 1876. He remained on the throne but was suspected of intriguing with reactionary elements that staged an unsuccessful counterrevolution. This led to his deposition on April 28, 1909. The last of the strong sultans, he died in istanbul on Feb. 10, 1918.