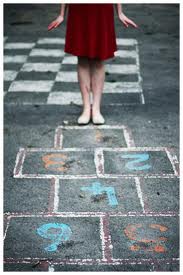 There are as many different hopscotch course layouts as there are playgrounds. But they all have some common features.
– A line of squares proceeding vertically out from the start position
– Pairs of horizontal squares occassionaly breaking up the vertical line
– A semi-circular safe spot at the end of the course where the player can turn around and come back
– A number in each square indicating which order they must be stepped in
Draw the course out on the floor with six, ten, or more spaces depending on the age of the players and how complex you want the game to be.

To begin, the first player tosses their marker onto square one. They must hop over that square and land on squares two and three with one foot in each. Next, they hop on one foot and land on square four, then jump and land on two feet in squares five and six and so on until they reach the end, square ten. There they must turn around by hopping on one foot and come back the same way they went up, stopping on squares two and three to pick up their marker from square one. Next, they hop to square one and out of the grid. If no mistakes were made, the same player continues by tossing their marker to square two and repeats the process, always avoiding contact with the square that contains the marker.

A player’s turn ends when one of the following happens:
– Marker does not land on the intended or correct square
– Player loses balance and places hand or second foot down
– Player steps on a line
– Player hops on wrong square or square containing a marker
– Player puts both feet down in a single box
When a turn ends, the player places their marker in the last completed square and goes to the back of the line. It’s now the next player’s turn, but they must avoid their own marker as well as the first player’s marker by hopping over the occupied square