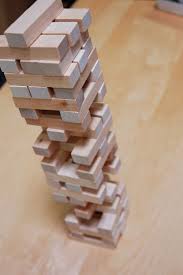 Jenga is played with 54 wooden blocks. Each block is three times as long as its width, and one fifth as thick as its length 1.5 × 2.5 × 7.5 cm (0.59 × 0.98 × 3.0 in). To set up the game, the included loading tray is used to stack the initial tower which has 18 levels of three blocks placed adjacent to each other along their long side and perpendicular to the previous level (so, for example, if the blocks in the first level lie lengthwise north-south, the second level blocks will lie east-west).

Once the tower is built, the person who built the tower gets the first move. Moving in Jenga consists of taking one and only one block from any level (except the one below the incomplete top level) of the tower, and placing it on the topmost level to complete it. Only one hand should be used at a time when taking blocks from the tower. Blocks may be bumped to find a loose block that will not disturb the rest of the tower. Any block that is moved out of place must be returned to its original location before removing another block. The turn ends when the next person to move touches the tower or after ten seconds, whichever occurs first.

The game ends when the tower falls in even a minor way—in other words, any piece falls from the tower, other than the piece being knocked out to move to the top. The winner is the last person to successfully remove and place a block.