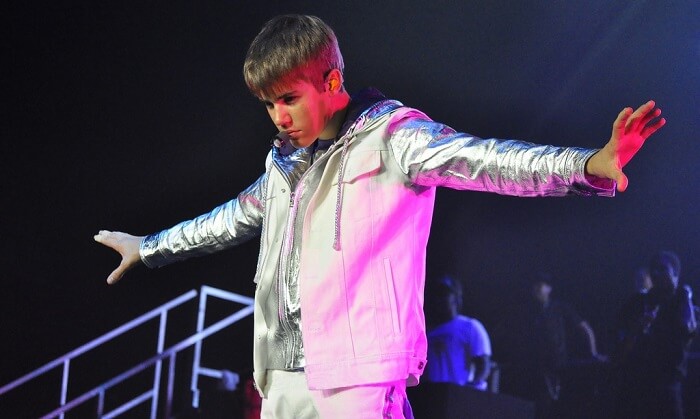 Justin Bieber is a pop singer who burst onto the music scene in 2009 at the age of fifteen. He’s had many hit singles and albums since and had become a major pop star.

Where did Justin grow up?

Justin was born in London Ontario on March 1, 1994. He grew up and was raised by his mom in Stratford, Ontario. He had a strong interest in music at a young age and learned how to play the drums, guitar, and piano by himself. He clearly had some natural musical talent! His mom started recording videos of him singing and playing songs. She would post them on You Tube. This worked out very well as Justin was later discovered when a music executive saw one of his videos on You Tube.

Justin was first discovered by music executive Scooter Braun. Story has it that he clicked on one of Justin’s You Tube videos by accident and liked what he saw. He told the artist Usher about Justin and Usher would later help sign Justin to a record deal. Justin’s first hit single was called One Time. After that he released his first full album called My World. My World was a huge success. With his debut album, Bieber made history being the first artist to have seven songs on his first album to be listed on the Billboard Hot 100. In 2010 Bieber released the second part of his debut album called My World 2.0. His success didn’t fade as this album had his biggest song yet entitled Baby. At one point Baby was the most watched You Tube video ever!

Has Justin performed on any TV Shows?

The list of TV shows that Justin has been on during his short career is astounding. Here is a list of some of them: Saturday Night Live, the David Letterman Show, Kids Choice Awards, the Ellen DeGeneres Show, Nightline, Lopez Tonight, the Today Show, and Good Morning America. List of Justin Bieber Albums 2009, My World 2010 My World 2.0 2010 My World Acoustic, Under the Mistletoe (2011), Believe (2012), Purpose (2015)