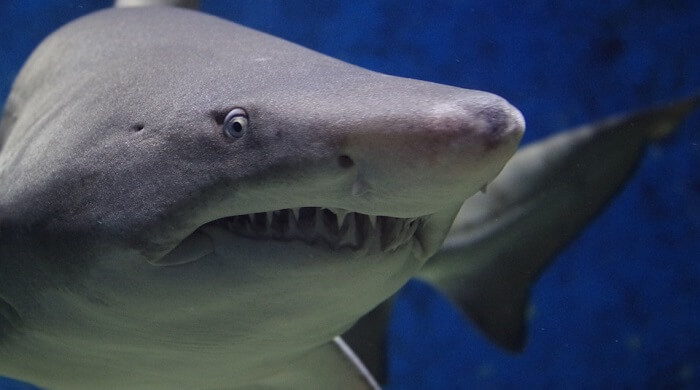 Sharks are a superorder of fish, the Selachimorpha. They, like other Chondrichthyes, have skeletons made of cartilage instead of bone. Cartilage is tough, rubbery material which is less rigid than bone. Cartilaginous fish also include skates and rays.

There are more than 350 different kinds of sharks, such as the great white and whale sharks. Fossils show that sharks have been around for 420 million years, since the early Silurian. The great white shark is one of the biggest sharks.

Most sharks are predators, meaning they hunt and eat fish, marine mammals, and other sea creatures. However, the largest shark eats krill, like whales. This is the whale shark, the largest fish in the world. It is widely believed that sharks are “silent-killers” but in a recent study it has been proven that sharks emit a low/soft but evident growl from their throats resonating through their scales. Some common kinds of shark include the hammerhead shark, the great white shark, the tiger shark, and the mako shark. Most sharks are cold-blooded but some, like the great white shark and the mako shark are partially warm-blooded.

Bull sharks are the most dangerous sharks in the world, according to many experts. This is because they’re an aggressive species of shark, and they tend to hunt in waters where people often swim: along tropical shorelines. 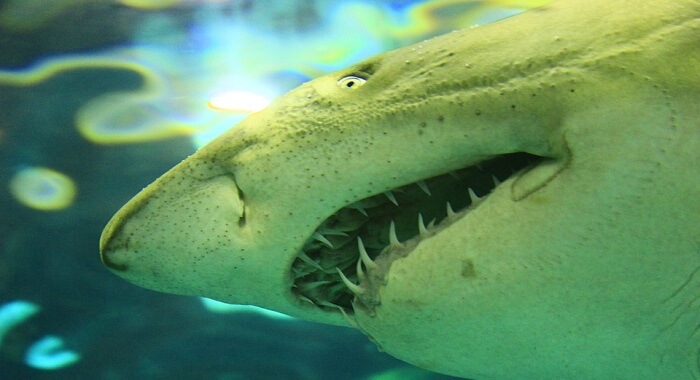 When a great white shark is born, along with up to a dozen siblings, it immediately swims away from its mother. Baby sharks are on their own right from the start, and their mother may see them only as prey. At birth the baby shark is about 5 feet (1.5 meters) long already; as it grows it may reach a length three times that. The pup (which is what a baby shark is called) will live its life at the top of the ocean’s food chain. But before it grows larger, the pup must avoid predators bigger than it is—including other great white sharks. Many baby sharks do not survive their first year. Young great white sharks eat fish (including other sharks) and rays. As it grows, the shark’s favorite prey becomes sea mammals, especially sea lions and seals.

Hammerhead shark hunts alone, and can find stingrays that hide under the sand on the seafloor. Hammerheads also eat bony fishes, crabs, squid, lobsters, and other sea creatures. The upper sides of these fish are grayish-brown or olive-green and they have white bellies. They have very impressive triangular, serrated teeth—like the edge of a saw’s blade. Hammerheads’ mouths are on the underside of their heads.

Sand tiger sharks are also known as sand tigers and gray nurse sharks. Like all sharks, they breathe underwater, through their gills. But sand tigers have one unique habit. They are the only sharks that come to the surface to gulp air, but not to breathe. The air ends up in its stomach. The air makes the shark more buoyant, so it can float motionless in the water as it watches for prey.

Goblin sharks are a species of fish that usually live at the bottom of the ocean along continental shelves (or a continent’s edges). These pink animals can grow 12 feet long and weigh up to 460 pounds. They have narrow snouts and fanglike teeth. Spotted mostly off the coast of Japan, they’re named for their likeness to mythical goblins that appear in Japanese folklore. Scientists don’t know much about the behavior of these rarely seen animals. But they believe that goblin sharks are solitary, just like many other shark species. They also think the fish are most active in the morning and evening. These animals are likely sluggish creatures, which can make it hard to chase food. Luckily for the slowpokes, their special extendable jaws give them some extra bite.