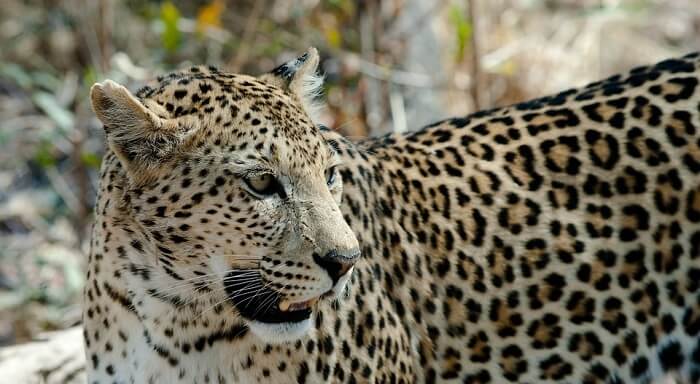 This is one cat that doesn’t need any help getting down from a tree. The leopard is so comfortable up there that it often stalks prey and even hauls its kills up into the branches.

Leopards are powerful big cats closely related to lions, tigers, and jaguars. They live in sub-Saharan Africa, northeast Africa, Central Asia, India, and China. However, many of their populations are endangered, especially outside of Africa.

You can identify most leopards by their light color and distinctive dark spots. Those spots are called rosettes, because they resemble the shape of a rose. These patterns camouflage their bodies as they move through the grass and trees. Black leopards, which appear to be almost solid in color because their spots are hard to distinguish, are commonly called black panthers.

Unlike lions, leopards are solitary creatures. Males are almost entirely solitary and females only break their solitude when they are raising cubs. But, like lions, leopards roar. Male leopards defend their territory by roaring and scent marking, while females use their roar to attract mates and call their cubs. A leopard roar is a rough rasp, like a handsaw cutting wood.

Leopard cubs are born with barely visible spots. The mother hides her cubs and moves them from one safe location to the next until they are old enough to begin playing and learning to hunt. When the cubs are about two years old, they live on their own. But the maternal bonds are strong, and offspring sometimes have reunions with their mothers.