A hoodoo (also called a tent rock, fairy chimney, or earth pyramid) is a tall, thin spire of rock that protrudes from the bottom of an arid drainage basin or badland. Hoodoos typically consist of relatively soft rock topped by harder, less easily eroded stone that protects each column from the elements. They generally form within sedimentary rock and volcanic rock formations.

Hoodoos are found mainly in the desert in dry, hot areas. In common usage, the difference between hoodoos and pinnacles (or spires) is that hoodoos have a variable thickness often described as having a “totem pole-shaped body”. A spire, on the other hand, has a smoother profile or uniform thickness that tapers from the ground upward. An example of a single spire, as an earth pyramid, is found at Aultderg Burn, near Fochabers, Scotland.

Hoodoos range in size from the height of an average human to heights exceeding a 10-story building. Hoodoo shapes are affected by the erosional patterns of alternating hard and softer rock layers. Minerals deposited within different rock types cause hoodoos to have different colors throughout their height.

Hoodoos typically form in areas where a thick layer of a relatively soft rock, such as mudstone, poorly cemented sandstone, or tuff (consolidated volcanic ash), is covered by a thin layer of hard rock, such as well-cemented sandstone, limestone, or basalt. In glaciated mountainous valleys the soft eroded material may be glacial till with the protective capstones being large boulders in the till. Over time, cracks in the resistant layer allow the much softer rock beneath to be eroded and washed away. Hoodoos form where a small cap of the resistant layer remains, and protects a cone of the underlying softer layer from erosion. The heavy cap pressing downward gives the pedestal of the hoodoo its strength to resist erosion. With time, erosion of the soft layer causes the cap to be undercut. Eventually falling off, and the remaining cone is then quickly eroded.

Typically, hoodoos form from multiple weathering processes that continuously work together in eroding the edges of a rock formation known as a fin. For example, the primary weathering force at Bryce Canyon is frost wedging. The hoodoos at Bryce Canyon experience more than 200 freeze-thaw cycles each year. In the winter, melting snow, in the form of water, seeps into the cracks and then freezes at night. When water freezes it expands by almost 10%, prying open the cracks bit by bit, making them even wider, similar to the way a pothole forms in a paved road. 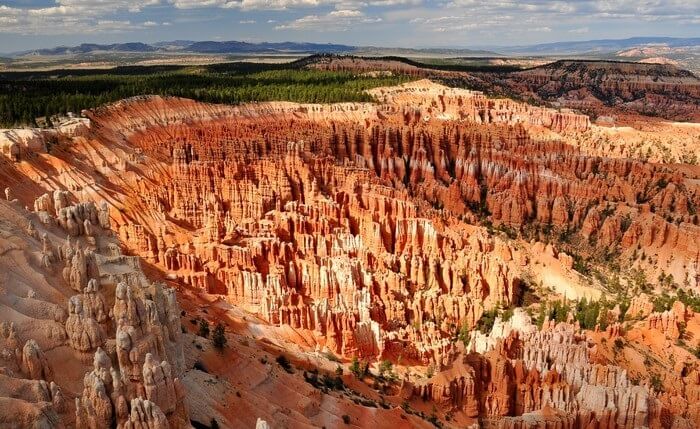 In addition to frost wedging, rain is another weathering process causing erosion. In most places today, rainwater is slightly acidic, which lets the weak carbonic acid slowly dissolve limestone grain by grain. It is this process that rounds the edges of hoodoos and gives them their lumpy and bulging profiles. Where internal mudstone and siltstone layers interrupt the limestone, one may expect the rock to be more resistant to the chemical weathering because of the comparative lack of limestone. Many of the more durable hoodoos are capped with a special kind of magnesium-rich limestone called dolomite. Dolomite, being fortified by the mineral magnesium, dissolves at a much slower rate, and consequently protects the weaker limestone underneath it. Rain is also the chief source of erosion (removing the debris). In the summer, monsoon-type rainstorms travel through the Bryce Canyon region bringing short-duration high-intensity rain.