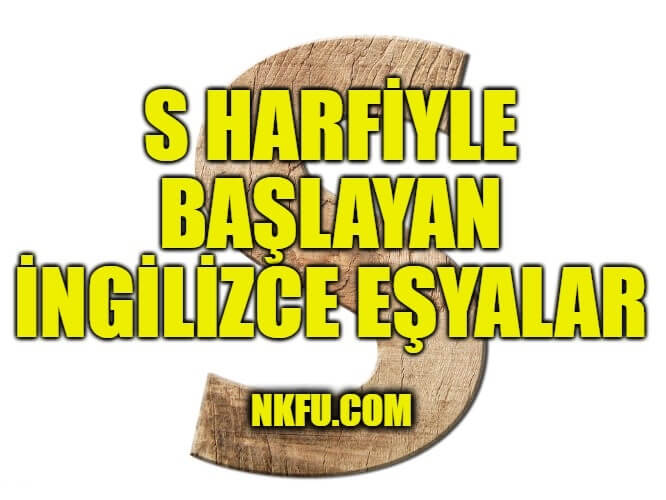 A bag or pouch inside a plant or animal that typically contains a fluid.
Türkçesi: Kese

a large bag of strong, coarsely woven material, as for grain, potatoes, or coal.
Türkçesi: Çuval

a seat for a rider on the back of a horse or other animal.
Türkçesi: eyer

a boat having sails as its principal means of propulsion.
Türkçesi: Yelkenli

a metal urn with a spigot and an internal tube for heating water in making tea
Türkçesi: semaver

The definition of a sandal is a type of shoe with straps that wrap around various parts of the foot and attach to a sole under the foot.
Türkçesi: sandalet

strong paper coated with a layer of sand or other abrasive, used for smoothing or polishing.
Türkçesi: zımpara

a tool or device for cutting, typically a thin blade of metal with a series of sharp teeth.
Türkçesi: testere

a musical wind instrument consisting of a conical, usually brass tube with keys or valves and a mouthpiece with one reed.
Türkçesi: saksofon

A device for weighing goods for sale.
Türkçesi: terazi

an object, usually a figure of a person in old clothes, set up to frighten crows or other birds away from crops.
Türkçesi: korkuluk

a long, broad strip of wool, silk, lace, or other material worn about the neck, shoulders, or head, for ornament or protection against cold, drafts, etc.; muffler.
Türkçesi: Atkı

a rod or wand borne in the hand as an emblem of regal or imperial power.
Türkçesi: asa

a cutting instrument for paper, cloth, etc., consisting of two blades, each having a ring-shaped handle, that are so pivoted together that their sharp edges work one against the other
Türkçesi: makas

a bracket for candles or other lights, placed on a wall, mirror, picture frame, etc.
Türkçesi: Aplik

a ladle or ladlelike utensil, especially a small, deep-sided shovel with a short, horizontal handle, for taking up flour, sugar, etc.
Türkçesi: Kepçe

a metal fastener having a tapered shank with a helical thread, and topped with a slotted head, driven into wood or the like by rotating, especially by means of a screwdriver.
Türkçesi: Vida

a hand tool for turning a screw, consisting of a handle attached to a long, narrow shank, usually of metal, which tapers and flattens out to a tip that fits into the slotted head of a screw.
Türkçesi: Tornavida

the art of carving, modeling, welding, or otherwise producing figurative or abstract works of art in three dimensions, as in relief, intaglio, or in the round.
Türkçesi: heykel

an agricultural implement consisting of a long, curving blade fastened at an angle to a handle, for cutting grass, grain, etc., by hand.
Türkçesi: tırpan

something designed to support a person in a sitting position, as a chair, bench, or pew; a place on or in which one sits.
Türkçesi: mühür

a belt or strap in an automobile, airplane, etc., fastened around or sometimes diagonally across the midsection to keep the person safely secured, as during a sudden stop.
Türkçesi: Emniyet kemeri

a recreation in which two children alternately ride up and down while seated at opposite ends of a plank balanced at the middle.
Türkçesi: Tahterevalli

loose, pajamalike trousers worn by both men and women in India and southeast Asia.
Türkçesi: Şalvar

a large rectangular piece of cotton, linen, or other material used as an article of bedding, commonly spread in pairs so that one is immediately above and the other immediately below the sleeper.
Türkçesi: Çarşaf

a thin slab of wood, metal, etc., fixed horizontally to a wall or in a frame, for supporting objects.
Türkçesi: Raf

a vessel, especially a large oceangoing one propelled by sails or engines.
Türkçesi: Gemi

a long- or short-sleeved garment for the upper part of the body, usually lightweight and having a collar and a front opening.
Türkçesi: gömlek

The definition of a shovel is a tool that has a long handle and a broad pan used to lift and move things.
Türkçesi: kürek

A waterproof curtain which hangs by the shower, to prevent water splashing from the shower.
Türkçesi: Duş perdesi

an implement for cutting grain, grass, etc., consisting of a curved, hooklike blade mounted in a short handle.
Türkçesi: Orak

The definition of a sink is a basin for water.
Türkçesi: lavabo

The definition of a skate is a shoe fitted with wheels for moving on a hard surface or a blade on the sole for gliding on ice.
Türkçesi: Paten

The definition of a skirt is a garment that hangs below the waist, or something like a skirt that hangs down.
Türkçesi: etek

A vehicle having runners and used for carrying people or loads over ice and snow
Türkçesi: kızak

a primitive instrument for throwing stones, etc., consisting of a piece of leather tied to cords that are whirled by hand for releasing the missile
Türkçesi: Sapan

any light, low-cut shoe into which the foot may be easily slipped, for casual wear in the home, for dancing, etc
Türkçesi: terlik

a high or low shoe, usually of fabric such as canvas, with a rubber or synthetic sole.
Türkçesi: spor ayakkabısı

a device for submarines, having air intake and exhaust tubes: it makes long periods of underwater operation possible
Türkçesi: Şnorkel

Soap is something that is used with water to make suds and is used for cleaning.
Türkçesi: sabun

A ball that is designed for use in the sport of soccer
Türkçesi: Futbol topu

a short stocking usually reaching to the calf or just above the ankle.
Türkçesi: çorap

a long, upholstered couch with a back and two arms or raised ends.
Türkçesi: Kanepe

a long, stabbing weapon for thrusting or throwing, consisting of a wooden shaft to which a sharp-pointed head, as of iron or steel, is attached.
Türkçesi: mızrak

A device consisting of a dial and an arrow that is spun to indicate the next move in some board games.
Türkçesi: Topaç

a device formerly used for spinning wool, flax, etc., into yarn or thread, consisting essentially of a single spindle driven by a large wheel operated by hand or foot.
Türkçesi: çıkrık

a utensil for use in eating, stirring, measuring, ladling, etc., consisting of a small, shallow bowl with a handle.
Türkçesi: kaşık

an official seal or device appearing on a business or legal document to show that a tax has been paid.
Türkçesi: Pul

a device, pot, or container in which something is steamed.
Türkçesi: Vapur

an instrument used in auscultation to convey sounds in the chest or other parts of the body to the ear of the examiner.
Türkçesi: stetoskop

a vessel for boiling or stewing.
Türkçesi: Güveç

a long piece of wood for use as fuel, in carpentry, etc.
Türkçesi: Baston

a single seat on legs or a pedestal and without arms or a back.
Türkçesi: Tabure

a filter, sieve, or the like for straining liquids.
Türkçesi: süzgeç

a kind of litter, often of canvas stretched on a frame, for carrying the sick, wounded, or dead.
Türkçesi: Sedye

any of several devices for sharpening razors, especially a strip of leather or other flexible material.
Türkçesi: kayış

a small bowl, usually having a cover, for serving granulated sugar or sugar cubes.
Türkçesi: Şekerlik

a set of men’s garments of the same color and fabric, consisting of trousers, a jacket, and sometimes a vest.
Türkçesi: takım elbise

eyeglasses with colored or tinted lenses that protect the eyes from the glare of sunlight.
Türkçesi: güneş gözlüğü

an outer coat or other outer garment.
Türkçesi: cüppe

a long, narrow board on which a person stands or lies prone in surfboarding.
Türkçesi: Sörf tahtası

A mask worn to catch bacteria shed in liquid droplets and aerosols from the wearer’s mouth and nose.
Türkçesi: cerrahi maske

adjustable straps or bands worn over the shoulders with the ends buttoned or clipped to the waistband of a pair of trousers or a skirt to support it.
Türkçesi: Jartiyer

a knitted jacket or jersey, in pullover or cardigan style, with or without sleeves.
Türkçesi: kazak

a seat suspended from above by means of a loop of rope or between ropes or rods, on which one may sit and swing to and fro for recreation.
Türkçesi: Salıncak

a weapon having various forms but consisting typically of a long, straight or slightly curved blade, sharp-edged on one or both sides, with one end pointed and the other fixed in a hilt or handle.
Türkçesi: kılıç

a small device consisting of a glass, metal, or hard rubber tube, narrowed at its outlet, and fitted with either a piston or a rubber bulb for drawing in a quantity of fluid or for ejecting fluid in a stream, for cleaning wounds, injecting fluids into the body, etc.
Türkçesi: şırınga