Definitions: vertical lines are files; horizontal lines are ranks; lines at 45° are diagonals. Each piece has its own way of moving around the board. The X marks the squares where the piece can move.

*The knight is the only piece that can jump over another piece.
*No piece may move to a square occupied by a piece of the same color.
*All pieces capture the same way they move, except pawns.
*The king’s move is one square in any direction. The king (K for short) may not move to any square where it is threatened by an opposing piece. However, the king can move to a square that is occupied by an opponent’s piece and capture the piece, taking it off the board.
*The queen (Q) can move any distance in any direction on the ranks, files and diagonals.
*The rooks (R) move any distance on the ranks or files.
*The bishops (B) move diagonally on the board. Since a bishop can only move diagonally, it will always be on the same color square.
*The knights (Kt or N) move in an “L” shape. Each move must be either two squares along a rank and one square along a file, or two squares along a file and one square along a rank. It is the only piece that can jump over other pieces. Like the other pieces, it captures an opposing piece by landing on its square.
*The pawns can only move up the board. On its first move a pawn may move either one or two squares forward. A pawn captures one square diagonally, not as it moves: see white circles on its diagram. 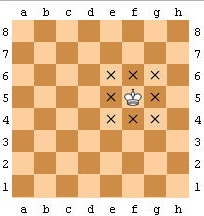 Moves of the King 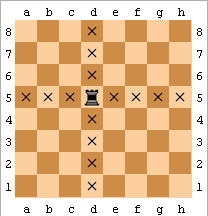 Moves of the Rook 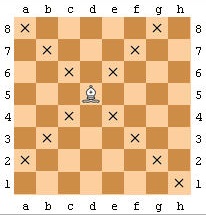 Moves of the Bishop 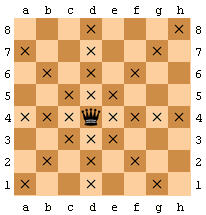 Moves of the Queen 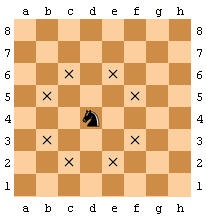 Moves of the Knight 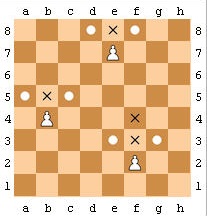 Moves of the Pawn

Once the pieces have been placed in their starting positions, the player who has the white pieces makes the first move. After the white player makes their move, the black player makes a move. The two players take turns making a move until the game ends.

To make a move, a player chooses one of their pieces on the board, and moves it from its current square to another square. The square it moves to must either be empty, or contain a piece belonging to their opponent.
If the square contains an opponent’s piece, then that piece is removed from the board and placed off to the side. This type of move is called ‘capturing’.

When you Attack the King

When you make a move that puts your opponent’s King in danger of being captured, you tell your opponent you’re attacking their King by saying “Check.”

Your opponent must then make a move that protects their King. If they can’t make such a move, then you win the game.

The Black King is being attacked by the White Queen. Another way of protecting your King is to move a piece that blocks the piece that is attacking your King. Here, Black moves his Knight to block White’s Queen from attacking his King.

The King Must be Kept Safe!

When you make a move, you can never make a move that will let your opponent capture your King.