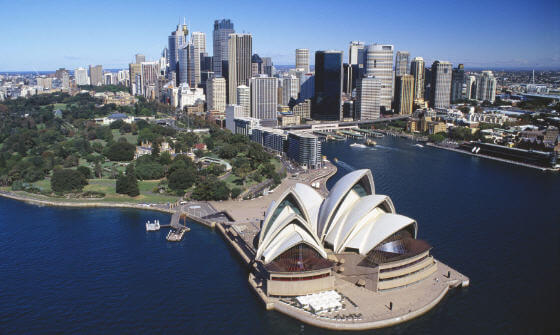 Sydney, the capital of New South Wales, Australia. It is Australia’s oldest and largest city with a population of around 4 million. Sydney is built around a huge harbour and hosts many tourist attractions as well as a number of beaches, bays and a couple of national parks.

Sydney was first visited by the British in 1770 when Captain James Cook and Joseph Banks sailed the Endeavor into Botany Bay. The First Fleet arrived at Botany Bay in 1788 under the command of Governor Arthur Phillip.

View from Sydney TowerSydney has many influences upon its style. Aboriginal sites and engravings can still be seen from the original occupiers, the Eora tribe. The city also has an anglo-mediterranean style and a growing Chinese and Asian influence.

The city is divided into North and South by the Sydney Harbour, with both Sydney Harbour Bridge and Tunnel connecting them. Most of the tourist attractions are in the South part of the city, with a large business and residential area in the North.

The Rocks, SydneyThe South part of the city consists of The Rocks and Circular Quay to the North, with the Central Station marking the South. Darling Harbour marks the West and there are a number of parks to the East.

On the corner of Market and Elizabeth Streets you will find the country’s most prestigious department store – David Jones. While visiting this awesome store be sure to stop at their equally renown ‘Food Glorious Food’ Department. You can choose from one of their many gourmet delights. Then stroll over to the beautiful Hyde Park for a picnic.

A shopper’s dream, Sydney’s Central Business District is home to some of the best shopping centres in the city. There is something for everyone with over 400 specialty stores in just 8 retail centres. Pitt Street Mall is where you will find the popular re-branded Myer Store.

Don’t miss the chance to shop in the famous Queen Victoria building. This stunning shopping centre occupies an entire city block. Initially completed in 1989, the Queen Victoria was restored during the 1970’s. It is now home to a huge array of boutiques and designer stores.

Opposite the Queen Victoria building is the historic Sydney Town Hall, built in the 1880’s. While in the city travel to the top of Sydney Tower, the tallest structure in Australia, and see amazing 360° views of Sydney.

Sydney offers a whole range of great tourist attractions from the world famous Sydney Opera House and Sydney Harbour Bridge to the sandy shores of Bondi Beach. A great way to get to see as much of Sydney as possible is to take part in one of the many Sydney Tours.