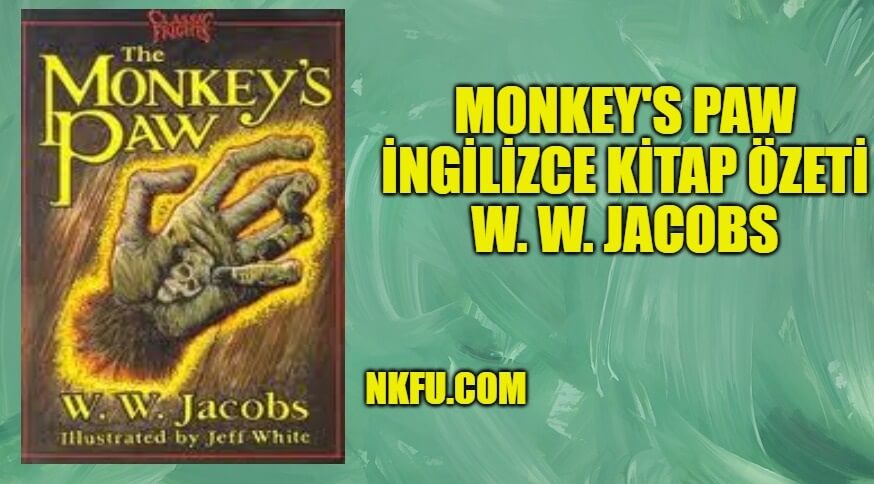 The Monkey’s Paw is a story about a mystical charm, a monkey’s paw that is brought into the home of the White family by Sergeant Major Morris, who has served in India. The monkey’s paw has the ability to grant 3 wishes to 3 people. S.M. Morris was the 2nd owner, the 1st owner’s 3rd wish was for death.

S.M. Morris expresses grief over the monkey’s paw and tries to destroy it, Mr. White saves it and takes it off his hands for a small fee. His first wish is for 200 pounds, when nothing happens immediately, he and his family, wife and son Herbert, think that the monkey’s paw is a hoax.

The Whites’ get the money from Herbert’s factory after he is accidentally pulled into a machine and mangled to death. The 2nd wish is thought of by Mrs. White, to bring her son back from the grave. He has been dead for 10 days, again after the wish, nothing happens immediately. The Whites’ then begin to hear the sound of someone or something arriving at their door and a loud knocking begins. Mrs. White wants to rush to the door. Mr. White is not so sure.

As Mrs. White rushes to the door to open it, it is bolted at the top, she can’t reach the lock, as she is dragging a chair to the door, Mr. White is furiously looking for the monkey’s paw to make his 3rd wish.

Mr. White makes his 3rd wish, to return whatever is at the door, Herbert or some form, thereof, back to the grave, just as Mrs. White opens the door, to find nothing but the dark empty night.

The son of Mr. and Mrs. White. Herbert is an irreverent, affectionate, and loyal young man and the only surviving child of the Whites. He works in an unidentified capacity with heavy machinery at a company called Maws and Meggins. It is possible, although not certain, that Mr. White’s second wish reanimates Herbert as a terrifying corpse.

Herbert’s mother and Mr. White’s wife. Mrs. White is an intelligent and passionate woman. She shares her husband’s and son’s fascination with Sergeant-Major Morris’s stories and questions him just as eagerly as they do. She is lovingly attentive to her husband and son, although she also enjoys teasing them. Herbert’s death traumatizes Mrs. White, and she forces Mr. White to wish Herbert back to life.

Herbert’s father and Mrs. White’s husband. Mr. White is an old man who is both curious and malleable. A poor man, he thinks longingly about the exotic lands he has never visited. The monkey’s paw fascinates him in part because of its connection to those lands. Although it is Mr. White who makes all three wishes, he makes the first two only at the suggestions of his wife and son.

A friend of the Whites. A mysterious and possibly sinister figure, Sergeant-Major Morris enjoys talking about his adventures abroad and shows the Whites his monkey’s paw, in spite of his professed reservations. A jaded and world-weary man, he discourages Mr. White from dreaming of India, suggesting that life is better and simpler at home in England. He throws the monkey’s paw into the fire and urges Mr. White not to make any wishes, but he ultimately tells him exactly how to make a wish.

The man who informs Mr. and Mrs. White of Herbert’s death. The nervous representative sympathizes with the Whites and tries to distance himself from Maw and Meggins’s failure to take responsibility, stressing that he is following orders and not expressing his own feelings. He gives Mr. and Mrs. White two hundred pounds from the company.