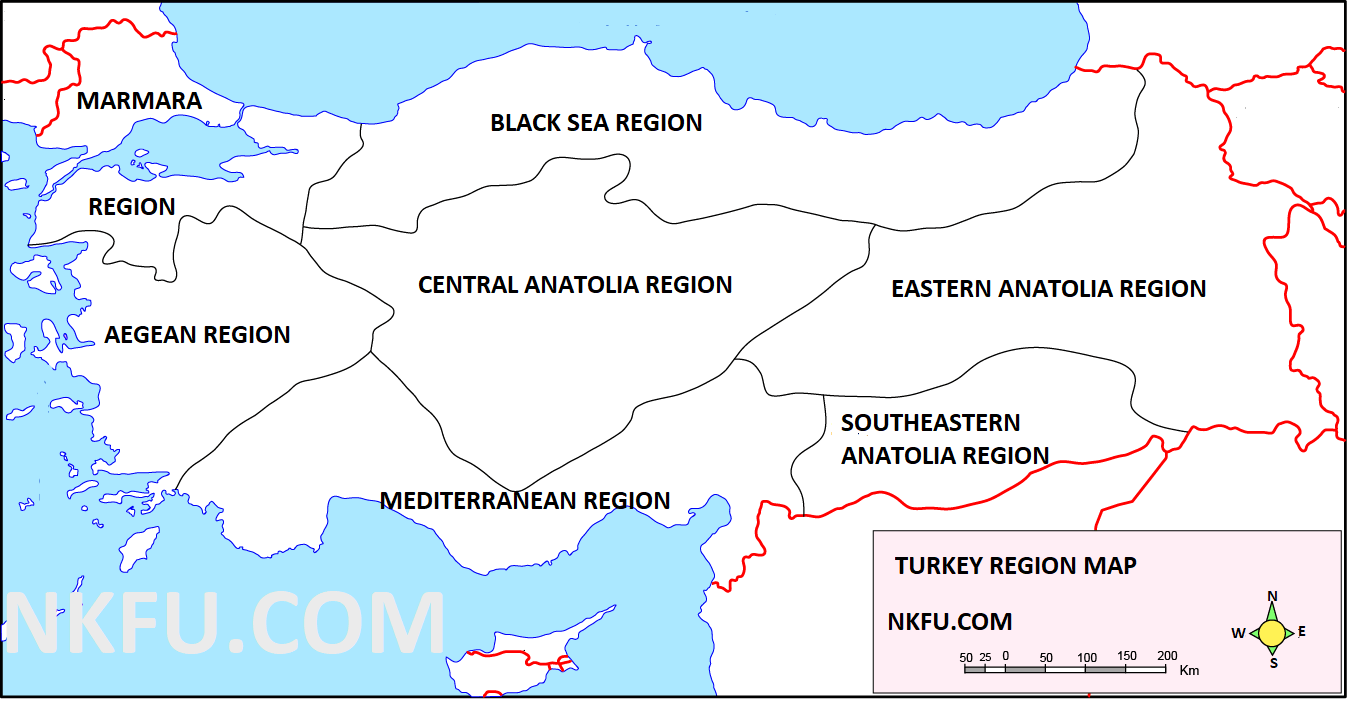 The Eastern Anatolian is a rugged country with higher elevations, a more severe climate, and greater precipitation. Mount Ararat, the tallest point in Turkey, is located in this region. This region is the largest region of Turkey, occupying 21% of the total area of the country. Eastern Anatolian covers 66,023 square miles of land. From the Turkey’s Siberia, or highlands in the north, to the mountain ranges, vast lands of this region only consist of wild or barren wasteland. At the foot of this region lays fertile land because of the rivers that run through. The winters are very harsh with lots of snow which causes road blocked to small villages for several months. There is not a lot of population here in this region because of the harsh climate and high mountains. Agriculture is very limited here. There are cities that are located in this region. They are Erzurum, Kars, Agri, Van, Elazig, Erzincan, Malatya, Tunceli, Bingol, Mus, Hakkari, Igdir, Ardahan, and Bitlis.

The Central Anatolia region is also called the Anatolian Plateau. This region is actually quite diverse. This region occupies about 19% of the total area of Turkey with 62,548 square miles of land. Next to the Eastern Anatolian, it is the second largest region of Turkey. The heartland of the country is the plateau like highlands of Anatolia. The Tuz Golu and the Konya Ovasi are the two largest basins on the plateau. In the northwest and northeast, the areas are wooded. Central Anatolia is mostly used for grazing. Stock raising is important in this region. Rainfall is limited to less than 25 centimeters annually in Ankara, Turkey’s capital. This region also recieves heavy snow and hot days. There are 13 cities that are located in Central Anatolia. They are Ankara, Konya, Nevsehir, Kayseri, Yozgat, Aksary, Kirikkale, Kisehir, Nigde, Sivas, Eskisehir, Cankiri, and Karaman. 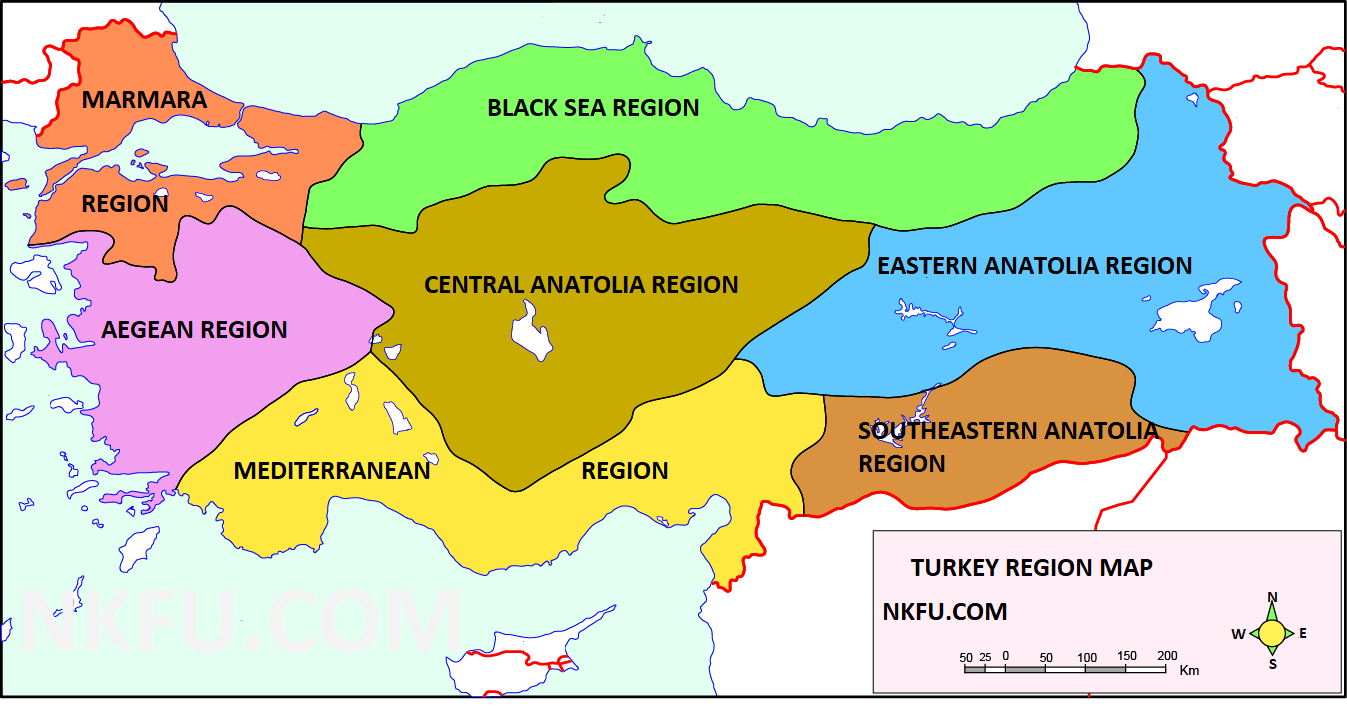 Northern Anatolian region is along the Black Sea. It occupies about 18% of the total area with 56,439 square miles. This region has a steep and rocky coast and rivers. The climate in this region are mild and damp. The climate is good for growing in plants because of the dampness, causing it to have over 7.000 species of plants. Fishing, coal, nuts and tea are the major sources. This region is heavy in industry. There are 18 cities located in this region. They are Trabzon, Samsun, Zonguldak, Artvin, Rize, Gumushane, Bayburt, Giresun, Ordu, Amasya, Sinop, Kastamonu, Bartin, Bolu, Duzce, Tokat, Karabuk, and Corum. 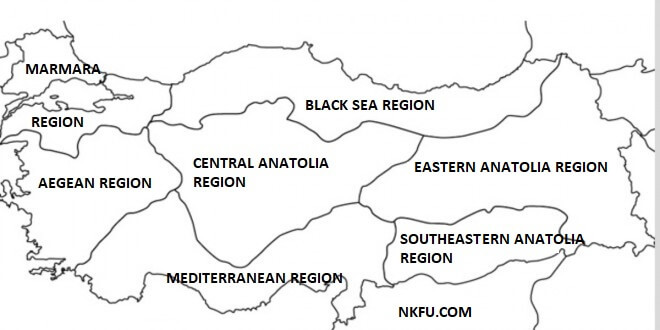 The Aegean region is among the prettiest landscapes in the country. The magnificent coastline that are lapped by the clear water of the Aegean Sea is a beautiful sight! Many tourists come to see this area to see the sea. The climate is fairly mild. It has hot summers, sunny autumns, and warm winters with occasional showers. The Aegean region occupies about 11% of the total area with 32,818 square miles. Most of the villigers live by the coastline because of easy transportation. This part of the region is also rich in industry. There are 8 cities that are located in this region. They are Izmir, Aydin, Manisa, Kutahya, Usak, Mugla, Denizli, and Afyon.

The Marmara region occupies 8.5% of the total area of Turkey with 25,984 square miles. This area is the junction that between Europe and Asia. The region possesses beautiful shores along the Marmara Sea. There are also pretty islands that lie in the Sea. The Marmara Region gets a lot of rainfall. A lot of produce is grown here. About 73% of sunflower and 30% of corn is produced here in the Marmara region. Because the region is in Europe and Asia, this place is an important transportation, tourism, industry, and commerce place. There are 11 cities located in this part of the region. They are Istanbul, Bursa, Edirne, Kocaeli, Balikesir, Kirklareli, Tekirdag, Canakkale, Bilecik, Sakarya, and Yalova.

This region is the smallest region of Turkey. It represents only 9.7% of the total area with 23,552 square miles. This region possesses the natural and historical beauties. The central part of this region is made of mountainous areas. This is the only area that produces oil. Throughout this region, a special atmosphere exists. There are 9 cities that are located in the Southeastern Anatolia. They are Sanliurga, Mardin, Diyarbakir, Adiyaman, Gaziantep, Kiirt, Sirnak, Batman, and Kilis.