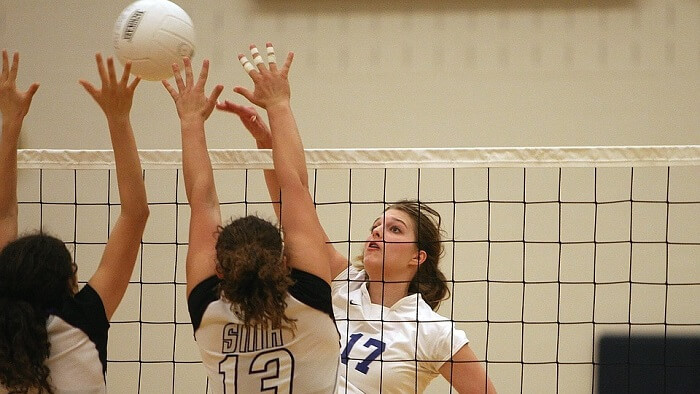 Two teams of six players go head-to-head on a court separated down the center with a net. Each team lines up on the opposing sides of the net with the objective of sending the volleyball over the net, but within the court boundary lines. Any part of the body above the waist can be used to hit the ball. The goal is to clear the net with a serve and stop the opposing side from returning the volleyball before it hits the ground. The winning team must earn 25 points and be at least two points ahead of the opposing team.

One player on either team will put the ball into play by a serve. The first serve of a match is determined by a volley. The server must serve the ball from behind the end line using an underhand or overhand serve. When the receiving team returns the volleyball successfully, it wins a point and the right to serve by rotating players by one position in a clockwise manner. Each team has three opportunities to hit and return the ball but no single player can hit the ball twice in a row.

Many volleyball matches are divided into sets. Depending on the number of sets agreed upon within the match, one team must win the designated amount of sets to win the match. For example, in a best-of-five match, the first team to win three sets wins the match. Rally scoring is used in volleyball. This scoring method is where a point is scored on every rally and can be won by the serving or receiving team.

Players can lose points if they commit a violation. Players cannot touch the net during the game. Players can never reach under the net or interfere with another player or the ball. Failure to hit the ball correctly, such as with a throw or a carry, is an illegal move. The volleyball must be served in a rotation with one player moving to the front line while another player moves to the back line to give each player an opportunity to play each spot on the court.