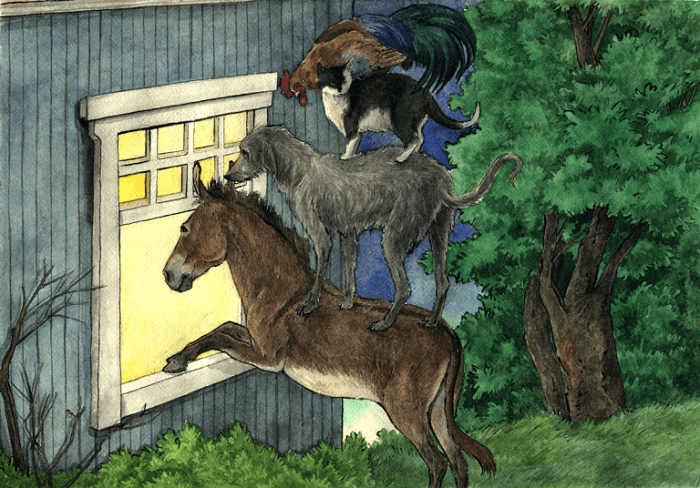 Bremen Mızıkacıları (Town Musicians of Bremen); In the story a donkey, a dog, a cat, and a rooster, all past their prime years in life and usefulness on their respective farms, were soon to be discarded or mistreated by their masters. One by one they leave their homes and set out together. They decide to go to Bremen, known for its freedom, to live without owners and become musicians there. (“Something better than death we can find anywhere.”)

On the way to Bremen, they see a lighted cottage; they look inside and see four robbers enjoying their ill-gotten gains. Standing on each other’s backs, they decide to perform for the men in hope of gaining food. Their ‘music’ has an unanticipated effect; the men run for their lives, not knowing what the strange sound is. The animals take possession of the house, eat a good meal, and settle in for the evening. 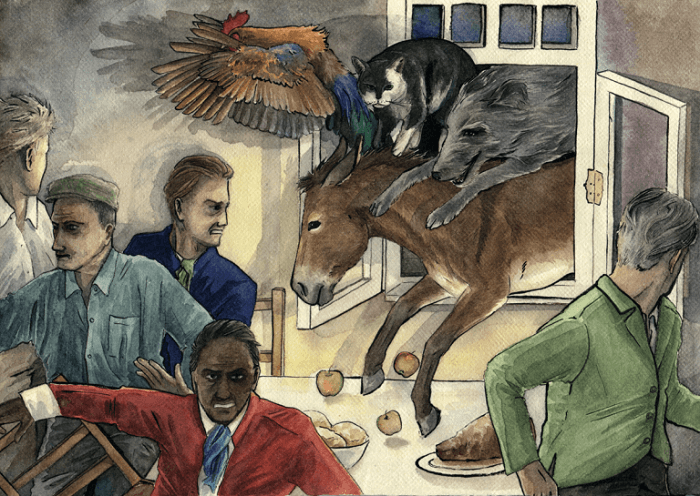 Later that night, the robbers return and send one of their members in to investigate.

Later that night, the robbers return and send one of their members in to investigate. He sees the Cat’s eyes shining in the darkness and the robber thinks he is seeing the coals of the fire. He reaches over to light his candle. Things happen in quick succession; the Cat scratches his face with her claws, the Dog bites him on the leg, the Donkey kicks him with his hooves, and the Rooster crows and chases him out the door, screaming.

He tells his companions that he was beset by a horrible witch who scratched him with her long fingernails (the Cat), an ogre with a knife (the Dog), a giant who had hit him with his club (the Donkey), and worst of all, the judge who screamed in his voice from the rooftop (the Rooster). The robbers abandon the cottage to the strange creatures who have taken it, where the animals live happily for the rest of their days.

An alternate version involves the animals’ master(s) being deprived of his livelihood (because the thieves stole his money and/or destroyed his farm or mill) and having to send his animals away, unable to take care of them any further. After the animals dispatch the thieves, they take the ill-gotten gains back to their master so he can rebuild. Other versions involve at least one wild, non-livestock animal, such as a lizard, helping the domestic animals out in dispatching the thieves.