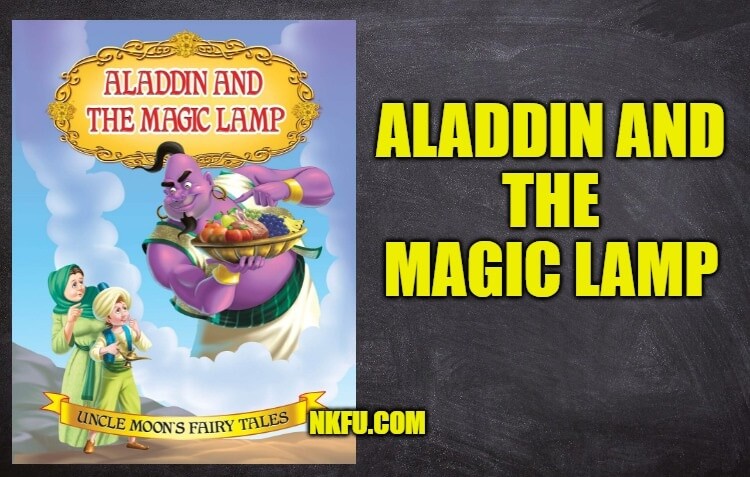 Aladdin and the Magic Lamp

Alaaddin’in Sihirli Lambası; Aladdin was the son of Mustapha, a poor tailor. He was a lazy boy and played all day long. After his father died, his mother earned money by spinning cotton.

One day, a wicked magician met Aladdin in the marketplace. He said, “You must be the son of my brother Mustapha. Take there gold coins for your mother and tell her I will visit her tomorrow.”

Aladdin’s mother was puzzled when she heard this. She knew that Aladdin had no uncle. The magician came the next day. “I left home long ago after a fight with my brother,” he said. “To show how sorry I am, I want to set Aladdin up in a shop and make his fortune.”

The magician bought Aladdin fine clothes and gifts. He also put a ring on his finger. He then took Aladdin past the city gates till they came to a lonely place. They stopped near a huge stone and the magician uttered some magic words. The stone rolled aside and a hole appeared in the ground.

Aladdin hen climbed up the steps. The magician asked for the lamp. “Help me out first,” said Aladdin. This made the magician very angry. He uttered some magic words and the stone rolled back into place. Aladdin was trapped.

The poor boy was so afraid that he joined his hands in the prayer. As he did so, he happened to rub the ring that the magician had put on his finger. A huge genie appeared before him.

“What is your command, Master?” he said.

“Get me out of here!” said Aladdin. In a trice, he was out in the open again. Aladdin ran home with the lamp and all the treasure that he had collected. His mother listened eagerly as Aladdin told her about his adventure.

The next day, when his mother was cleaning the lamp in the courtyard, the same genie who had appeared to Aladdin stood before her. “What is your command?” he said. “Bring us fine food,” said Aladdin. At once the genie laid delicious food before them.

Now Aladdin and his mother began living on comfort. One day Aladdin saw the sultan’s daughter. He wanted to marry her. So he sent his mother some jewels to the sultan to ask for her hand in marriage. The sultan was delighted. He said, “Tell Aladdin to send me forty gold basins filled with jewels. He can then marry my daughter.”

Aladdin rubbed the magic lamp once again. Soon forty slaves appeared, carrying basins of jewels. Aladdin’s mother led them to the palace. The sultan was overjoyed. “I shall be delighted to have Aladdin marry my daughter,” he said. Aladdin ordered the genie to build a fine palace for the princess. The marriage took place with great pomp and show in that fine palace.

Meanwhile, the magician learnt about Aladdin’s good fortune. He knew it was because of the magic lamp. He decided to get that lamp. So he disguised himself as a lamp seller and stood outside Aladdin’s palace, crying, “New lamps for old!”

The princess heard this and told her maid to exchange Aladdin’s old lamp for a new one. Once the magician got hold of the magic lamp, he rubbed it and the genie appeared. “Take this palace and the princess to my country,” he ordered. The genie did as he was told.

When Aladdin discovered what had happened, he did not know what to do. He joined his hand in prayer. In doing so, he rubbed the ring. The genie appeared. Aladdin told him to bring back his princess.

Soon the palace and the princess appeared before him. Aladdin set the genie free, and he and his wife lived happily ever after.