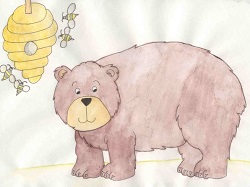 Bruce was a big bear that lived in the Highlands of Scotland. He was covered with dark brown hair, had four large paws, a wet nose on the end of his snout, and hazelnut colored eyes. Bruce spent most of his time in his cave, coming out only when he was hungry. He was a rather lazy bear. He’d rather sleep than do anything else.

One morning as he was curled up in a ball, trying to nap, he heard the rain pouring down outside. The rain coming down reminded him that he was hungry so he stood up, stretched, and walked to the entrance to the cave. He looked at the rain. It was plopping and splashing in puddles on the ground, making a muddy mess. He walked out and soon his hair was dripping wet. He started shivering.

Bruce headed for the pine forest. The trees were so tall and there were so many of them that not too much rain reached him. He pushed his way past the low-hanging branches, the soft pine needles brushing against his thick fur. He looked around on the ground, searching for something to eat. He would be happy if he could find some nuts or berries to nibble.

Up ahead he saw something hanging from a tree. He moved. It was a beehive. Dozens of bees were flying around it. Bruce could hear their buzzing sounds as their wings flapped quickly up and down. “Honey,” he said, smiling. “I love honey.”

He stood underneath the beehive trying to figure out how to get the honey without being stung. He knew that the bees gathered nectar and pollen from heather flowers; tiny little purple bells that were fragrant and swayed in the breeze. He loved heather honey.

He picked up a big stick and started hitting the beehive with it. The bees started flying around, confused and angry. When they saw Bruce swinging the stick, they gathered in a swarm and headed for him. Bruce saw the bees coming towards him and knew they were out to sting him. He dropped the stick and started running through the pines. Now and then he turned to look back at the bees, which were getting closer and closer to him.

He thought of climbing a tree, but bees can fly and would be able to reach him, so he didn’t do that. As he ran past some fallen tree trunks that were hollowed out, he thought of climbing inside and hiding, but he knew the bees would find him. He didn’t want to be stung.

Bruce didn’t know what to do. Where could he hide from the bees? He saw a loch in the distance. It was deep and the water looked dark and black. He ran as fast as he could and jumped. He landed with a big SPLASH in the water. Brrrrrr, it was freezing cold. He let himself float up to the surface and saw the bees coming right towards him. He ducked back under water after taking a deep breath. He knew he couldn’t hold it for very long and then he’d have to take another breath. The bees would be waiting for him.

Bruce started swimming another direction. He stopped when he got to the shore and stuck just the top of his head out of the water. The bees were still circling around the place where he had gone under. He crawled out and snuck into the forest. Knowing the bees were nowhere around, he went back to their beehive, knocked it down with the big stick and carried it back to his cave.

All afternoon and evening Bruce feasted on heather honey. It was delicious and tasted just like heather. He was feeling quite smart because he’d outwitted the bees. He knew that next time, he’d have to come up with a new way to get the honey, but this time he just sat back and enjoyed it.