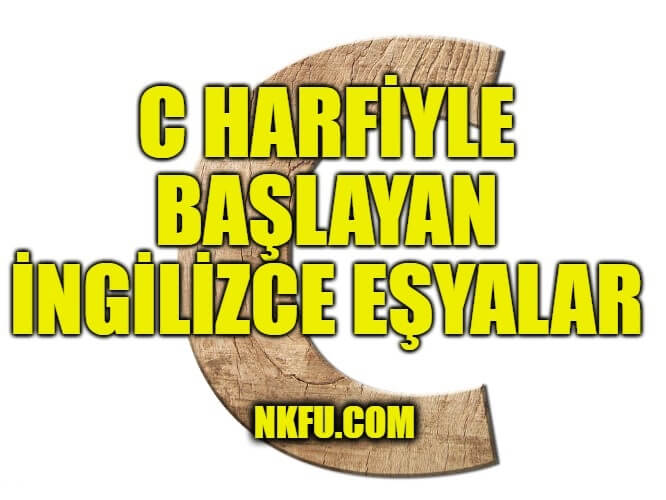 a cupboard used for holding or storing things, or a group of advisors.
Türkçesi: Dolap

a box or enclosed structure made of wires, bars, etc., for confining birds or animals
Türkçesi: kafes

An apparatus or container for measuring the heat generated by a chemical reaction, change of state, or formation of a solution.
Türkçesi: Kalorimetre

an electronic device that captures pictures, movies or other visual images either digitally or on film.
Türkçesi: kamera, Fotoğraf makinesi

The definition of a candle is a mass of wax with a wick in the middle for burning.
Türkçesi: mum

a holder for a candle; candlestick.
Türkçesi: Mumluk

a holder for a candle
Türkçesi: Şamdan

A light, slender, usually open boat that has pointed ends and is propelled by paddles.
Türkçesi: kano

a surface you paint on that is often made from tightly stretched unbleached cloth or a closely woven fabric that is often used to make boat sail, purses and upholstery.
Türkçesi: Tuval

a piece of clothing without any sleeves that’s worn over the shoulders and attaches at the front of the neck.
Türkçesi: pelerin

a car is an automobile or the part of an elevator, train, etc. that carries people or freight.
Türkçesi: araba

Card is defined as a flat, stiff thick piece of paper, often used to express a greeting, play a game or prove identification, or a wire brush or machine used to raise nap on a cloth.
Türkçesi: kart

a thick, heavy fabric of wool, cotton, or synthetic fibers for covering a floor, stairs, etc.: it is woven, usually with a pile, or felted
Türkçesi: halı

A cylindrical, usually metal casing containing the primer and charge of ammunition for firearms.
Türkçesi: Fişek

a large fortified building or set of buildings where royalty lives, or a large and impressive house.
Türkçesi: kale

a series of objects, people or events which are connected to one another, or a flexible series of metal links.
Türkçesi: Zincir

A chair is defined as a piece of furniture for one person to sit on.
Türkçesi: sandalye

A game board marked with 64 squares, used in playing chess.
Türkçesi: satranç tahtası

a chisel is a hand tool with a wedge shaped blade that is driven with a mallet or hammer.
Türkçesi: Keski

a pair of small sticks of wood, ivory, plastic, etc., held together in one hand and used in Asian cuisine as eating and cooking utensils
Türkçesi: Çin yemek çubukları

a trumpet with a clear high pitched tone.
Türkçesi: Zurna

a clip is something that fastens or holds together, or the act of cutting.
Türkçesi: klips

a long loose fitting piece of clothing worn over other clothes, sometimes with a hood and loose fitting arm holes.
Türkçesi: pelerin

a device for measuring and showing the time of day, or a decoration on the side of a sock or stocking coming up from the ankle.
Türkçesi: saat

The definition of cloth is something made of fibrous material.
Türkçesi: Bez

clothes are garments worn on the body for protection or adornment.
Türkçesi: giysi

a small tray, mat, or disk placed under a glass or bottle to protect a table or other surface
Türkçesi: bardak altlığı

a coat is a layer of something on a surface, or the fur covering an animal, or an outer layer of clothing.
Türkçesi: ceket

An oblong box in which a corpse is buried.
Türkçesi: Tabut

The definition of a colander is a large bowl with holes for draining liquid.
Türkçesi: Kevgir

a compass is a tool with two pointed legs connected by a hinge, one end with a writing device the other used as a stable pivot, used for drawing perfect circles and other things.
Türkçesi: Pergel

Small pieces or streamers of colored paper that are scattered around during the course of festive occasions
Türkçesi: konfeti

The definition of a console is a storage compartment or cabinet.
Türkçesi: Konsol

an apparatus or utensil for cooking
Türkçesi: Tencere

A machine that makes copies of printed or graphic matter.
Türkçesi: Fotokopi makinesi

The definition of a cord is string or rope that ties or a measurement of cut firewood.
Türkçesi: kordon

a horizontal molding projecting along the top of a wall, building, etc.
Türkçesi: Korniş

thread or cloth made of cotton
Türkçesi: pamuk

The definition of a couch is a large piece of furniture for sitting or laying down.
Türkçesi: kanepe

a cover is something that goes over, rests on the surface or provides a place to hide.
Türkçesi: Örtü

A hat having a tall usually creased crown and a very wide brim, often made of felt or straw and characteristically worn by cowboys
Türkçesi: kovboy Şapka

a cradle is a small, low bed for a baby, or the earliest period of life.
Türkçesi: beşik

A machine or device for separating cream from milk.
Türkçesi: Sütlük

One that crisps, especially a compartment in a refrigerator used for storing vegetables and keeping them fresh.
Türkçesi: Sebzelik

Crown is defined as royalty, or a circular headdress worn by royalty, or an award, or the highest part of something.
Türkçesi: taç

a small, open container for beverages, usually bowl-shaped and with a handle
Türkçesi: fincan

curtain is any sort of covering, especially a piece of cloth that covers a window or opening.
Türkçesi: perde

a cushion is something padded that adds comfort, support or lessens impact.
Türkçesi: Minder