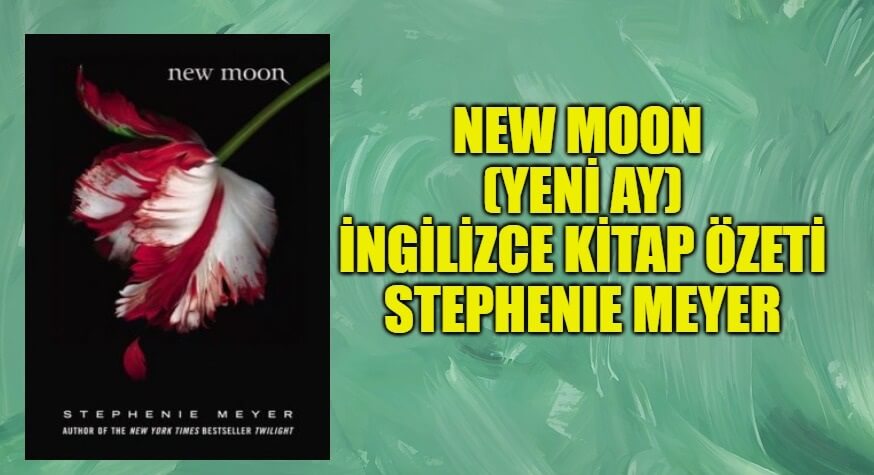 Edward Cullen and Alice throw Bella an 18th birthday party. Edward is the vampire she’s deeply in love with. In attendance are the entire Cullen family, Alice, Carlisle, Emmet, Rosalie, Esme and Jasper. Bella accidentally cuts her hand with a piece of paper, this leads to a tense and somewhat violent moment. Jasper cannot control himself at the sight of her human blood and pounces upon her with the intention to feed. Edward has to protect her, an action that forces him to recognize the fact keeping Bella near his family puts her in danger. As they clean her wounds a pivotal point in the plot occurs.

As they speak, Carlisle tells of Edwards belief that Vampires lack a soul and that there is no better place than hell for them if they are killed. He speaks further, telling Bella of Edwards inner struggle, the fact that he doesn’t want to risk turning Bella into one of the damned. Edward becomes emotionally retracted as the story continues, until later his family leave Forks in an effort to reduce the risk of harm to Bella and ensure her safety. He unwittingly upsets Bella by taking the items she hold dear with him. Photographs and pictures that can be used to prove he is alive.

Four long months pass, a time in which Bella enters a zombie like state.

Four long months pass, a time in which Bella enters a zombie like state. She exists but really isn’t living like she once was. Charlie is worried and tells her to wake up. To help her get through this difficult time she goes to see a movie with her friend Jessica. Upon the completion of the film she notices some guys with a striking resemblance to the stalkers who followed her the year before. She hears Edward in her head fears for her sanity. She actually believes it’s her mind giving a wish of fulfillment. Feeling these delusions are her subconscious mind she seeks out alternative methods to trigger them.

Jacob Black, her long lost friend who suffered grievous injures in Twilight makes another appearance in New Moon. Bella stumbles upon a pair of motorbikes by the road side and realizes they’re the perfect method to hear Edwards voice once again. She notices they need works and remembers Jacob unusual tendency to fix things. She takes them to see him on the back of her truck and pledge one to him should he get them running once more. Soon they become close and she begins to depend on him, he fills the void in her heart. Jacob on the other hand is romantically attracted to Bella, who is aware of this, she tells him they are simply good friends.

As their friendship develops, Jacob begins to trust Bella

As their friendship develops, Jacob begins to trust Bella and tells of the growing unrest and occurrences at La Push – a reservation. Jacob tells her of his fear of the leader of a group of guys by the name of Sam Uley. A close friend of his had the same feelings he was missing for a few days and upon his return had somehow joined the gang. Jacob elaborate by telling of their strange behavior and his belief they’re up to no good. He worries he too could go missing and be targeted.

On an outing, Jacob feels ill and develops a strong fever. Shortly after Bella has difficulty getting in touch with him before she finds out he too has returned from his absence as a member of Sam’s gang. She goes to visit him at his house and is told that he must stay well away from her. He doesn’t explain the reason for this when she asks. After the fight and argument Jacob is feeling down and very regretful. He creeps into her room in the middle of the night and tells her what is happening. The only hint he gives her is to remember the legends he informed her of when first they met.

Bella thinks back and remembers a story about Werewolves and Vampires.

Bella thinks back and remembers a story about Werewolves and Vampires. She soon realizes that Jacob and his new gang of friends are werewolves. This doesn’t sit well with Bella; there is animosity between Edward and Jacob because deep down they both love Bella. Plus they are enemies because of the natures of the kind. There is real cause for concern because of the rivalry between these two and the fact vampires and werewolves truly hate one another.

The return of Victoria further complicates the situation. She wants vengeance for the death of her friend James the vampire tracker. He was slain by Jasper and Emmet following his attempt to kill Bella. As opposed to killing Edward, she feels killing his girlfriend is a fair trade. Therefore, it is down to Jacob to protect her. Jacob and his new found pack encourage Bella and her father to spend time with them at La Push where they can provide adequate protection.

Bella begins to spend a lot of time on the beach. She longs to hear Edwards voice again and misses him dearly. Sick of everything she leaps off the cliff and plunges into the see where she almost dies in the hands of the ocean. Jacob comes to her rescue and tells of her friend Harry Clearwater’s plight. He is in hospital following a severe cardiac arrest. Bella immediately feels remorse for diving into the sea and returns to Jacobs’s house to rest and regain her strength. She begins to wonder what her life would bring if she left Edward and became romantically involved with Jacob.

Billy, Jacobs’s dad, returns home to break the news that Harry has passed away in his sleep.

Billy, Jacobs’s dad, returns home to break the news that Harry has passed away in his sleep. Bella then gets a ride home with Jacob. On the journey she notices Carlisle’s vehicle and jumps to the conclusion that the Cullen’s have returned to Forks. Jacob rages and leaves quickly. Alice is waiting for Bella by herself. Alice tells Bella that she witnessed her fall into the sea and worries that she was committing suicide. Bella denies this but Alice is still unsure and wonders why then she felt the need to dive so far into the water.

Jacob bumps into Bella during Alice’s visit and she sees he is still angry with her for choosing Edward over himself. During Jacobs time at the house Edward rings and masquerades as Carlisle. Jacob picks up the phone. He’s asked where Carlisle is by Edward and responds by telling him he’s at the funeral. Edward believes it’s the funeral of Bella in light of the news Alice told him. He attempts suicide. Upon news of this surfacing Bella and Alice leave for Italy to find Edward who is begging a Volturi to kill him. The Volturi deny his wishes so he attempts to enrage them by stepping into the sun and revealing the existence of Vampires to all.

Bella arrives just in time and prevents Edward from following through with his threats.

Bella arrives just in time and prevents Edward from following through with his threats. Shocked and confused that she is still alive and hasn’t been buried Edward shows affection toward his love. He believes these are the last few minutes the couple will ever spend together. Bella is confused, she believed Edward had no feelings toward her. The pair meets a Volturi leader by the name of Aro, he informs them that Bella must become a Vampire to preserve the secretive nature of the vampire kind. Edward vehemently disagrees but is shown conclusive proof that Bella will indeed become one of the vampire kind in the future.

At first Bella is surprised and in virtual disbelief that her long lost love Edward has returned. She wonders if she actually died while leaping from the cliff and whether or not this entire episode is in fact a dream. Edward soothes her concerns and explains that he loves her and that he didn’t wish to leave her at all. He tells her it was for her own benefit and an act to protect her. After a long discussion she realizes that his love for her burns as strongly as hers for him, and that they belong with one another for all eternity.

Edward is still unsure about turning Bella into a vampire.

Edward is still unsure about turning Bella into a vampire. She sees this and takes the decision out of his control. They visit the Cullen house and start a vote over her mortality, requesting the opinion of all involved and whether they believe she should join the Vampire kind. The results are definitive, all but Edward and Rosalie feel she should become a vampire. Edward is angered but reluctantly agrees she should be turned following her graduation the following week. Carlisle is the one who they decide should perform the embrace considering the fact he’s able to maintain control in the presence of human blood. Bella isn’t happy, she would of preferred the act to be carried out by Edward but settles with whatever the Cullen’s feel is best. Edward agrees but only on the condition they marry first.

During the epilogue of the story Bella reminisces and recalls her zombie like existence. She claims it was as if the previous seven months didn’t occur. Jacob returns the motorbike to Bella in an attempt to stop Edward from seeing her, unaware that he visits her every night by creeping into her room. Charlie is incredibly angry with Bella and grounds her immediately. She isn’t fazed though, she knows with the love her life Edward by her side there is nothing she cannot achieve and that when the dust of turmoil settles everything will be perfect.