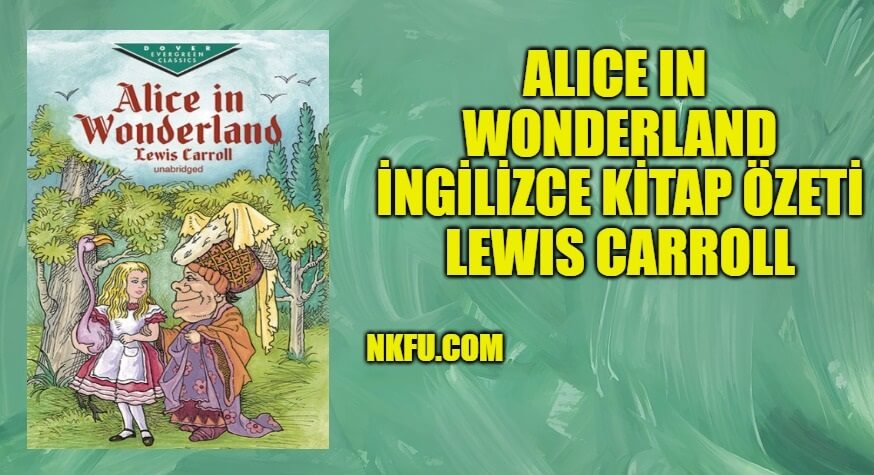 Alice in Wonderland Begins with Alice and her sister sitting by a tree. Alice’s sister is reading her a book. She just can’t pay any attention to the book, her reason; “How can one possible pay attention to a book with no pictures in it.” Her sister replies; “My dear child, there a great many good books in this world, without pictures.”

Alice now is beginning to dream about how her world. In her world, the books would be nothing but pictures. As she is explaining her world to Dinah, her cat, a white rabbit in a waistcoat runs by them. Alice follows the rabbit to his rabbit hole. There, her and her cat squeeze into the hole. She leaps down into the hole below and is now finding herself falling. She didn’t hesitate when she leaped downward. She thought it was a leap in a spirit of adventure.

She has landed safely at the bottom of the hole. She hears the rabbit yelling; “Oh my ears and whiskers, im late, im late, im late!” Alice looks around in the hall that is paneled by “strange doors.” How curious she is, she does not open them.

At the end of the hall she finds a glass table.

On top of the table she sees a little bottle and a gold key. The bottle is marked “drink me”, being as thirsty as she was she took a sip of it. The room seemed to be getting bigger to her all of the sudden, but that wasn’t the case, she was getting smaller. She tried the little door that the rabbit had gone through but it was locked. She had forgotten the key that was on the table.

Alice starts to cry and a box with a cake in it appears. She eats the cake and becomes big again. Now when she is a giant, and cant fit through the door she starts to cry again. Now the room is filled with a sea of tears. The bottle is found floating by her, she picked up the bottle and finished it to the last drop, which made her the right size to fit through the door.

Alice is now floating in the pool of tears. She finds herself in a heated argument about how to dry off with the parrot. He thinks he knows the best way to dry off. They keep fighting over who is right until she walks off in a fury of anger.

In an immediate, yet magical shift, Alice suddenly finds herself at the white rabbits house. The rabbit mistakes her for his servant, Mary Ann. He sees her and tells her to fetch his gloves and fan. She soon finds the fan and gloves, and is drawn again to another bottle labeled “drink me.” She drinks the liquid and becomes large yet again. The other servants start throwing things at Alice. The white rabbit goes and finds “little” Bill to climb down the chimney and pull her out. Alice now finds another little cake in her presence. She eats the cake having the reverse effect on her than the liquid has. She is now small, 3 inches to be exact. Alice is spotted by the puppy and is chased until she finds it safe enough to continue on her journey.

By this time, Alice is well acquainted with the principle of Wonderland’s chaos: logic.

Soon, Alice finds herself at the house of the march hare. Since it was may, the hare should only be mad in march, but again she was wrong. She takes a nibble of the mushroom making her self taller. Being taller, she feels that she has more self confidence. At the hares house there was a tea party going on. It turns out that it was a mad tea party. It is always six o’clock, with no time to wash dishes, it was always tea time.

At last, Alice finds herself in a garden at the palace.

Here she meets a whole new realm of characters, animated playing cards. She finds out that the spades were gardeners, clubs were the police, diamonds were courtiers, and the hearts were the royal court.

The Queen invites Alice to a game of croquet with the duchess and herself. Here Alice talks rudely to the Queen, in return, the Queen shouts “ off with her head.” Alice disagrees and wants a trial first. During the trial she eats more mushrooms to make her self taller. She becomes tall again and picks up the cards and tosses them to the side.

Finally, realizing that the whole thing was a dream she runs back to the door with every body in wonderland chasing her, all the way screaming “Alice wake up, please wake up Alice!” She wakes up to find that she has just fallen asleep in her sisters lap.m.