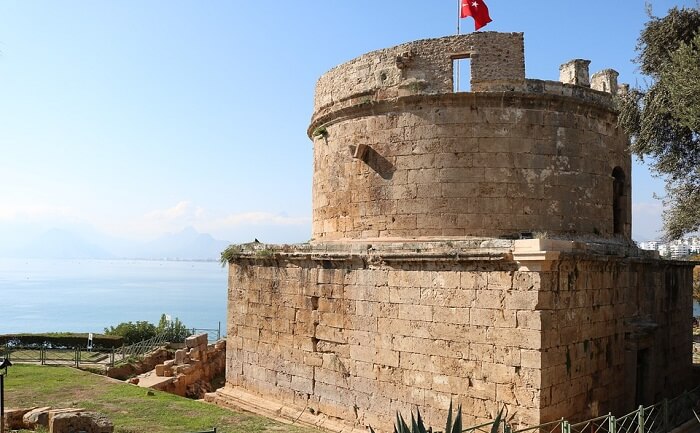 Antalya is a city in southern Turkey. The city is in the Mediterranean Region and along the coast of Mediterranean Sea. 2.158.265 people live there. Antalya is the most important tourism destination in Turkey and one of the best in Mediterranean. The city created a good image and its name started to be known to tourists. Every year mostly British, Russian, and German tourists come to city for beautiful beaches and the ancient destinations.

Antalya; is a port city on the Mediterranean coast of Turkey. It was formerly known as Adalya and to medieval Europe as Satalia. Picturesquely situated on steep cliffs overlooking the Gulf of Antalya, the city is third in importance of Turkey’s Mediterranean ports, after Mersin and iskenderun. The harbor is not deep, however, and only ships of very shallow draft can put into the port. All others must anchor in the roads and be served by tender.

In recent years the growth of tourism has opened new avenues of development. Except for the excessive heat of July and August, the climate is mild and sunny throughout the year. The city’s seclusion from industry, its miles of beaches, its palm-shaded streets and parks, and the great wealth of relics of classical antiquity in its vicinity have accelerated its conversion into a Turkish “Riviera.”

The city was founded by King Attalus II of Pergamum (reigned 159-138 b.c.) and called Attaleia. Until taken by the Romans in 79 b.c., it was a notorious pirate haven. It became a senatorial province of the Roman empire about 43 a.d., and because of the great increase in maritime activity it replaced in importance the older neighboring cities of the Pamphylian plain, Perge, Aspendos (Belkis), and Side. In 1207 it was taken from the Byzantines by the Anatolian Seljuks. About the beginning of the 14th century, Antalya passed to the Teke Begleri, a branch of the Turkman dynasty of the Hamidoglu, who lost it to the Ottomans in 1423.