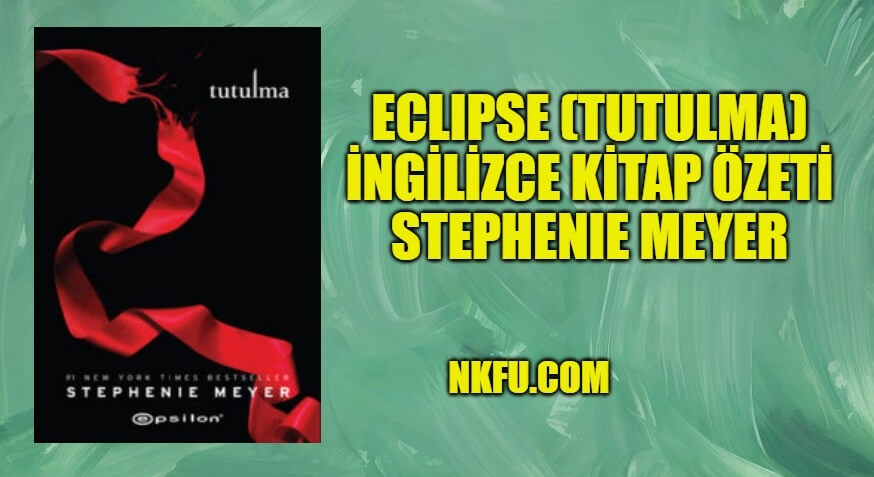 This part of the story starts with the note Jake sent to Bella. It speaks of him missing her and that it changes little. Charlie blames Edward for Bella’s disappearance in New Moon as she travelled to Italy and her apparent craziness. He no longer likes Edward and shows with every ounce of his being that the vampire is welcome in the home. Seattle is also hit by a string of unsolved killings. Bella and Edward spend some time filling in college application forms and she tells Edward her plans and need to see Jacob once again. Naturally, Edward is against it, telling her werewolves are random and unpredictable, hurting those around them.

In the meantime, Alice has a strange vision in which Bella is being hunted by a vampire.

In the meantime, Alice has a strange vision in which Bella is being hunted by a vampire. Edward hides this information from Bella and plans a trip to Florida with Charlie to see her mother out of town. Upon their return Edward is confronted by an angry Jacob, he demands to know why the return of Victoria is being kept secret to Bella and why they crossed into werewolf territory chasing Victoria. Bella is dumbfounded as Edward informs her that the trip away from Forks was for her own personal safety.

Once again, Edward insists Bellas banning from seeing Jacob is to keep her safe and away from the dangerous werewolf. Bella, unbelieving insists that the pack are quite safe and that she’s never in harm’s way around Jacob. Finally, Edward yields and travels to the border with Bella where they meet Jacob and travel on to his house. During one such visit Jacob pleads his love for her and forcefully kisses her against her will. Unable to resist his power she fights him off with all the strength she can muster. When he ceases the kiss she punches him as hard as she is able but only manages to break the bones in her delicate hands. Werewolves incidentally, are nearly as durable and tough as vampires.

When Bella returns home and he learns of this Edward threatens Jacob angrily.

When Bella returns home and he learns of this Edward threatens Jacob angrily. Jacob tells Edward what occurred and they finally settle on a deal to work in unison to deal with Victoria. Later on that evening when Jacob has left, Edward and Bella decide to marry but only on the one condition that is they sleep together before she is turned into a Vampire. Edward realizes the severity in Bella’s voice and eventually agrees to try in the future but only once they have married first.

Bella speaks of her concerns of what people will say and think if she marries at such a young age, this is partly confounded by her mother’s life and the fact she too married at such a young age. Spending the rest of eternity with Edward is of the utmost importance to her though, and when Edward proposes she quickly accepts. In an effort to keep her reluctant marriage secret she refuses to place the engagement ring on her hand.

Bella soon realizes that her possessions have been stolen from her room to use for scent and locating purposes. Also, it becomes apparent that the recent killings in Seattle are being perpetrated by a coven of young vampires. Bella realizes the connection and the fact Victoria has been leading these newborns. Alice predicts an epic battle between the combined force of Cullens and Werewolves and the Victoria coven. A meeting between the Quileutes and Cullens is scheduled in the forest. During the gathering Jasper highlights and demonstrates some skills and points needed to excel in combat versus a newborn Vampire. Bella, worried Edward will be harmed asks him to stay away when the combat begins.

Bella and Edward camp in the hills as the preparations for battle are made.

Bella and Edward camp in the hills as the preparations for battle are made. They are soon joined by Seth and Jacob who too wait for the coming war. They use Bella’s scent and lay a trap to lead the newborns into the hands of the conjoined vampire and werewolf force. Bella enters a state of hypothermia in the freezing cold mountain conditions. Jacob taunts Edward by climbing in the sleeping bag with his girl. Bella pretends to be asleep and eavesdrops on the conversation between the vampire Edward and werewolf Jacob. Jacob speaks of his feeling towards Bella and confesses to Edward. Upon hearing this, Edward realizes that Jacob can give Bella something he can’t and the two come to an agreement.

Later in morning once they have risen, Edward speaks to Bella about the engagement, Jacob, who was hiding and listening to their conversation lets out an angered and hurt howl of pain. He leaves quickly before they can catch him. Bella speaks with Edward and asks him to go and find Jacob. Upon their return Edward leaves to allow Jacob and Bella to speak. Jacob threatens to get himself killed by joining in the conflict, upon hearing her dismay and the fact she doesn’t want him to Jacob blackmails her into kissing him. He says kissing him will stop him joining the fight and getting killed. She agrees and they kiss, a kiss that beckons the realization that she has feelings for Jacob but she’s in love with Edward far more than he.

Edward returns, having overheard the entire conversation. He explains that he isn’t angry with her for having such deep feelings for Jacob. This is a fact that makes Bella even more miserable than she was before. Victoria and the newborns attack during the groups stay at the camp. The combined werewolf and vampire force completely decimate and slaughter the inexperienced newborn army.

Victoria had this planned though;

Victoria had this planned though; she skirts the fight and arrives at the camp to confront Edward and Bella alongside a newborn by the name of Riley. Edward pleads with Riley, trying to put him off the fight and explains the fact Victoria is using him. Victoria convinces Riley otherwise and he refuses to switch allegiance. A fight occurs in which Riley is killed by the Lupine form of Seth and Victoria is killed by Edward. Bella watches the entire episode, causing Edward to worry for her thoughts and feelings toward him after seeing him as the unstoppable killing machine he is. She is unperturbed and throws herself into his embrace. She loves him dearly and has concerns for his safety and wellbeing alone.

The war is over long before the Volturi arrive to tidy things up.

The war is over long before the Volturi arrive to tidy things up. Edward is reminded of his agreement to turn Bella into a vampire. Alice replies that they have set a date.

Bella goes to visit Jacob who was injured in the fight. She reveals her final decision is Edward. Her love for him is far greater than anyone else alive and she hasn’t the will or desire to live another day without him around.

Bella later returns home from La Push. She speaks with Edward who announces that they don’t have to marry, that Bella can have her way without completing her wishes. Bella states that she wishes to do things Edwards’s way, and they agree to continue with the wedding first. He puts the ring on her finger and they both agree to reveal the great news to Charlie.