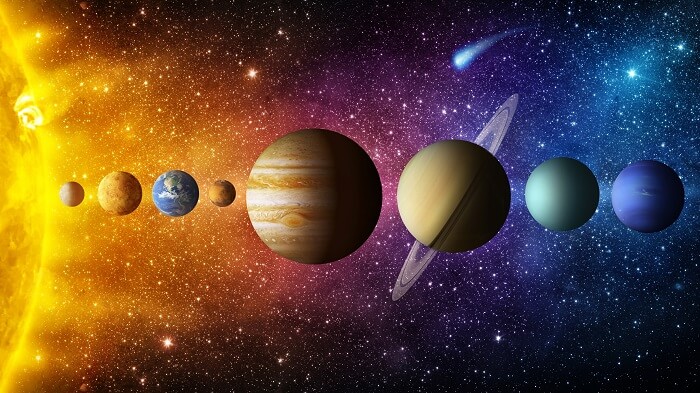 A planet is a heavenly body that orbits the sun. It doesn’t have heat or light of its own. There are nine planets in our solar system.

The planet closest to the sun is Mercury. It is the smallest planet in the solar system. Mercury can not usually be seen because it is too close to the sun. Its surface is filled with craters and it has a very thin atmosphere which is mostly helium. Its temperature is more than 420 °C during the day and -175 °C at night.

After the moon Venus is the brightest heavenly body in the night sky. The rotation of most planets is counter clockwise, however Venus and Uranus rotate clockwise. The atmosphere of Venus is mostly carbondioxide, with sulphur and sulphuric acid, which give the clouds a yellow color. The temperature is very high (more than 400 °C) during the day.

Earth is the third planet from the sun. It completes its revolution in about 365 days on a pathway which is an ellipse. Earth rotates on its axis once in 24 hours. Our measurement of time is based on these motions. The earth’s atmosphere contains nitrogen, oxygen, water vapor and small amounts of other gases. It is a planet with oceans, seas, rivers and other features.

Because of the water on the surface and its atmosphere Earth is the only planet in our solar system which has life as we know it. The Earth is thought to be about 4,5 billion years old.

The Earth’s Satellite Is Called The Moon

The moon is 385000 kilometers from the earth. Its diameter is 3500 kilometers, which is about 1/4 of that of the earth. When Galileo first turned his telescope to the moon in 1610, he saw its surface in detail. Beginning in the 1960’s artificial satellites, space probes and rockets were sent from the earth to the moon. In 1969 astronauts landed on the moon.

This is called the red planet. Mars has a thin atmosphere which is mostly carbondioxide. Also there are small amounts of oxygen, nitrogen, and water vapor.

Is there life on Mars?

People have liked to think that there is life on Mars. This idea was very popular after the 19 th century. But photographs taken by the Viking 1 space probe shows no plant life on the planet.

Many large plains are seen, but the planet’s surface is not smooth. It is covered by rocks,large craters, and mountains. It has two satellites.

The Great Red spot on Jupiter is its most unusual characteristic. It is not yet certain what caused the Great Red spot. Jupiter which also has a ring, like the planet Saturn.

This is the ringed planet. The most unusual thing about Saturn is its rings of which over one thousand have been discovered. They are made up of ice particles. Saturn’s atmosphere contains hydrogen, methane and ammonia. It has at least 20 satellites.

Uranus is another planet with dark rings. It also has 15 satellites. As it is far from the Sun the surface temperature is very low.

Neptune is another planet in the solar system which is similar to the size and structure of Uranus. It has two satellites.

It is made up of rocks and ice. The surface temperature of Pluto is -220 °C. All measurements of Pluto are uncertain because of its great distance from earth and its small size.  At first, Pluto was called a planet. Now, it is considered the second largest of the bodies in the Kuiper belt.