Pablo Picasso was born in Málaga, Spain. When he was baptized, he was named after various saints and relatives: Pablo Diego José Francisco de Paula Juan Nepomuceno María de los Remedios Cipriano de la Santísima Trinidad Martyr Patricio Clito Ruíz y Picasso. His father, Jose Ruiz Blasco, was an artist and art professor who gave Pablo art lessons. His mother was Maria Picasso y Lopez. According to his mother, his first word was “piz” when he was trying to say “lápiz,” the Spanish word for pencil.

Picasso was not a good student. He often had to go to detention. Here’s what he said about it. “For being a bad student I was banished to the ‘calaboose’ – a bare cell with whitewashed walls and a bench to sit on. I liked it there, because I took along a sketch pad and drew incessantly … I could have stayed there forever drawing without stopping.”

When he was nine, Picasso finished his first painting, Le picador. It shows a man on a horse at a bullfight. When he started painting, he used a realistic style. He began to experiment with different techniques and styles. When he was 13, he was admitted to the School of Fine Arts in Barcelona, Spain. When he was 16, Picasso’s father and uncle decided to send him to Madrid’s Royal Academy of San Fernando. This was Spain’s top art school. He did not like formal instruction and soon stopped going to classes. He loved Madrid and enjoyed going to The Prado museum to see paintings by famous Spanish painters. He particularly like El Greco’s work.

In 1900, Picasso went to Paris. He met Max Jacob, a journalist and poet. Max helped Picasso learn to speak French. He also met many of the famous artists who lived in Paris. In 1905, American art collectors Leo and Gertrude Stein began to collect his work and helped to make him famous. 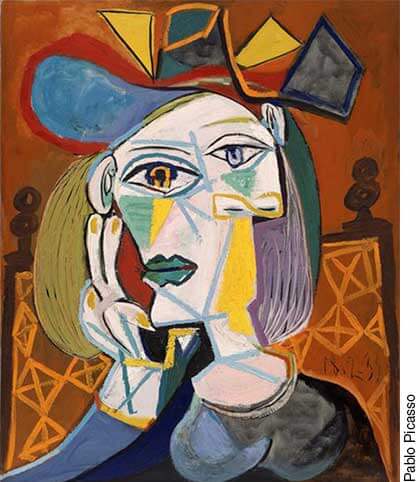 He and Georges Braque invented Cubism, a form of painting that featured simple geometric shapes. He is also known for making collages – gluing previously unrelated things together with images. He created oil paintings, sculpture, drawings, stage designs, tapestries, rugs, etchings, collage, and architecture. No other painter or sculptor was as famous while he was still alive. It is estimated that Picasso produced at least 50,000 works of art: 1,885 paintings; 1,228 sculptures; 2,880 ceramics, roughly 12,000 drawings, many thousands of prints, and numerous tapestries and rugs. He also wrote plays and poetry. He became very wealthy.

Some of his famous paintings include:

The Old Guitarist; Asleep and Seated Woman, which portray Marie-Therese Walter, one of the women he loved; Guernica, a mural about the Spanish Civil War; and Three Musicians.

Picasso loved many women. He married two of them, Olga Khokhlova and Jacqueline Roque. He had four children: Paulo, Maya, Claude and Paloma, who is famous for her jewelry designs. He died April 8, 1973 in Mougins, France.