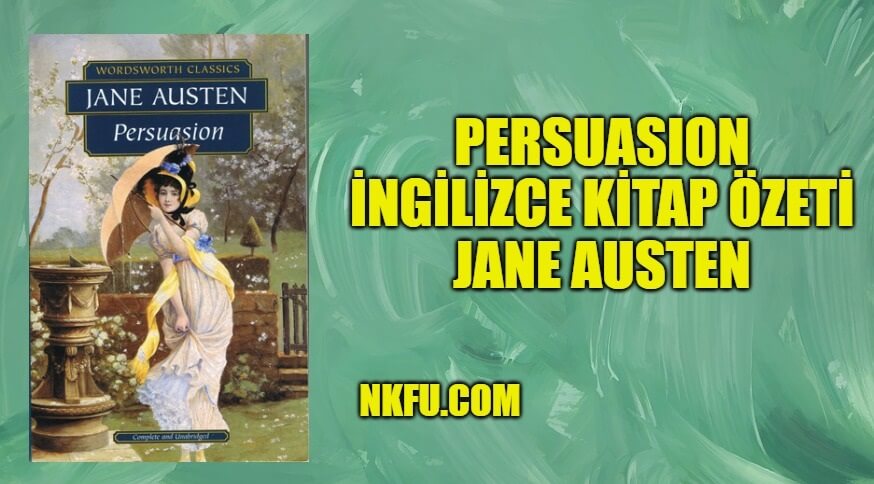 The Elliot family is in financial trouble, needing to reduce expenses. The family estate, Kellynch Hall will be let, and the family will settle in Bath until finances improve. Baronet Sir Walter, the vain, socially-conscious father and his eldest daughter Elizabeth look forward to the move. Second daughter Anne Elliot is less sure she will enjoy Bath, so she plans visits before joining her father and sister. Anne takes after her late mother, while Elizabeth takes after her father.

The youngest sister Mary is married to Charles Musgrove of nearby Uppercross Hall, the heir to a respected local squire. Anne finishes tasks of moving out, and then visits Mary and her family; Anne is well-loved by her sister’s children and in-laws. During that visit, Wentworth reenters Anne’s life. Kellynch’s tenants are Wentworth’s sister, Sophia, and her husband, the recently retired Admiral Croft. Frederick visits his sister and soon meets the Uppercross family, including Anne.

The Musgroves, including Mary, Charles, and Charles’s sisters, Henrietta and Louisa, are happy to welcome the Crofts and Wentworth. He is cautious with Anne, whom he says he almost does not recognize, and friendly and attentive with the Musgrove girls, who both respond in kind. Henrietta is engaged to her clergyman cousin Charles Hayter, who is away for the first few days that Wentworth joins their social circle. Both the Crofts and Musgroves enjoy speculating about which sister Wentworth might marry. Once Hayter returns, Charles Musgrove persuades his sister to talk with him again, leaving the field to Louisa.

Anne still loves Wentworth, so each meeting with him requires preparation for her own strong emotions. She overhears a conversation where Louisa mentions to Wentworth that Charles first proposed to Anne, who turned him down. This is startling news to him.

This is startling news to him.

Anne and the young adults of the Uppercross family accompany Captain Wentworth on a visit to two of his brother officers, Captain Harville, in the coastal town of Lyme Regis and Captain James Benwick. Benwick is in mourning for the death of his fiancée, Captain Harville’s sister, and he appreciates Anne’s sympathy and understanding. He admires the Romantic poets, whom Anne reads also.

The visit to Lyme agrees with Anne, who shows the life and sparkle that Captain Wentworth remembered. She attracts the attention of a gentleman passing through Lyme, the heir to the Elliot estate, William Elliot, who broke ties with Sir Walter many years earlier. At first sight, he does not know who she is. The last morning of the visit, Louisa Musgrove sustains a serious concussion in a fall brought about by her impetuous behaviour with Wentworth. Anne coolly administers first aid and summons assistance. Wentworth is impressed with Anne, while feeling guilty about his actions with Louisa. He re-examines his feelings about Anne.

Following this sad accident, Anne travels to Bath with Lady Russell to join her father and sister, while Louisa, and her parents, stay in Lyme to recover her health at the Harvilles. Wentworth visits his older brother in Shropshire. In Bath, Anne finds that her father and sister adapt to their new home. They are flattered by the attentions of William Elliot, recently widowed, who has now reconciled with Sir Walter. Elizabeth assumes that he wishes to court her while Lady Russell more correctly suspects that he admires Anne. Although Anne likes William Elliot and enjoys his company, she finds his character disturbingly opaque.

Admiral Croft and his wife arrive in Bath, and soon afterward comes the news that Louisa Musgrove is engaged to Captain Benwick. Wentworth comes to Bath, where he is not pleased to see Mr Elliot courting Anne, which Anne notices. He and Anne renew their acquaintance. Anne visits an old school friend, Mrs Smith, who is now a widow living in Bath in straitened circumstances.

Through her she discovers that behind his charming veneer, Mr Elliot is a cold, calculating opportunist who had led Mrs Smith’s late husband into crippling debt, and as executor to her husband’s will, takes no actions to improve her situation. Although Mrs Smith believes that he is genuinely attracted to Anne, she feels that his first aim is preventing Mrs Clay from marrying Sir Walter. A new marriage might mean a new son, and the end of Mr Elliott’s inheritance. Anne is shocked and dismayed by this news.

The Musgroves visit Bath to purchase wedding clothes for Louisa and Henrietta, both soon to marry. Captains Wentworth and Harville encounter them and Anne at the Musgroves’ hotel in Bath, where Wentworth overhears Anne and Harville conversing about the relative faithfulness of men and women in love. Deeply moved by what Anne has to say about women never giving up their feelings of love even when all hope is lost, Wentworth writes her a note declaring his feelings for her.

Outside the hotel, Anne and Wentworth reconcile, affirm their love for each other, and renew their engagement. William Elliot leaves Bath with Mrs Clay, whose charming ways may yet attract him. Lady Russell admits she was wrong about Wentworth; she and Anne remain friends. Once Anne and Frederick marry, he helps Mrs Smith recover some of her lost assets. Anne settles into life as the wife of a Navy captain, he who is to be called away when his country needs him.