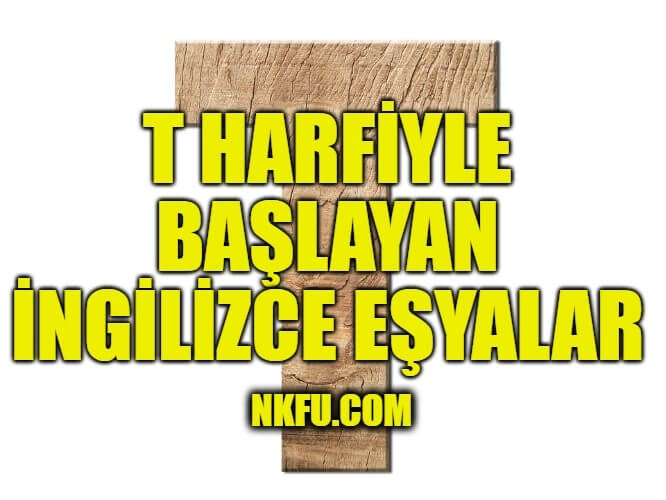 an article of furniture consisting of a flat, slablike top supported on one or more legs or other supports
Türkçesi: Masa

a spoon larger than a teaspoon or a dessert spoon, used in serving food at the table and as a standard measuring unit in recipes.
Türkçesi: Çorba kaşığı

a small drum formerly used to accompany oneself on a pipe or fife.
Türkçesi: Dümbelek

a small drum consisting of a circular frame with a skin stretched over it and several pairs of metal jingles attached to the frame, played by striking with the knuckles, shaking, and the like.
Türkçesi: tef

a long, narrow strip of linen, cotton, or the like, used for tying garments, binding seams or carpets, etc.
Türkçesi: bant

an electrical device for recording or playing back sound, video, or data on magnetic tape.
Türkçesi: kasetçalar

a pendent ornament consisting commonly of a bunch of threads, small cords, or other strands hanging from a roundish knob or head, used on clothing, in jewelry, on curtains, etc.
Türkçesi: püskül

a cup in which tea is served, usually of small or moderate size.
Türkçesi: çay Kupası

a container with a lid, spout, and handle, in which tea is made and from which it is poured.
Türkçesi: demlik

a toy bear, especially a stuffed one.
Türkçesi: oyuncak ayı

an apparatus, system, or process for transmission of sound or speech to a distant point, especially by an electric device.
Türkçesi: telefon

The definition of a telescope is an optical instrument that makes far away objects look closer by using a special arrangement of lenses and mirrors.
Türkçesi: teleskop

the transmission of programming, in the form of still or moving images, via radio waves, cable wires, satellite, or wireless network to a receiver or other screen.
Türkçesi: televizyon

a hollow ball used in tennis, made of rubber with a fuzzy covering of woven Dacron, nylon, or wool.
Türkçesi: tenis topu

A type of bat used to strike the ball in tennis; it has an oval frame with a taut interlaced network of strings
Türkçesi: tenis raketi

a portable shelter of skins, canvas, plastic, or the like, supported by one or more poles or a frame and often secured by ropes fastened to pegs in the ground.
Türkçesi: çadır

a framework on which cloth in the process of manufacture is stretched so it may set or dry evenly.
Türkçesi: Gergef

a tent of the American Indians, made usually from animal skins laid on a conical frame of long poles and having an opening at the top for ventilation and a flap door.
Türkçesi: kızılderili çadırı

The definition of a thermometer is a tool used to measure temperature.
Türkçesi: Termometer

a container, as a bottle, flask, or jug, for keeping liquids at almost their original temperature for several hours: it has two walls enclosing a vacuum and is fitted in a metal or plastic outer case
Türkçesi: Termos

a fine cord of flax, cotton, or other fibrous material spun out to considerable length, especially when composed of two or more filaments twisted together.
Türkçesi: İplik

a band of decorative fabric worn around the neck, under the collar, and tied in front to hang down the front of a shirt or to form a small bow.
Türkçesi: Kravat

a thin slab or bent piece of baked clay, sometimes painted or glazed, used for various purposes, as to form one of the units of a roof covering, floor, or revetment
Türkçesi: Kiremit

a stamped piece of metal, issued as a limited medium of exchange, as for bus fares, at a nominal value much greater than its commodity value.
Türkçesi: Jeton

a drum of American Indian or Asian origin, commonly played with the hands.
Türkçesi:Darbuka

a small brush with a long handle, for cleaning the teeth.
Türkçesi: diş Fırçası

a dentifrice in the form of paste.
Türkçesi: diş macunu

a small pointed piece of wood, plastic, etc., for removing substances, especially food particles, from between the teeth.
Türkçesi: Kürdan

a light to be carried in the hand, consisting of some combustible substance, as resinous wood, or of twisted flax or the like soaked with tallow or other flammable substance, ignited at the upper end.
Türkçesi: Meşale

an absorbent cloth or paper for wiping and drying something wet, as one for the hands, face, or body after washing or bathing.
Türkçesi: havlu

an object, often a small representation of something familiar, as an animal or person, for children or others to play with; plaything.
Türkçesi: Oyuncak

a sheet, usually of canvas, attached by resilient cords or springs to a horizontal frame several feet above the floor, used by acrobats and gymnasts as a springboard in tumbling.
Türkçesi: trambolin

any of various tools having a flat blade with a handle, used for depositing and working mortar, plaster, etc.
Türkçesi: mala

a lightweight, usually knitted, pullover shirt, close-fitting and with a round neckline and short sleeves, worn as an undershirt or outer garment.
Türkçesi: T-Shirt

a machine for writing mechanically in letters and characters like those produced by printers’ types.
Türkçesi: daktilo