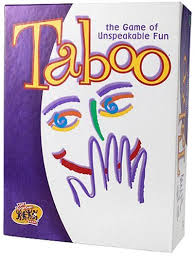 Taboo is a verbal game played with two teams of three players or more, a deck of 502 guess cards with a set of taboo words, and a battery operated buzzer. The buzzer requires two AA batteries.

Play is continued until time runs out. Each time a teammate successfully guesses a clue-word, a new card is placed upon the old and each card in this pile represents one point for Team A.

1 Divide the players into two teams. Place the buzzer and cards in the center of the table.

2 Choose one person from a team to be the first clue giver. She sits opposite her team and draws a card and starts the timer. The card should be hidden from her team but visible to at least one of her opponents. That opponent should hold the buzzer.

4 Score one point for the clue giver’s team for each word they guess correctly. There is no penalty for wrong answers.

Every card stacked upon another in the card holder represents one point for Team A.
Every card stacked in the discard pile represents one point for Team B.
The final card in play when time runs out is worth no points for either team.
At the end of each round points are tallied for each team, the winner is declared by the team with the most points.