Once upon a time a fisherman lived in a small wooden house situated on a beautiful sand beach. He didn’t live alone. He had a wife who he loved immensely. He loved the waves, the deep, blue see and he adored fishing. He would sing on the way and talk to animals. 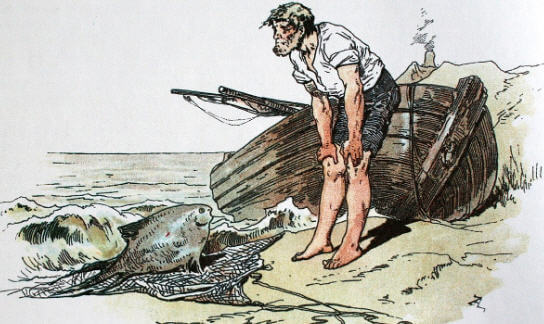 His wife was almost never in a good mood. She didn’t like their house, and she wanted a big house where she would have servants and a closet filled with beautiful dresses. Every day she would reproach him about not making enough money to fulfill her needs.

He would stay out fishing until tiredness would kick in. While he was fishing the wife did some gardening, but they didn’t grow many vegetables due to the climate.

The fisherman went to the sea like every other day, and he would see the sun rise. That beautiful picture filled him with joy, and he was happy that it’s not going to rain like it did the other day. He thought he could catch much more fish that the previous days.

He was persistent in his desire to catch something, but every time he threw the bait the crabs would eat them. He didn’t know what to do because he couldn’t come back home empty handed to his wife because she would be furious.

While he was thinking about that, he caught a fish.

While he was thinking about that, he caught a fish. It was huge, and he barely got it out of the sea. When he placed her into his boat, she started to talk. She asked to be returned to the sea and that she will grant him three wishes if she grants her one. The fisherman let her go but didn’t ask for anything.

He went home and told his wife about everything that had happened. She was furious with him letting go of the fish without making any demands. He didn’t quite understand his wife and she asked him didn’t he think it was strange for the fish to talk. He still stared at her, and she ordered him to go back tomorrow and get the fish back to grant him three wishes.

He went fishing so he wouldn’t have to listen to his wife’s reproaches but he didn’t hope to see the fish again because his wife wanted nothing else but a big house with expensive furniture, a garden, and a henhouse.

The fisherman called for the fish, and she dived out of the sea and asked him what he wanted. He told her about his situation with his wife, and she asked him what his wife’s wishes were. The humble fisherman told her that she wanted a big house with expensive furniture, a garden, and a henhouse.

The fish granted his wishes because of his kindness and then she disappeared again. The fisherman went to the house, and he saw the magnificent house his wife wanted. The inside and the inside of the house were luxuriously decorated, and the closet was filled with beautiful dresses. The fisherman’s wife sat in her chair and watched the chandelier.

The fisherman was happy because his wife got her wish and he felt fine living in a bigger house instead of a small cottage.

After a few days, his wife started complaining again.

After a few days, his wife started complaining again. She told him that the garden was too small and that it wasn’t shined enough so the crops will go to waste and also she didn’t want to clean the henhouse anymore. He asked her why wasn’t she happy with the big house, henhouse, and the full closets anymore. He didn’t understand how she could be miserable with all that they have while the other fishermen are still living in small cottages.

She didn’t give up and ordered him to ask the fish for a castle with towers and servants because she can’t clean anymore. She emphasized that the fish had to grant all of her wishes.

The fisherman tried to convince his wife that they didn’t need a castle next to such a big house but he couldn’t change her mind. He told her it was uncomfortable for him to ask the fish for more wishes but she didn’t listen.

He went to the sea and called the fish.

He went to the sea and called the fish. After a few days, his wife started complaining again.She came and listened to him. She understood him and granted his wife’s wishes.

When he came to the house, he saw a magnificent castle with towers and a patio. He ran to his wife, and they explored the castle together. One room was prettier that the other with magnificent mirrors and crystal chandeliers. The tables were filled with silver, and gold dishware, and the servants brought them their meal.

The next day they kept on exploring the castle, so they walked around the patio and went to the stables. Wherever they stepped the servants bowed down to them. The husband wanted to know was his wife pleased with her last wish being granted and she confirmed she was, but she had an another wish. She wanted to become the queen. She told her husband to go and find the fish.

Unfortunately, the fisherman’s convincing that a castle is enough weren’t enough because the woman was ruthless. He felt uncomfortable about asking the fish for another favor.

The fisherman went to the sea and called the fish who already knew he had another wish. He didn’t even pronounce the desire because she already knew his wife wanted to become the queen.

The fisherman was surprised but happy that he didn’t have to explain himself to the fish again, and she granted his wife’s wishes.

The fisherman got back to the castle

When the fisherman got back to the castle, he saw the new queen that wasn’t as pretty as a queen is supposed to be. She was obese, had a crown and pearl necklace and many golden bracelets.

The fisherman was desperate and hoped his wife would be happy about the new situation. She had servants who served her and a guard that watched her and the castle.

Her satisfaction didn’t last long and when the husband wanted to know the cause of her misery she told him she wanted to be an empress because she wanted to be something more than an ordinary queen. She ordered him to go back to the fish.

He had no courage to do it because the wish has already granted him more that she should have and he didn’t want to take advantage of her.

The wife didn’t give up this time either.

The wife didn’t give up this time either. Her greed was stronger than anything else, and he had to leave for the sea again, but he was so ashamed that he couldn’t look at the fish.

He asked her for another wish, and she said it would be granted. His wife was miserable again and wanted to become the pope. The fisherman was astonished by her request and refused to do it, but she made him do it.

He went back to the fish and asked for the impossible. He felt very uncomfortable, but the fish granted the wish. When he came home, his wife was unhappy again because this time, she wanted to be a God. He though she lost her mind and told her she would be punished for blasphemy. She made him go back to the fish.

He did it while a terrible storm was raging on outside. He tried to call for her, but she didn’t appear. He only heard the hauling of the wind, and when he came home, he saw the same, old, cottage with his unsatisfied wife in it.

He was thrilled about having things back to normal because he never wanted to live in a luxurious castle filled with expensive things. Now he could enjoy fishing again and what he would catch would be enough for him and his wife who was still unsatisfied.