Galileo was an Italian scientist, astronomer, and physicist. His works and achievements are among the most important in the history of science.

Galileo was born in Pisa, in the Tuscany region of Italy, in 1564. He was the first of six children. He was homeschooled through his early years and later attended the University of Pisa. At Pisa, Galileo first discovered the isochronism (how the time period it takes the pendulum to swing is independent of the arc of its swing) of the pendulum while observing a swinging lamp in the Cathedral of Pisa. This discovery would serve him well fifty years in the future when he developed the astronomical clock. Galileo soon became bored with his studies and eventually dropped out of the university. Nevertheless, he was offered a position as a mathematics professor there in 1589 after lecturing about the approximate size of Lucifer (from Dante’s Inferno) was about 2,000 arm lengths long, based on the author’s comparison of the demon to the “cone” of St. Peter in Rome.

While teaching at Pisa, Galileo conducted a legendary experiment in which he challenged Aristotle’s law that states that heavier objects fall at a faster rate than lighter objects. According to legend, Galileo went to the top of the Tower of Pisa and dropped various balls of different material, size, and weight from the top. When they all hit the ground at the same time, Galileo had proven Aristotle wrong. Galileo failed to publish his results, and because he was disliked by his colleagues, the University of Pisa failed to renew his contract as professor. 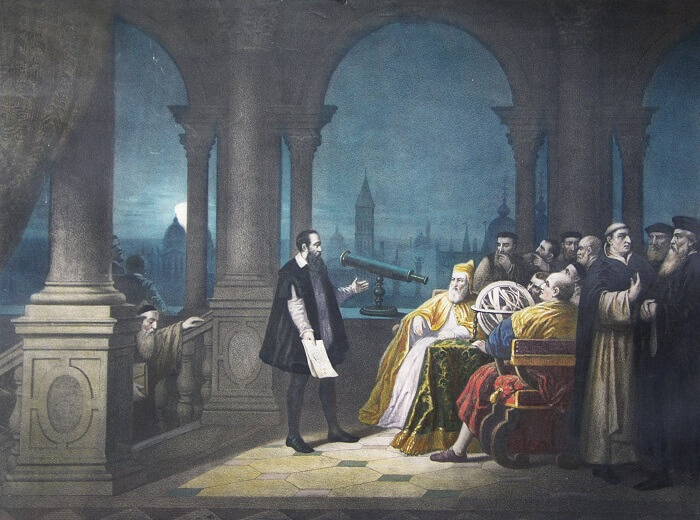 Galileo then joined the faculty at the University of Padua and taught geometry, mechanics, and astronomy. It was at Padua where he made many of his amazing discoveries. In 1596, Galileo invented a military compass that could be used to properly aim cannonballs. In 1609, he gained word that a Dutch spectacle-maker had invented a device called a spyglass. The spyglass (later called a telescope) made distant objects appear much closer. Before the Dutch inventor could secure a patent, Galileo quickly constructed his own 3-power telescope, and then a 10-power telescope to present to the senate in Venice. Galileo then used his telescope to document the surface of the moon, which he described as bumpy, cratered, and uneven. Galileo next created a 30-power telescope and observed Jupiter and three of its moons that seemed to rotate around the giant planet. Based on these observations, Galileo wrote a short book called The Starry Messenger in which he upheld the Copernican theory that the Earth and solar system rotated around the sun. The book caused quite a stir among powerful members of the Catholic Church, who believed the solar system rotated around the earth. Galileo was subsequently prohibited from teaching the Copernican theory.

Galileo soon began taking up other scientific interests. In one particular paper he published, Galileo explained theories on ocean tides by using three characters engaging in a “dialogue.” One character supported Galileo’s views, another character was open-minded, and the last was stubborn and foolish and represented Galileo’s enemies. He then wrote a similar book about the Copernican theory. Although the “dialogues” were very popular with the Italian public, the Pope believed that he was the model for the stubborn and foolish enemy of Galileo. The Pope ordered all of the “dialogues” banned and demanded that Galileo be tried for teaching the Copernican theory. Galileo was sentenced to house arrest and forced to confess that his views were flawed. He died in Florence in 1642.