GAZİANTEP, is the largest city of southern Turkey and the capital of Gaziantep province. It was formerly called Aintab. Situated in the fertile, hilly plain between the Amanos Mountains and the Euphrates River and lying athwart the natural caravan route to the east, the site has had civilized settlement since Hittite times. 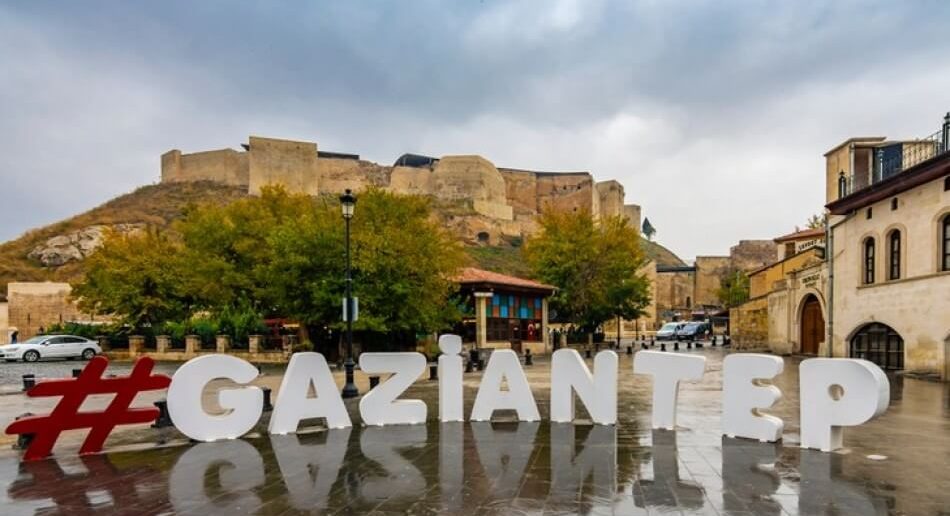 Gaziantep, previously and still informally called Aintab or Antep, is the capital of the Gaziantep Province, in the westernmost part of Turkey’s Southeastern Anatolia Region and partially in the Mediterranean Region, approximately 185 km (115 mi) east of Adana and 97 km (60 mi) north of Aleppo, Syria. It is thought to be located on the site of ancient Antiochia ad Taurum, and is near ancient Zeugma.

As of the 31/12/2021 last estimation, the Metropolitan Province was home to 2,130,432 inhabitants, of whom 1,775,904 lived in the built-up (or metro) area made of two (out of three) urban districts of Şahinbey and Şehitkamil, as Oğuzeli is not conurbated. It is the sixth-most populous city in Turkey.

Its proximity to the Syrian border, however, had always kept it in the unstable position of a frontier city, without continuity of government. Even after its conquest by the Ottomans in 1516, Aintab continued to be vulnerable to rebels and bandits. Its name was officially changed to Gaziantep (“Heroic Aintab”) in 1921 because of its resistance to the French occupation of 1920-1921.

Gaziantep is now quite modern in aspect, with only a few reminders of antiquity. Served by good transport, the city is important chiefly as a distribution center for the agricultural products of the province, especially pistachio nuts and fine grapes.

Gaziantep is famous for its regional specialities: Copperware and “Yemeni” sandals, specific to the region, are two examples. The city is an economic center for Southeastern and Eastern Turkey. The number of large industrial businesses established in Gaziantep comprise four percent of Turkish industry in general, while small industries comprise six percent. Also, Gaziantep has the largest organized industrial area in Turkey and holds first position in exports and imports. The city is centre of the Green olive oil-based Nizip Soap industry.