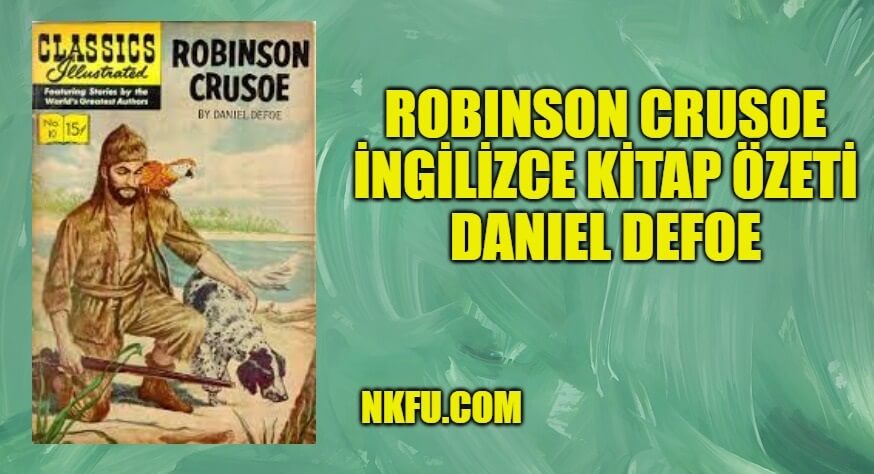 Robinson Crusoe is a young man that lives with his parents, they advise him to choose a suitable life, but Robinson is attracted by a different kind of life, a sea life.

On 1 September 1651, Hull,a Robinson’s friend invites him for a trip on a ship going to London. A big storm caught them, and Robinson is so scared that he promises himself to give up his dreams and obey his parents.

Once the storm is over and they reached the coast, Robinson soon forgets everything and decides to set sail to Guinea. Robinson also goes on a second voyage to Guinea, but this time he is captured by Moorish pirates and sold as a slave in North Africa. After sometime, providing himself with a gun and some provisions, Robinson escapes in a little boat with Xury, another slave. In their adventure sailing with no direction, Robinson is aware of the threats of the unknown West African coast, inhabited by wild animals and savage tribes.

Fortunately, a Portuguese ship heading to Brazil rescues Robinson and Xury. Once in Brazil, Robinson takes up a sugar cane plantation, but manpower is needed to work the plantation. Then Robinson embarks on a ship to Guinea in order to get slaves for the plantation.

Suddenly, a violent storm lashes the ship near the Caribbean Islands. The ship is driven out of its course and it finally sank. Robinson manages reach the coast of a desert island; he is the only survivor.

After an initial examination of the land, Robinson is able to rescue some provisions from the shipwrecked: muskets, pistols, gunpowder, food, clothes, ink, paper, tools, bibles, two cats and a dog. He builds a hut incrusted in a rock to protect himself from the tropical climate and to store safely all his provisions. He sets a calendar and writes a journal with his experiences, and teaches a parrot some words. 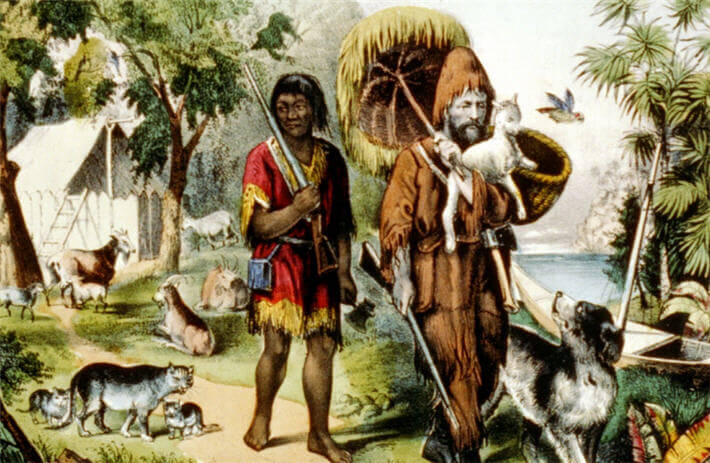 Initially, Robinson hunts goats and turtles to feed himself

Initially, Robinson hunts goats and turtles to feed himself. Later, he explores deeply the island and found rich grapes. He set traps to get goats alive to get them domesticated in order to assure him meat provision during the seasons of bad weather. He also sows wheat and he makes pottery and baskets.

One day, Robinson sees land on the horizon and he is determined to build a canoe with big trunk. It took long time to finish the canoe, however it is too heavy to be carried to the sea on his own. Then, he builds a smaller canoe and heads himself into the open sea, but a sea tide nearly makes him to drown.

After twelve years of solitude in the island, Robinson discovers footprints on the shore. Then he finds out rests of human bones. The idea of cannibals obsessed him enormously and he fears the cannibal’s rituals taking place periodically in the island.

A couple of years later, a Spanish ship sinks near the island. There are no survivors, but this supplies Robinson with new and fresh provisions.

One night, Robinson dreams that he saves a savage from death in a cannibal ritual, and like a premonition it happens later. The savage is named Friday and becomes his servant. Robinson teaches him English language, Christian religion principles and civi lised habits. Friday reveals Robinson that the cannibals have Spanish prisoners.

The cannibals revisit again the island.

The cannibals revisit again the island. Among their victims there is a Spaniard and Friday’s father. Robinson and Friday plan to rescue the victims shooting the cannibals.

The Spaniard tells Robinson that his compatriots live with Friday’s tribe. A plan to rescue them is set up with the condition of accepting Robinson’s leadership.

In the mean time, English mutineers arrived to the island dropping the captain of the ship and two of the crewmembers. Robinson meets them, and together they make a strategic plan to persuade the mutineers and recover the ship.

Eventually, after twenty years living on the desert island, Robinson returns to England with Friday.

Robinson is a rich man, his wealth proceeds from the Brazilian plantation and from the shipwrecked. Robinson goes to Portugal crossing Spain and France, and passing the Pyrenees, his convoy is attacked by wolfs and a wild bear, which is killed by Friday with amazing skill.

In his latest days, his adventurous spirit makes him to travel to the East Indies as a tradesman. Robinson also revisits his solitude island. He also travels to China, where he is involved in a real battle against looters. Finally, he returns to England.