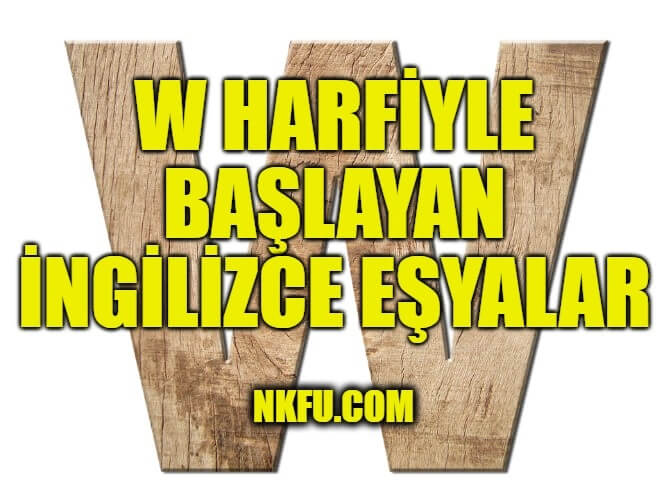 a flat ring or perforated piece of leather, rubber, metal, etc., used to give tightness to a joint, to prevent leakage, to distribute pressure, etc., as under the head of a nut or bolt.
Türkçesi: Rondela

a small, portable timepiece, as a wrist watch or pocket watch.
Türkçesi: Saat

a household appliance consisting of a gas or electric heating unit under a tank in which water is heated and stored.
Türkçesi: Şofben

any instrument or device for use in attack or defense in combat, fighting, or war, as a sword, rifle, or cannon.
Türkçesi: Silah

The clothing worn by a bride during a wedding ceremony, in Western culture traditionally white with a long train.
Türkçesi: Gelinlik

A ring, often one of a pair of plain gold or platinum bands, given during the wedding ceremony by the groom or bride to his or her future spouse
Türkçesi: Alyans

a mechanical device, often coin-operated, for determining the weight of an object or person
Türkçesi: Baskül

any machine, apparatus, instrument, etc., shaped like this or having a circular frame, disk, or revolving drum as an essential feature
Türkçesi: tekerlek

an instrument for striking, as in driving animals or in punishing, typically consisting of a lash or other flexible part with a more rigid handle.
Türkçesi: Kırbaç

an instrument for producing whistling sounds by means of the breath, steam, etc., as a small wooden or tin tube, a pipe, or a similar device with an air chamber containing a small ball that oscillates when air is forced through an opening, producing a high-pitched, warbling tone.
Türkçesi: düdük

plaited or woven twigs or osiers as the material of baskets, chairs, etc
Türkçesi: Hasır

an artificial covering of hair for all or most of the head, of either synthetic or natural hair, worn to be stylish or more attractive.
Türkçesi: peruk

a woman’s headcloth drawn in folds about the chin, formerly worn out of doors, and still in use by some nuns.
Türkçesi: atkı

any of various machines for grinding, pumping, etc., driven by the force of the wind acting upon a number of vanes or sails.
Türkçesi: Fırıldak

an opening in the wall of a building, the side of a vehicle, etc., for the admission of air or light, or both, commonly fitted with a frame in which are set movable sashes containing panes of glass.
Türkçesi: pencere

a slender, stringlike piece or filament of relatively rigid or flexible metal, usually circular in section, manufactured in a great variety of diameters and metals depending on its application
Türkçesi: Tel

the fine, soft, curly hair that forms the fleece of sheep and certain other animals, characterized by minute, overlapping surface scales that give it its felting property.
Türkçesi: Yün

a tool for gripping and turning or twisting the head of a bolt, a nut, a pipe, or the like, commonly consisting of a bar of metal with fixed or adjustable jaws.
Türkçesi: İngiliz anahtarı

a sweatband worn on the wrist to absorb perspiration.
Türkçesi: Bileklik