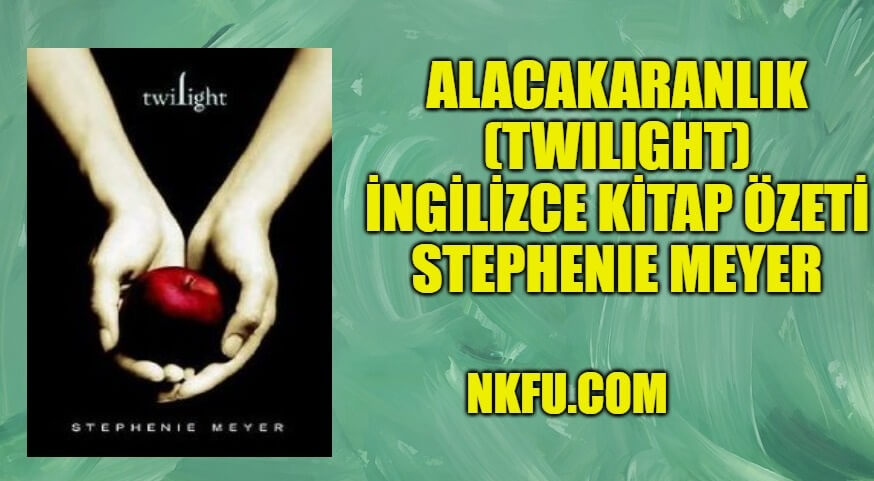 Alacakaranlık (Twilight); At seventeen, Bella Swan has to leave her mother and her home in Phoenix, Arizona and move to Forks, Washington to live with her police chief father, because her mother has remarried. Her first day in her new high school, Bella meets a number of friendly boys and girls—and the Cullens, a family of adopted teenagers, all of them intensely beautiful young people.

Edward Cullen, reacts to Bella intensely. He seems to hate her on sight, and tries to get transferred out of the class they share. The next day Edward is not in school, and Bella asks her father about the Cullens. He explains that people judge them because they are new to town, rich, and attractive.

A few days later, it snows.Edward Cullen is back in school, and introduces himself to Bella. They work together as lab partners in biology, and talk. The next morning the snow has all frozen. When Bella gets out of her truck in the school parking lot, a van is skidding toward her. Suddenly Edward Cullen is there. He stops the van with his bare hands to rescue her. The accident puts Bella at the center of attention at school, and the power with which Edward moved cues her that something is different about him.

She fixates on figuring out what it is.

As Bella and Edward spend time together, she begins to share her theories with Edward about what he is, starting with superhero fantasies. When they test their blood types in biology class, Bella faints, and Edward rescues her again, driving her home. That weekend Bella goes to a nearby beach with her friends. Some kids from the nearby Indian reservation come along, and one of them, Jacob Black, tells Bella the stories the Indians tell about the Cullens: they are the “cold ones,” or vampires.

Bella researches vampires, but finds confusing and conflicting information. To take her mind of Edward, she agrees to go with some of the other girls to Port Angeles, to help them choose dresses for an upcoming dance. Bella goes for a walk alone, and wanders into a rough area of town. A group of men are about to attack her when Edward appears and pulls her into his car. He takes her out to dinner, and shares some specifics about himself: he is telepathic, that wanted to kill the men who threatened her, and that he and his family are vampires who kill animals so they do not have to kill humans—but they always want to drink human blood. Bella is so drawn to him that she does not care.