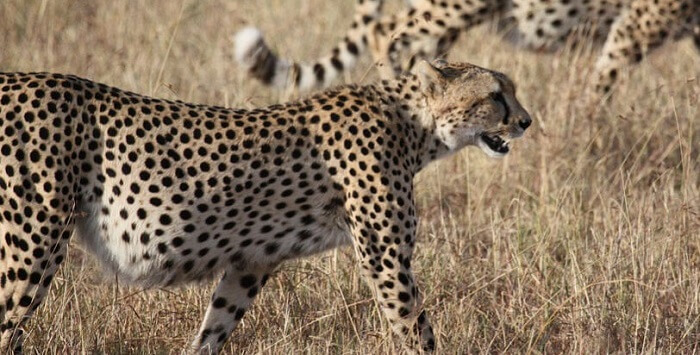 Fastest mammal on land, the cheetah can reach speeds of 60 or perhaps even 70 miles (97 or 113 kilometers) an hour over short distances. It usually chases its prey at only about half that speed, however. After a chase, a cheetah needs half an hour to catch its breath before it can eat.

The cheetah’s excellent eyesight helps it find prey during the day. The cheetah is hard to see because its spotted coat blends with the tall, dry grass of the plains. Suddenly, the cheetah makes a lightning dash. It knocks its prey to the ground and then bites its throat. Once found throughout Asia and Africa, cheetahs today are racing toward extinction. Loss of habitat and declining numbers of their prey combine to threaten the future of these cats. Cheetahs live and hunt mainly in open grasslands and bushy areas in parts of Africa and the Middle East.