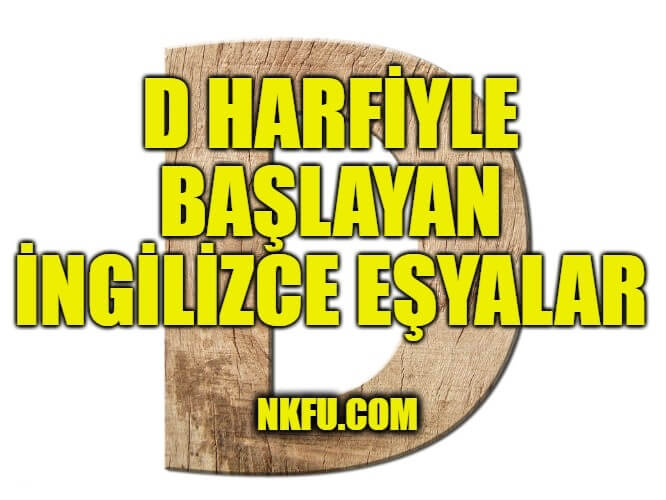 a short weapon with a sharp point that is used for stabbing, or something that hurts someone like a weapon.
Türkçesi: Hançer

a dart is a small pointed missile with feathers at the rear which is used in target practice, or a quick movement.
Türkçesi: dart oyunu

a decorative glass bottle, generally with a stopper, from which wine, etc. is served after being decanted
Türkçesi: sürahi

A heated vessel for frying food by immersing in hot oil, as opposed to shallow frying in a frying pan.
Türkçesi: Fritöz

a large apparatus for lifting and moving heavy objects: it consists of a long beam pivoted at the base of a vertical, stationary beam and moved by ropes running on pulleys
Türkçesi: vinç

a piece of furniture equipped with drawers, compartments, etc., and a flat or sloping top for writing, drawing, or reading
Türkçesi: sıra

a colorless, very hard, crystalline mineral made of pure carbon, or a figure with four equal sides with small angles on the top and bottom and wider angles on the sides.
Türkçesi: elmas

a soft, absorbent cloth folded and arranged between the legs and around the waist of a baby to absorb and contain excretion
Türkçesi: bebek bezi

small cubes that have different things written on each side of the cube (usually numbers from 1-6), or games played with this small cube, or small cubes of food.
Türkçesi: zar

a brief garment worn beneath a jacket, dress, etc. and designed to resemble the collar and front of a shirt, blouse, or sweater
Türkçesi: papyon

A tool or machine used for digging or excavating.
Türkçesi: Kazma

A perforated rack on which washed dishes, etc. may be placed in order to dry.
Türkçesi: Bulaşıklık

The definition of a doll is a toy or puppet that looks like a human
Türkçesi: oyuncak bebek

a movable structure used for opening and closing an entrance or for giving access to something.
Türkçesi: kapı

a machine for excavating
Türkçesi: Vargel

a sliding storage box in a table, bureau, chest, etc., that can be drawn out and then pushed back into place
Türkçesi: Çekmece

a one-piece garment consisting of a top and skirt that is usually worn by a woman.
Türkçesi: elbise

A chest of drawers often supporting a mirror and typically used for holding clothes and personal items.
Türkçesi: Şifoniyer

A robe worn for lounging or before dressing.
Türkçesi: Sabahlık

The definition of a drill is a tool for creating holes, or a training exercise.
Türkçesi: matkap

thing that drops or a tube with a small opening at one end and a rubber bulb at the other used to measure liquid in drops.
Türkçesi: damlalık

a drum is a round metal or hollow wooden instrument with a flexible material stretched over it that is played by hitting with sticks or hands.
Türkçesi: Bateri

An appliance that removes moisture by heating or another process
Türkçesi: kurutucu

A flat scoop with a short handle, into which dust is conveyed with a brush or broom.
Türkçesi: faraş

a duvet is a soft quilt filled with feathers, down or synthetic materials that has a cover and is used instead of a comforter on a bed.
Türkçesi: yorgan

The definition of a DVD, which stands for digital video disc, is an optical disc that can store large quantities of digital material such as sound, images and data.
Türkçesi: DVD

Dynamite is defined as a chemical explosive in stick form.
Türkçesi: dinamit