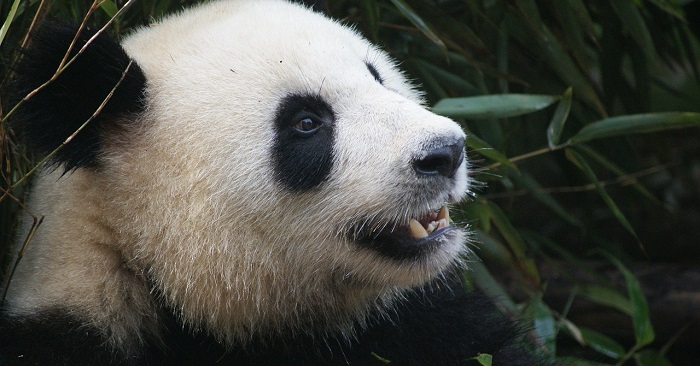 High in dense bamboo forests in the misty, rainy mountains of southwestern China lives one of the world’s rarest mammals: the giant panda, also called the panda. Only about 1,000 of these black-and-white relatives of bears survive in the wild.

Pandas eat almost nothing but bamboo shoots and leaves. Occasionally they eat other vegetation, fish, or small animals, but bamboo accounts for 99 percent of their diets. Pandas eat fast, they eat a lot, and they spend about 12 hours a day doing it. The reason: They digest only about a fifth of what they eat. Overall, bamboo is not very nutritious. To stay healthy, they have to eat a lot—up to 15 percent of their body weight in 12 hours—so they eat fast.

Pandas’ molars are very broad and flat. The shape of these teeth helps the animals crush the bamboo shoots, leaves, and stems they eat. To get the bamboo to their mouths, they hold the stems with their front paws, which have enlarged wrist bones that act as thumbs for gripping. A panda should have at least two bamboo species where it lives, or it will starve.

Pandas are shy; they don’t venture into areas where people live. This restricts pandas to very limited areas.