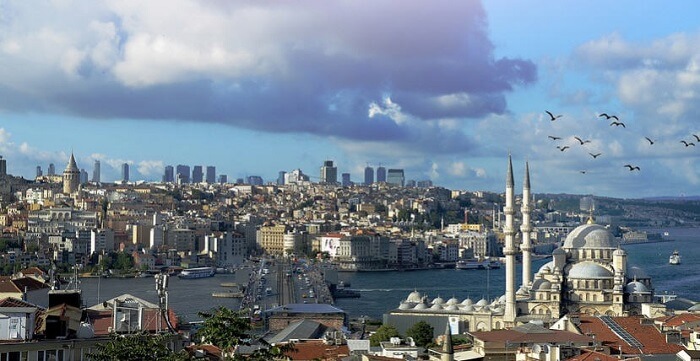 ISTANBUL. By far the largest city in Turkey, and its chief port and centre of trade, is Istanbul, formerly known as Constantinople. It is beautiful as well as important, for it lies on the shores of the Bosporus, which divides Europe from Asia, and southwards it looks on the inland Sea of Marmara. Few cities anywhere have such a noble setting.

Originally the place was a Greek town called Byzantium. In a.d. 328, the Roman Emperor Constantine chose it as the new capital of his empire, naming it New Rome because, like Rome, it stood on seven hills. In 330 he called it Constantinople. The Turks conquered the eastern Roman Empire in 1453 and renamed the city Istanbul—a name obtained from Greek words meaning “into the city”. However, the name Constantinople continued to be used by western countries until 1923, when the capital of Turkey was moved to Ankara in Asia Minor.

At the southern end of the Bosporus a long inlet called the Golden Horn runs inland on the European side. The Golden Horn, which forms a splendid harbour, divides the old part of the city from the new. Old Istanbul stands on the promontory to the south of the Golden Horn, and contains many mosques whose great domes and tall slender towers called minarets stand out against the skyline.

The Sultan Ahmed mosque is the finest of these.

There is also the magnificent building of St. Sophia, once a great Christian church, later a mosque and now a museum, and the Seraglio which was once the palace of the sultans, who were not only the rulers of Turkey but also the heads of the Islamic religion. On the shore is the railway station linking Istanbul with Bucharest, Vienna and Paris. Passengers for Ankara and beyond must cross the Bosporus in a ferry to Haydarpaşa.

Bridges across the Golden Horn lead from the old city to the high promontory of Galata and Beyoğlu (formerly Pera), where the main business and shopping centres and hotels are situated. On the Asiatic shore is Scutari, where Florence Nightingale nursed the sick and wounded soldiers in the Crimean War. South of Scutari is Haydarpaşa, the terminus of the railway into Asia.

Higher up the Bosporus on both shores lie many suburbs of Istanbul, with ancient houses, modern villas, castles, cafés and mosques set above the water in hilly wooded country. In spring, when the wistarias and lilacs and horse chestnuts come into flower, the scene is one of great beauty. A feature of Istanbul is the busy life afloat, for besides the many big ships from all parts of the world. There are passenger steamers to the coastal towns of Turkey, ferries running across the Bosporus and to the popular seaside resorts in the Princes’ Island near by and hundreds of small craft and boats.