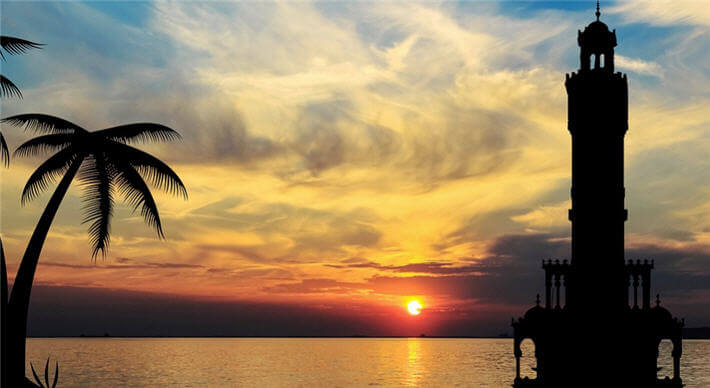 İzmir; is Turkey’s second-largest port (after Istanbul) and the capital of İzmir province. Also known as Smyrna, the city is situated Aegean Sea at the eastern extremity of the Gulf of İzmir. The expanding city ascends the gentitle slopes that encircle it. Its sheltered harbor, its easy access to the hinterlands, and the air and rail communications serving the city have all combined to make İzmir one of the most active and prosperous of Turkey’s cities. The provience of İzmir is one of the richest agricultural regions of Turkey. Its fruits, tobacco, cereals, other produce are among the country’s most important exports.

The site of İzmir has been settled since the 3rd millennium b. c., but it entered into recorded history with the colonies established there by the and the Aeolians and the Ionians in the 11th century b.c. Often distroyed by earthquakes as well as by enemies, the city was rebuilt by the successors of Alexander the Great at the beginning of the 3rd century b.c., and it continued to flourish after it came under Roman rule in 27 b. c. Although by the Arabs in the course of the Arab conquests of the 7th century a. d., it was not Seljuk invasion in 1076 that it first fell into the possession of a Muslim power. It hands many times among the Turks, Byzantines, Genoese, and Knights of Rhodes until 1924, when it was finally incorporated into the Ottoman state.

Under Ottoman rule, İzmir regained its forer prominence, and virtually every important mercantile power had consuls and merchants resident there. The non-Muslim population became as large as the Turkish. After Turkey’s defeat in World War I, Greece attempted to annex the province, but after some initial successes the venture ended in disaster for the Greek army, which was driven back into the sea. During the fighting the whole of seaside İzmir was destroyed by fire (Sept. 9, 1922).