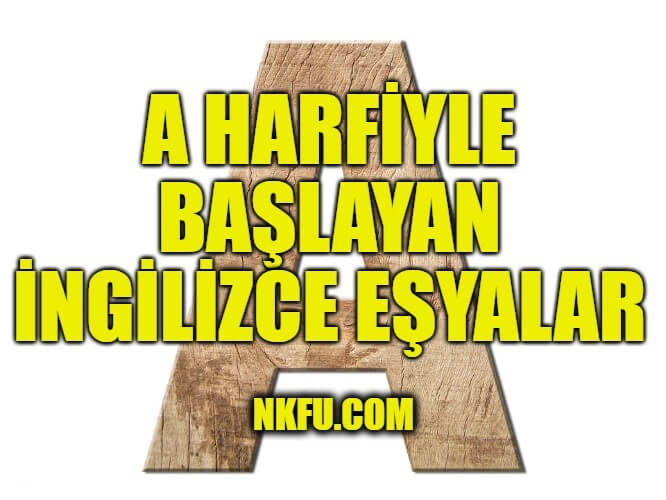 a simple device you can use to make manual mathematical calculations by sliding counters along rows of wires set inside a frame.
Türkçesi: abaküs

an accessory is something that you add on just to increase the beauty or functionality of something else.
Türkçesi:aksesuar

a connecting device for parts that would not otherwise fit together
Türkçesi:Adaptör

An axlike tool with a curved blade at right angles to the handle, used for shaping wood.
Türkçesi:keser

An apparatus for controlling, especially lowering, the temperature and humidity of an enclosed space.
Türkçesi:Klima

an aircraft is a vehicle used for traveling through the air
Türkçesi:uçak

an airplane is a type of aircraft that is characterized by being heavier than air, driven by propellers and jets and having wings which keep it in the air.
Türkçesi:uçak

A book with blank pages for the insertion and preservation of collections, as of stamps or photographs.
Türkçesi:albüm

A device that is used to increase the magnitude of an information-carrying signal.
Türkçesi:Amplifikatör

an amulet is something that is worn or kept, typically as a necklace, to magically keep bad things away from you or to bring good things to you.
Türkçesi:Nazar boncuğu

an anchor is a weight dropped into the water to stop the movement of a boat or other floating object.
Türkçesi:çapa

One of a pair of metal supports used for holding up logs in a fireplace.
Türkçesi:ocak ayaklığı

an antenna is a wire that receives and conducts electromagnetic waves, typically to transmit information.
Türkçesi:Anten

An anvil is defined as a block made of iron and used as a surface on which to hammer heated metals into desired shapes.
Türkçesi:Örs

an apron is something that is worn to protect the front part of the body or to keep clothes from getting soiled.
Türkçesi:önlük

a chest or coffer
Türkçesi:sandık

An armchair is defined as a chair that has supports on the sides so a person sitting in it can rest his arms.
Türkçesi:koltuk

An arrow is defined as a slender, straight weapon, generally with feathers attached to the end, that is shot from a bow.
Türkçesi:ok

A receptacle for tobacco ashes and cigarette and cigar butts.
Türkçesi:Kültablası

an aspirator is a tool that uses suction to remove or collect something, particularly in medicine for removal of fluids.
Türkçesi:aspiratör

an instrument formerly used to find the altitude of a star, etc.: it was replaced by the sextant
Türkçesi:Usturlap

a book of maps or some type of information that includes pictures and/or tables and charts.
Türkçesi:Atlas

an automobile is a means of transportation that usually has wheels and an engine.
Türkçesi:otomobil

The definition of an ax is a tool with a blade on a handle used for cutting.
Türkçesi:Balta

a rod on which a wheel turns, or one connected to a wheel so that they turn together
Türkçesi:aks