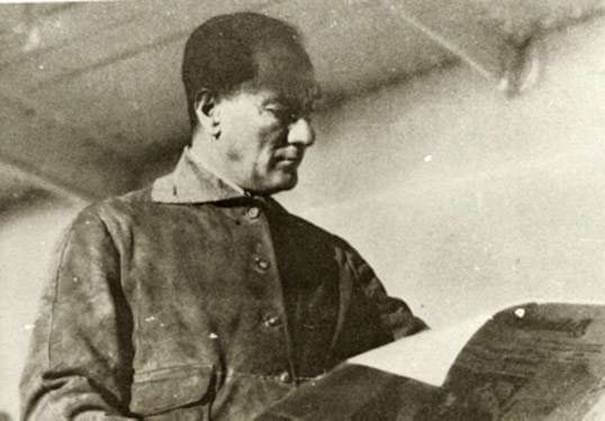 If they ask who it is
Who stretches his arms over us night and day,
Who shows us the loveliest of days,
Who breathes new life into the Turkish nation,
It is Ataturk.

Whatever meets the eye,
The dawns that illuminate our country,
The weapons that terrify our enemies,
The shipyards, factories and merchants’ counters,
It is Ataturk.

Wherever one looks,
He appears divine in all places,
On the land, in the sea, in the sky,
The heart worships and is transported with joy,
It is Ataturk.

Turkish women teach their sons his name
Before those of their own fathers.
He taught us to take pleasure in living.
We are happy if he is happy.
It is Ataturk.
(Faruk Nafız ÇAMLIBEL)

The army he built
Threw back the enemy,
It is he
Who created the nation and the land.

His aim
Is the Turk’s desire,
His great heart
A homeland for the Turk.

With his soul
He gave us this country and
The republic
As a gift to us.

You are our father,
We take our name from you.
He who believes in you
Follows in your footsteps.

In the beginning I spoke the name of Ataturk
And did up my buttons.

How shall I say he is dead?
My Ataturk is before

me,
He lies asleep in the snow,
His fur cap on his head.

How shall I say he is dead?
My Ataturk walks to Kocatepe,
Lost in though, musing,
His hand on his chin.

He has set out,
He is walking among the crowds,
His new hat on his head.

How shall I say he is dead?How?
A ray of light has struck his face,
My Ataturk is looking on.
Let us make ourselves presentable.
İlhan DEMİRASLAN

The hero set foot in Samsun today,
Meadows and pastures turned green on the path of victory.
Feasting starts to the sound of drums and flutes,
My heart jumps and sings on a branch of spring.

Offer poppies to the dream of Ataturk,
Lovely roses from the garden of labour.
We are in an endless morning … let him sleep,
Our joy makes his heart rejoice.

That song of victory set out from Samsun
Like a plough, from mountain to mountain,
Rearing up it raised the flag to the old post,
A fresh spring opened the eyes of the nation.

My red flag waves free in Ankara Castle,
Waving towards a golden age,
New heroes walk arm in arm
To the flag on those snowy mountains.

A garland for the free leader of May 19,
The season of cherries, the month of youth and roses.
Hearts are full of colour in a spring garden,
Look at that endless race all over the meadows.
Ceyhun Atıf KANSU

I Am Thinking of Mustafa Kemal

I am thinking of Mustafa Kemal:
On a bay horse with a mane of flame
He passes the high mountains, the deep seas.
His gold hair waves in the wind,
His blue eyes burning bright.

I am thinking of Mustafa Kemal:
In the burnt, ravaged fields of war
He creates epics such as the world has never seen,
Great armies follow him,
Each soldier like Mustafa Kemal.

I am thinking of Mustafa Kemal:
Worth all the heroes of history
He rules the boundless skies,
A naked sword on a bay horse
He goes from victory to victory.

I am thinking of Mustafa Kemal:
He did not die one November morning!
He is still with us ,everywhere;
He lives in all parts of the land
In the veins of our hearts.

I am thinking of Mustafa Kemal:
His gold hair waves in the wind,
I see his blue eyes shining bright.
He enters my dreams at night.
I kiss his hands.
Ümit Yaşar OĞUZCAN

Of course the stars in the sky,
The sand in the sea will fade away
This country, this land is generous.
I am a sacred flame that will never die
Believe me, Mustafa Kemals will never end.

On the road to brotherhood and plenty
In the light of the creativity of knowledge
I am in the finest thoughts
In new, universal discoveries
I have done away with backwardness, it will not come back
Believe me, Mustafa Kemals will never end.

If you have woes, remember me
Feel me in your worst moments
Let not this country weep
In November,
The Conquerors, the Magnificents never die.
Believe me, Mustafa Kemal will never end.
Halim YAĞCIOĞLU

You took us by the hand and we set out,
We liberated the nation, the motherland, my Ataturk.
We spread blind fortune, as they say, over the land,
Glory is the blessing of war, my Ataturk.

The mountains were like horses beneath us.
You cried, ‘Awake, Oh, Turk!’ My eyes were opened,
My face was washed in the waters of the Sakarya.
The value of the Turk was known, my Ataturk.

I hear the waves beating on the shore,
You would still have won our hearts
Had you been merely a general,
But you are the crown of this nation, my Ataturk.

Has there ever been your equal in bravery?
We did well to call you ‘Father,’
Your love is in our hearts, our fingers on the trigger.
You were the protection of God for us, my Ataturk.

Every Turk burns with the name of his ‘Father,’
Hears your command and resolves all other concerns.
This one consolation is enough for him,
The aim of being worthy of you, my Ataturk.
Osman ATİLLA

THE TENTH OF NOVEMBER

Unreal, no more than a dream to gainsay,
That five minutes past nine Atatürk passed away,
Never such multitudes mourning as today,
With all creatures alive we are weeping,

He, most of all, had served this nation,
With a love that had power to move a mountain,
Borne now on the shoulders of the population,
Our father, on Ankara’s slopes forever sleeping.
CAHİT SITKI TARANCI