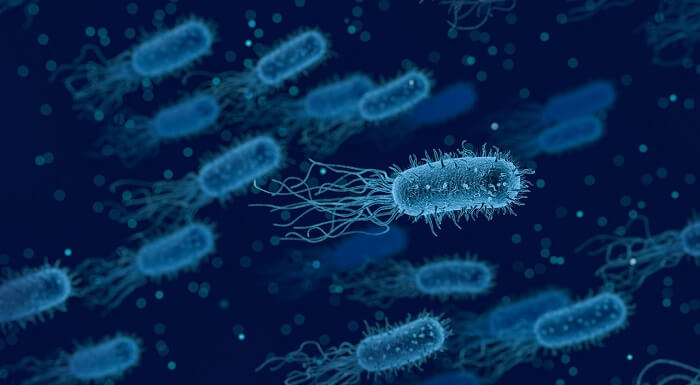 Bacteria are very small organisms. Almost all bacteria are so tiny they can only be seen through a microscope. Bacteria are made up of one cell, so they are a kind of unicellular organism. They are among the simplest single-celled organisms on Earth, and were one of the earliest forms of life. They include a number of extremophiles who live in extreme habitats.

There are probably more individual bacteria than any other sort of organism on the planet. Most bacteria live in the ground or in water, but many live inside or on the skin of other organisms, including humans. There are about ten times as many bacterial cells as human cells in each of our bodies. Some bacteria can cause diseases, but others help us in everyday activities like digesting food (gut flora). Some even work for us in factories, producing cheese and yogurt. 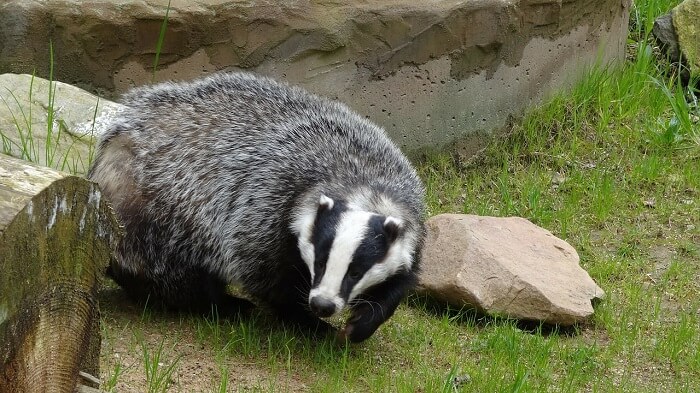 Badgers measure 520 to 875 mm from head to tail, with the tail making up only 100 to 155 mm of this length. They weigh 4 to 12 kg. The body is flattened, and the legs are short and stocky. The fur on the back and flanks of the animal ranges from greyish to reddish. The underside is a buff colour. The throat and chin are whitish, and the face has black patches with a white central stripe, which extends back over the head from the nose. In northern populations, this stripe ends near the shoulders, but in southern populations it continues along the back to the rump. Males are significantly larger than females, and animals from northern populations are larger than those from southern populations. 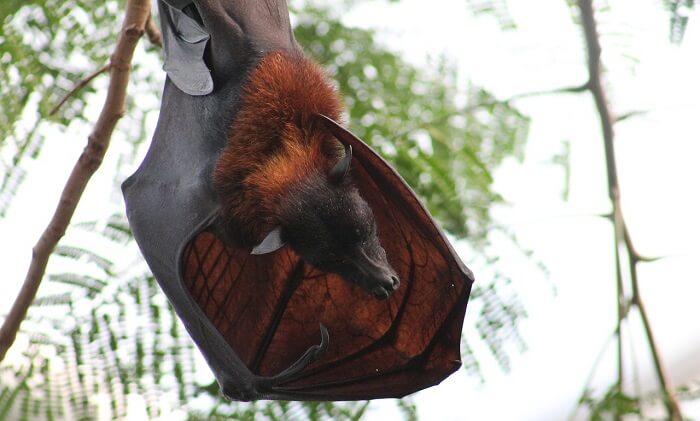 Bats are mammals in the order Chiroptera. They are the only mammals that can fly. Other mammals like flying squirrels, or flying possum, can glide but not fly. Bats are nocturnal – they are active during the night, dusk, or dawn. Most use echolocation to catch prey and to find their way about. As nighttime animals, bats avoid direct competition with birds, few of which are nocturnal.

Bats are a successful group. They are the second largest order of mammals: there are more than 1,100 species of bats. This means that 20% of all living mammal species – one in five – are bats.Megabats eat fruit, nectar or pollen. They pollinate flowers and sometimes spread their seeds. Many tropical plants completely depend on bats.

Most microbats (7 out of 10 bat species) are insectivorous, that is, they eat insects. Some microbats eat small vertebrate animals (small mammals or fish), blood, or even other bats. There are only a few species of vampire bats, which eat blood from cattle. 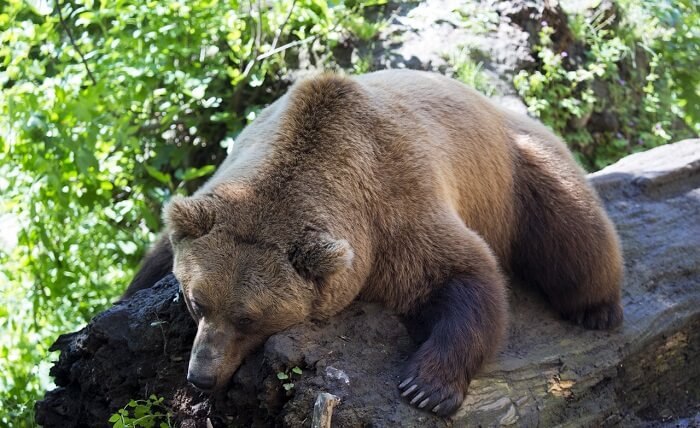 Bears are a group of large mammals. They form the family Ursidae, in the suborder Caniformia of the order Carnivora. There are 9 living bear species.

Bears usually have a big body with short and thick legs. They only have a very short tail. They have small eyes and round ears. They usually have longer, shaggy fur. On each foot they have five claws, which they cannot pull back. They have very good senses of smell and hearing. They can stand up on their back legs. Usually bears can climb and swim very well. 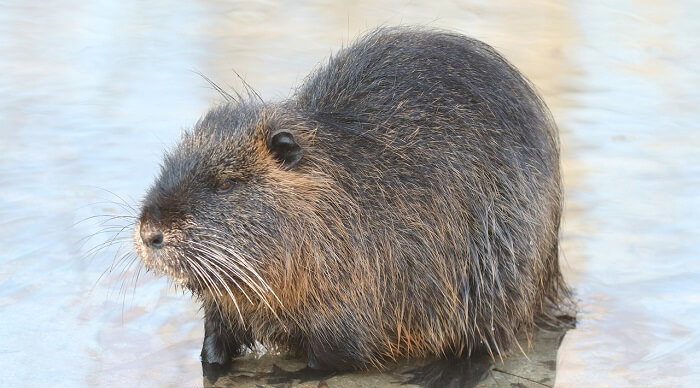 A beaver is a kind of rodent. It is semi-aquatic, meaning some of the time it lives in water, some of the time it lives on land. Beavers can only be found in North America and Europe. In Europe, they almost became extinct (died off), but they are returning. There are beavers living in the Elbe and Rhone rivers, as well as in Bavaria, Poland and Scandinavia. Beavers are known for building and keeping dams in rivers. 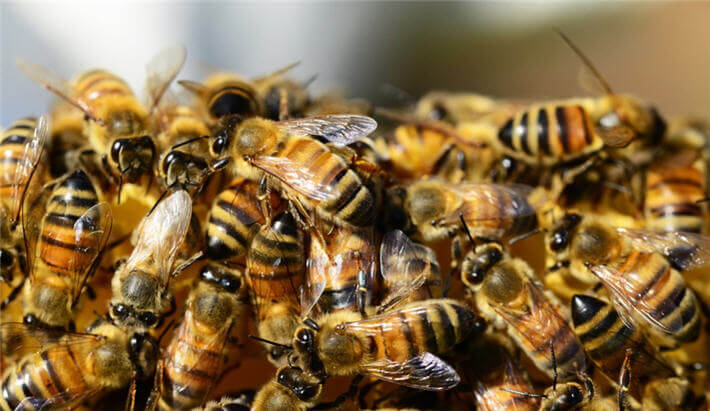 Bees are flying insects of the Order Hymenoptera, which also includes ants, wasps and sawflies. There are about 20,000 species of bees. Bees collect pollen from flowers. Bees can be found on all continents except Antarctica.

Honeybees, including the Africanized honeybee

Like other insects, the body of a bee can be divided into three parts: the head, thorax (the middle part), and abdomen (the back part). Also like other insects, bees have three pairs of legs and two pairs of wings. Many bees are hairy and have yellow and black or orange and black warning colors. 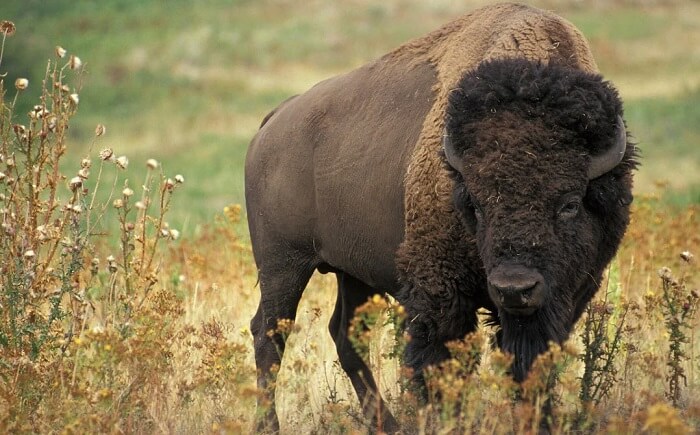 Bison are a type of even-toed ungulate bovines. They are the biggest mammals in North America.

Bison live in river valleys, and on prairies and plains. Typical habitat is open or semi-open grassland, as well as sagebrush, semi-arid lands and scrublands. Some lightly wooded areas were known to have supported bison. Bison will also graze in hilly or mountainous areas where the slopes are not steep. Though not particularly known as high altitude animals, bison in the Yellowstone Park are frequently found at elevations above 8,000 feet and the Henry Mountains bison herd is found on the plains around the Henry Mountains, Utah, as well as in mountain valleys of the Henry Mountains to an altitude of 10,000 feet. 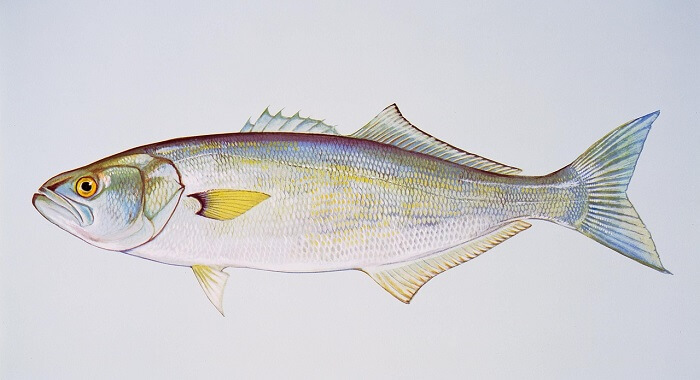 Bluefish is a kind of fish which occurs in the Atlantic Ocean, the Mediterranean, the Black Sea, the Indian Ocean and the Pacific. It is a pelagic fish, which means that it lives near the surface of the ocean. They can grow to a size of 150 centimetres (59 in) and reach a weight of 15 kilograms (33 lb). In the wild, they live to be about nine years old.

Bluefish are predators: they hunt other fish, in small groups. Bluefish are caught commercially, and there is a problem with overfishing. Sometimes another species, Rock salmon or Coal fish is erroneously called Bluefish. 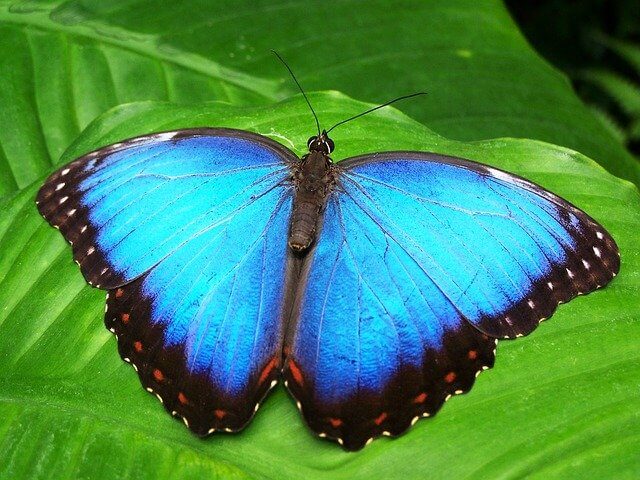 A butterfly is a usually day-flying insect of the order Lepidoptera. They are grouped together in the suborder Rhopalocera. Butterflies are closely related to moths, from which they evolved.

The life of butterflies is closely connected to flowering plants, which their larvae (caterpillars) feed on, and their adults feed and lay their eggs on. They have a long-lasting history of co-evolution with flowering plants. Many of the details of plant anatomy are related to their pollinators, and vice versa. The other notable features of butterflies are their extraordinary range of colours and patterns, and their wings. These are discussed below.