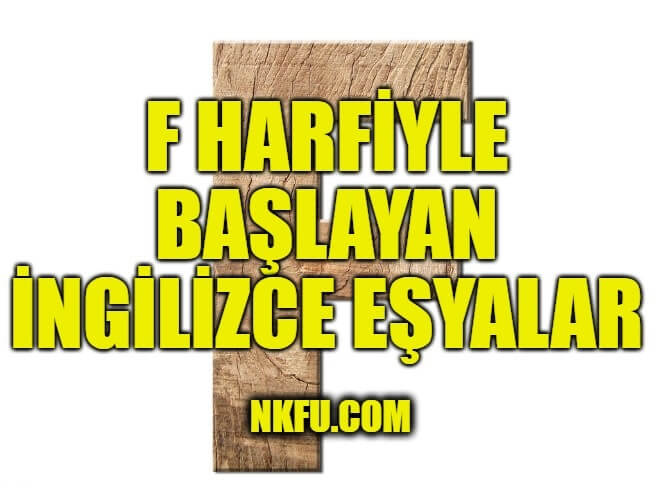 any device or machine used to set up a current of air for ventilating or cooling
Türkçesi: Vantilatör, yelpaze

A device that sends and receives printed pages or images over telephone lines by digitizing the material with an internal optical scanner and transmitting the information as electronic signals.
Türkçesi: Faks

a fabric made of animal fibers that have been twisted and pressed together.
Türkçesi: keçe

a boat that carries people, cars and other things across a body of water.
Türkçesi: Feribot

a felt cap, usually of a red color, having the shape of a truncated cone, and ornamented with a long black tassel, worn by men in Egypt and North Africa
Türkçesi: Fes

an stringed musical instrument that is played with a bow, such as a violin.
Türkçesi: keman

a filter is something that separates solids from liquids, or eliminates impurities, or allows only certain things to pass through.
Türkçesi: Filtre

a motor truck with a special pumping apparatus for spraying water, chemicals, etc. on fires to put them out
Türkçesi: itfaiye arabası

An open recess for holding a fire at the base of a chimney.
Türkçesi: Şömine

A rod of wood, steel, or fiberglass used with a line for catching fish
Türkçesi: Olta

The definition of a flag is a piece of fabric attached to a pole usually with symbolic colors or patterns.
Türkçesi: bayrak

Underclothing made of this cloth.
Türkçesi: Fanila

The definition of a flint is a piece of chert, a form of quartz, that will spark when struck with steel and can be used to start a fire.
Türkçesi: çakmaktaşı

a glass tube coated on the inside with a fluorescent substance that gives off a bright light (fluorescent light) when a vapor, usually mercury vapor, in the tube is acted upon by a stream of electrons from the cathode
Türkçesi: Floresan lamba

a flute is a long tube-shaped wind instrument that makes a high pitched sound by blowing across a hole.
Türkçesi: flüt

foundation is the skin colored makeup used as a base on the face before other makeup is applied.
Türkçesi: Fondoten

A low stool for supporting the feet.
Türkçesi: Ayak iskemlesi

a tool with a handle and two or more prongs at the end or a division into two branches
Türkçesi: çatal

A structure, often decorative, from which a jet or stream of water issues.
Türkçesi: Fıskiye

A thermally insulated compartment, cabinet, or room in which a subfreezing temperature is maintained for the rapid freezing and storing of perishable items, especially food.
Türkçesi: Buzluk

a plastic, saucer-shaped disk sailed back and forth between players in a simple game
Türkçesi: Frizbi

a funnel is a cone-shaped utensil with openings at the base and the tip.
Türkçesi: huni