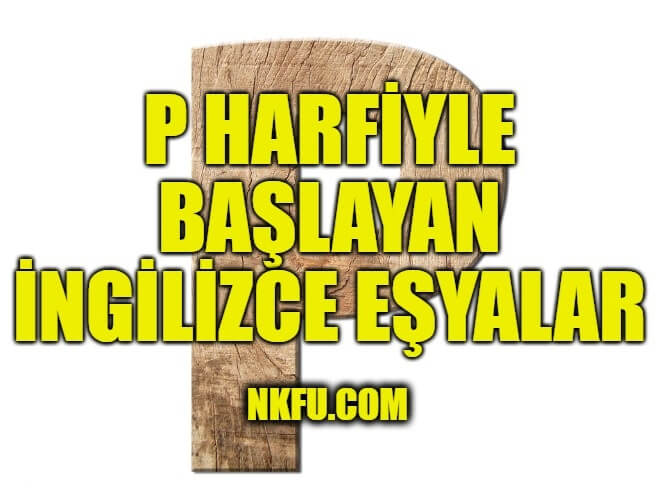 a container, as a box or case, in which something is or may be packed.
Türkçesi: Paket

a short, flat bladed oar for propelling and steering a canoe or small boat, usually held by both hands and moved more or less through a vertical arc.
Türkçesi: kısa kürek

a portable or detachable lock with a pivoted or sliding shackle that can be passed through a link, ring, staple, or the like.
Türkçesi: asma kilit

a substance composed of solid coloring matter suspended in a liquid medium and applied as a protective or decorative coating to various surfaces, or to canvas or other materials in producing a work of art
Türkçesi: Boya

a thin and usually oval or oblong board or tablet with a thumb hole at one end, used by painters for holding and mixing colors.
Türkçesi: palet

Pants are trousers or clothing that you wear to cover your legs and bottom.
Türkçesi: pantolon

The definition of a parachute is a cloth device that is used to slow the fall of a person or thing, especially from an airplane.
Türkçesi: paraşüt

An official document issued by a government identifying a citizen, certifying his or her nationality, and formally requesting admittance and safe passage from foreign countries.
Türkçesi: Pasaport

The definition of a pen is a small yard or animal enclosure, or an tool used to draw or write with ink.
Türkçesi: tükenmez kalem

The definition of a pencil is a narrow tube-shaped instrument filled with graphite or colored wax that is used for writing and drawing.
Türkçesi: kalem

a light, four-wheeled carriage of the 19th cent. drawn by one or two horses, with front and back seats and, usually, a folding top for the front
Türkçesi: Fayton

Phone is short for telephone, meaning the instrument used to call others.
Türkçesi: Telefon

The definition of a photo is an image that is taken by camera.
Türkçesi: Fotoğraf

The definition of a photograph is an image generally taken with a cam
Türkçesi: fotoğraf

An instrument for measuring a property of light, especially luminous intensity or flux.
Türkçesi: Fotometre

The definition of a piano is a large keyboard instrument with keys that strike wires which are stretched a metal frame inside a wooden case, or a piece of music that is written to be performed with a soft volume.
Türkçesi: piyano

The definition of a pillow is a cushion or cloth container stuffed with something soft used for comfort and support.
Türkçesi: yastık

a gripping tool consisting of two pivoted limbs forming a pair of jaws and a pair of handles
Türkçesi: kerpeten

a small wheel with variously colored vanes of paper, plastic, etc., pinned to a stick so as to revolve in the wind
Türkçesi: fırıldak

a hollow cylinder used to move liquids, gases or oil, or a tool for smoking, or a wind instrument where air vibrates to produce a sound.
Türkçesi: Boru

a slender pipe or tube into which small amounts of liquids are taken up by suction, as for measuring
Türkçesi: pipet

a sliding valve that is snugly fitted into a cylinder in an engine and which moves up and down because of pressure, or a sliding valve in the cylinder of a brass instrument.
Türkçesi: piston

a container for liquids or the person who throws the ball to the batter in baseball and softball.
Türkçesi: Sürahi

a thin, flat and smooth sheet of something.
Türkçesi: Tabak

a machine or tool used to cut or turn over the soil or to move dirt or snow.
Türkçesi: Pulluk

A plug is defined as the end piece of a cord for an electrical device with prongs that fit into a wall socket.
Türkçesi: Tıpa

A small knife with blades or a blade that can fold into the handle when not in use.
Türkçesi: çakı

a cloak like a blanket with a hole in the middle for the head, worn in Spanish America
Türkçesi: panço

a card, usually with a picture on one side, that may be sent through the mail when a stamp is affixed, used to send short messages
Türkçesi: kartpostal

a round vessel of any size, made as of metal, earthenware, or glass, used for holding liquids, cooking or preserving food, etc.
Türkçesi: pot

A small rug used by Muslims to kneel and prostrate themselves upon during devotions.
Türkçesi: Namazlık

A device for projecting a beam of light.
Türkçesi: projektör

A device for propelling an aircraft or boat, consisting of a spinning shaft with radiating angled blades that thrust air or water in the direction opposite the desired direction of travel.
Türkçesi: Pervane

an instrument in the form of a graduated semicircle, used for plotting and measuring angles
Türkçesi: iletki

a device used for making holes or stamping, or a hard hit with the fist.
Türkçesi: Zımba

a small, often jointed figure, as of a human being or animal, typically designed to be manipulated, as from within by the fingers of a hand or by strings held from above
Türkçesi: kukla

a small bag or pouch to carry money, or a sum of prize money.
Türkçesi: çanta