Somewhere far away on the sea surface the water was beautiful, clear, blue but very deep. However deep or far away may the surface be it does not mean there is only sand below.

The sea hides over there magical trees, herbs, fishes that are big and small. The spot where the sea is the deepest you can find a magnificent castle where the king of the underwater world lives. The walls are covered with corals and the roof is made out of seashells that open and close how the current flows. 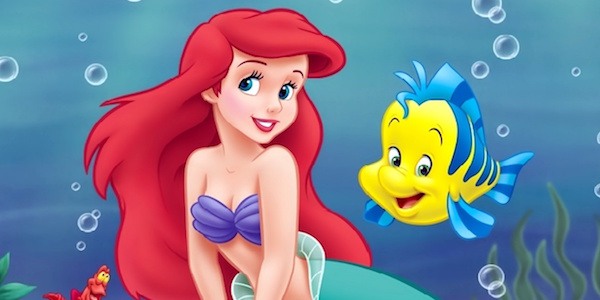 The king was a widower for a long time so his mother helped him run the castle. She was a smart woman, proud of her inheritance.

She loved her granddaughters above all and she had 6 of them.

She loved her granddaughters above all and she had 6 of them. The youngest one was the prettiest one. She had beautiful skin and blue eyes. They spent most of their time in the garden where they had their special place and the youngest one circled her so that it would remind her of the sun.

The little mermaid was an unordinary girl

The little mermaid was an unordinary girl that was shy, unlike her sisters, and she loved a marble statue of a boy that sunk to the bottom after a shipwreck. The princess planted a plant near the statue and it complimented it perfectly.

The biggest joy for her were the news that came from the world on the surface, the news about people. Her grandma always told her stories about people their habits, ships and cities. The little mermaid found the flowers that smelled, the green trees and the birds most interesting.

Their grandma promised them that they will be able to come out to the surface and observe the ships from a rock. They always told stories about what they saw to one another. Nobody wanted to get to know the outer world more than the youngest. The first one told how she lied on the sand and the other one how she saw the sunset.

The third sister was brave and she started swimming near by the river and saw beautiful castles and hills. The fourth one wasn’t all that brave and the fifth one want out during the winter so she saw the world from an iceberg.

When the little mermaid turned 15 she could finally enjoy the fresh air. She observed a ship that hosted a party. She saw a young man with big black eyes. The party was for his birthday.

The time passed by and the Little Mermaid observed the party until a storm came by. The waves were getting bigger and bigger and people were panicking. Unfortunately the prince fell into the sea and The Little Mermaid rushed to save him so he wouldn’t drown.

She got him to land, and placed him near a church where she kissed him and rushed to the sea because somebody was coming. Soon he was surrounded by beautiful girls and he did not know who saved him. He smiled to all of them and that made the Little Mermaid sad. She got sadder as the days passed by and soon she told her sisters everything. They helped her find the prince so she could observe him every day.

She was getting attracted to the human life

She was getting attracted to the human life and even though her grandma tried to explain that her undersea life is amazing she craved the land. She decided to search for help at an old witch’s house that was guarded by snakes. Even though she was afraid she kept on going with her plan.

The witch spoke to the Mermaid and told her she came in the right time because she has the potion for her. Unfortunately the witch did not work for free. Mermaid would get her legs but with every step she’ll take she will feel an enormous pain and she has to convince the prince that she is the one for him because if she fails she will turn into foam. Also the witch wanted her voice that was the prettiest in the whole undersea world. The little Mermaid agreed and lost her voice.

After she came to land she drank the potion and she felt a lot of pain, passed out and after she woke up the prince was next to her. The problem was she couldn’t introduce herself to him. He helped her get up and took her to the castle where she got the prettiest dresses. Every day they were entertained by some girls but neither one of them had a pretty voice as The little Mermaid.

One night she saw her sisters and she talked to them. They were really sad that she left them and in the distance she saw her grandma and dad. The prince loved her more and more every day but not as a future wife but as a child. He admitted to her that he likes her because she reminded him of a girl that saved him.

One day she went to another castle with the prince.

One day she went to another castle with the prince. Even though he spent a lot of time talking to the princess he told her that he would never get married to her because he needs the girl that saved him.

Everything changed when a new princess arrived. She reminded him so much of the girl who saved him that he decided to marry her. The mermaid new she would die the next day so she decided to spend her last night dancing on the boat. She saw her sisters that cut their hairs. They told her that they gave their hair to the witch so that she wouldn’t have to die the next day. She got a knife and she was supposed to stab the prince with it and as soon as his blood would drop onto her feet she would turn into a mermaid and she would live for 300 years.

When she approached the prince she wasn’t strong enough to kill him. She threw away the knife and jumped into the sea. She was waiting for her death. She talked to the fairies and they told her that a mermaid can only be immortal if she finds her soul mate. The little Mermaid finally raised to the world of air ghosts, saw the prince for the last time and went towards the clouds.